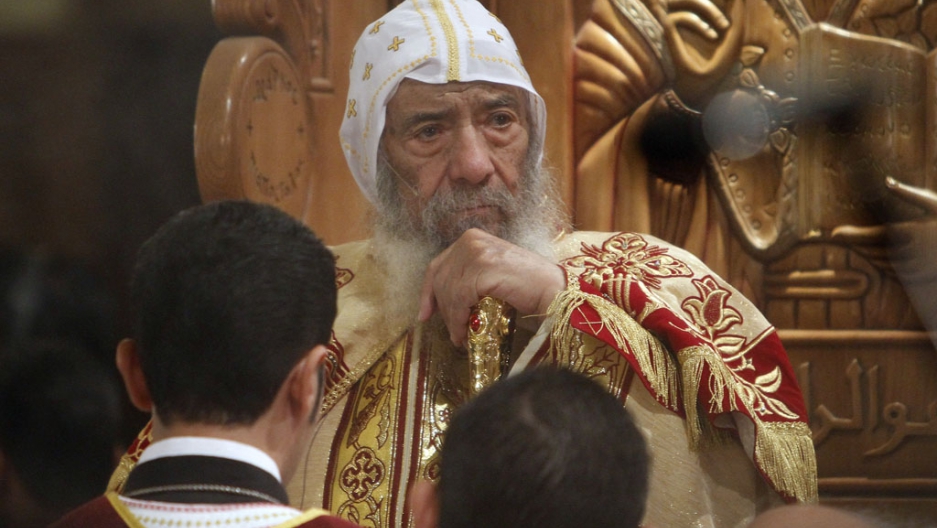 CAIRO, Egypt – Tens of thousands of Coptic Orthodox Christians streamed into the Abbaseya cathedral in downtown Cairo on Sunday and Monday to grieve for their patriarch, Pope Shenouda II, 88, who died over the weekend after battling a long illness. At least three people were killed in a stampede of mourners on Sunday, state television reported.

The death of the leader of Egypt's Coptic Christian population comes at a precarious time for the minority group. While they make-up 10 percent of Egypt's population of 80 million, they feel increasingly isolated as Islamists sweep to power in the wake of the uprising that ousted Egyptian President, Hosni Mubarak, last year.

While Pope Shenouda, who was appointed in 1971, came under fire for cozying up to the Mubarak regime in the later years of his tenure, he was largely seen as a stalwart protector of the Christian population and campaigned vigorously for Coptic rights.

From an article in the Seattle Times:

"Every Copt is asking the other, 'What are we going to do now? How are we going to survive? Are they going to cleanse us from this country because this wise man is no longer here?' " said Ihab Aziz, president of the Coptic American Friendship Association, who left his home in Washington and returned to Egypt a year ago to fight for the inclusion of Coptic rights in the revolutionary agenda.

During the parliamentary elections last winter, Coptic Christian voters in the Egyptian governorate of Beni Suef said they felt unsafe and did not trust the Islamist politicians they expected to secure the polls (and whom later did).

Read more from GlobalPost: Egypt’s Copts feel discrimination, but many afraid to react

Just two months before, in Oct. 2011, an army crackdown on a largely Coptic Christian protest outside the state television building at Maspero left at least 25 dead. On the heels of a car bomb attack on a church in Alexandria at midnight on New Year's Eve the year before, it was one of the worst sectarian incidents in recent memory.

“If the Muslim Brotherhood and Al-Nour come to power, there will be religious problems,” said Salwa Gaber, an older Christian woman from Beni Suef city. “They will impose an Islamic state, and we don’t want this. When I was growing up, Muslims and Christians were sharing this country. Now there are differences.”

Check out this set of very moving photos from the cathedral in Cairo over the past several days.