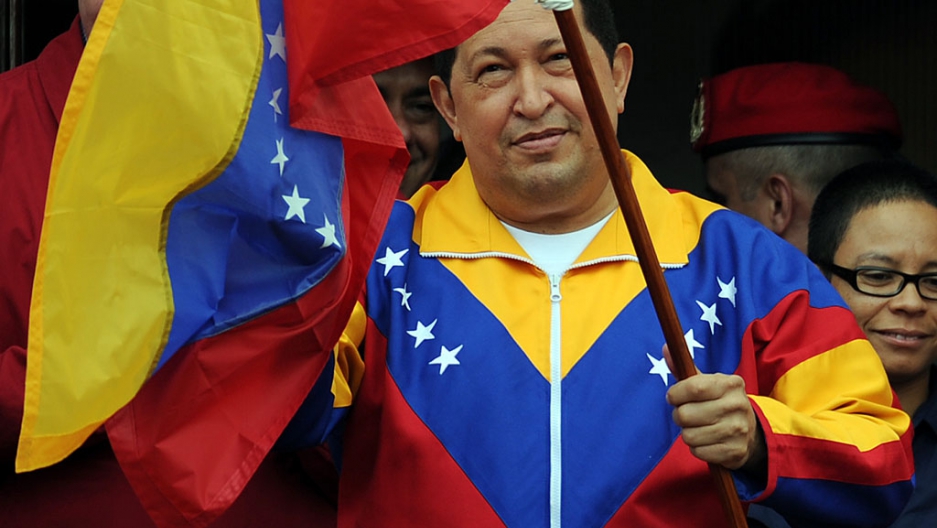 Venezuelan President Hugo Chavez waves a national flag from a balcony of the presidential palace in Caracas on March 17, 2012. Chavez has returned to Venezuela after spending three weeks in Cuba where he underwent cancer surgery.
Credit: JUAN BARRETO
Share

President Hugo Chavez landed back in Venezuela late Friday night before entertaining "el pueblo" (the people) on Saturday in his inimitable style — singing, cracking jokes and confirming to the nation that he is firmly in the game for October's presidential election.

Chavez was in Cuba for three weeks, recovering from the removal of a tumor in a recurrence of the illness that left his government rudderless last June. It comes at a poor time for the socialist president, as he campaigns for another six-year term.

Hundreds of red-clad supporters came to welcome Chavez back home under the People's Balcony at his Miraflores presidential palace on Saturday. He sang folk songs as well as a softer version of the National Anthem, before proclaiming to the crowd: "I put my life into serving the people of God, those who suffer most, the needy, because that is our mission and the essence of the socailist revolution."

The president spoke about his meetings with Cuba's Fidel Castro, in which the pair discussed the merits of river fish against sea fish. It is a well-worn display and reminiscent of a similar triumphant homecoming after treatment in June last year on the same island.

As elections loom, however, Venezuelans are asking whether the president can continue to govern. Speculation is fueled by the lack of public information about the type of cancer Chavez is suffering. More treatment will be required over the coming months.

Henrique Capriles Radonski is the opposition leader and will take Chavez on in October's vote. He has played a clever game by remaining quiet on the subject of his rival's health, solely wishing him well. To win, Capriles must woo those in Venezuela who are undecided whom to vote for as well as those who perhaps supported Chavez in the past but have become disillusioned with him.

Chavez mentioned the election in Saturday's speech from Miraflores. "The streets belong to the people, not the bourgeoisie!" he said. "This battle will be hard, but we will win!"