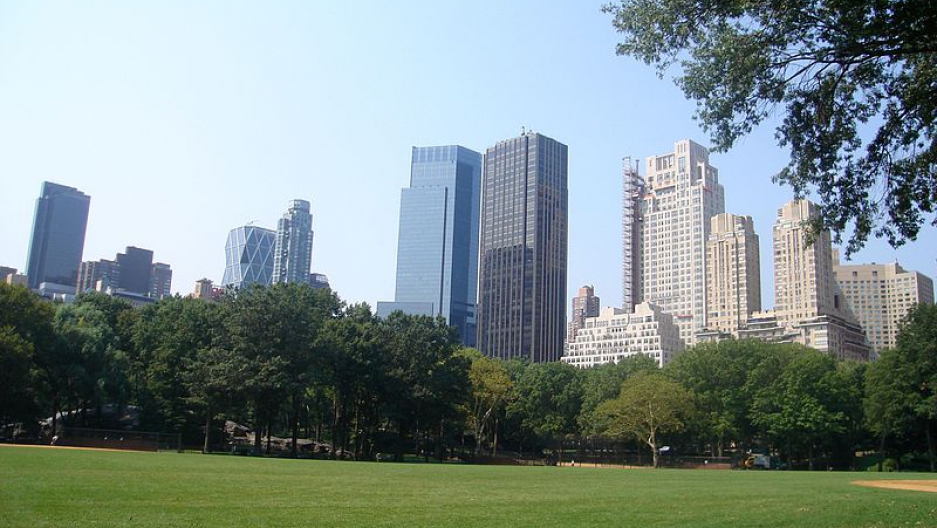 A survey from the U.S. Forest Service found that each tree in New York City is worth about $209 in terms of the costs they save and carbon they scrub the environment. (Photo by Umberto Fistarol via Wikimedia Commons.)

As Nowak tells it, not only do tree roots and leaves clean our air and water, the canopies cut energy costs, lower our fast paced, urban stress levels, and beautify our cities. Problem is: America is losing its urban forests. According to Nowak, last year alone, our cities lost about four million trees.

And that's a problem. Trees help clean the water by intercepting water and reducing runoff, they take in carbon dioxide, they shade buildings and reduce air temperatures in cities. They also produce wildlife habitat, and have effects on human health by changing air quality by people viewing vegetation, they become more relaxed, Nowak said. One study, from New York, shows that the value of the city's trees is $122 million, or $209 per tree in terms of carbon sequestration and other reduced costs.

Nowak's office is using satellites to compare images of urban tree cover from today with images from five years ago.

"We’re showing that most of the cities in the country are showing a decline in urban tree cover," he said. "We really don’t know exactly what it is. This trend of loss is both trees coming in and trees going out, so people are planting trees, trees are naturally regenerating, but we’re also losing trees to old age, to insects and disease and to development and the net change of what we’re looking at, it’s a trend of going downward."

The research looked at 20 urban areas and found, on average, the cities are losing three percent of their tree cover per year. Big losers included New Orleans, not unexpectedly because of Hurricane Katrina, Houston, Albuquerque, Baltimore and Atlanta. Just one city that was studied, Syracuse, showed an increase in tree cover.

"It’s a combination of those natural factors, of those insects and diseases, and human factors, of development or people’s choices," Nowak said. "The reason that Syracuse has gone up is because of an invasive shrub, European buckthorn, has almost tripled in population in the last five to ten years. Syracuse had a Labor Day storm in 1998 that took out a lot of trees so it created more space."

Nowak said the easiest thing people can do to help the problem is simply to plant a tree. But there are other ways to help as well.

"There’s often reasons new trees don’t come in," Nowak said. "Particularly in the east coast of the United States, we prevent trees from coming in, we mow our lawn, we put impervious surfaces down."

Nowak's office also put together a mobile app, called iTree, that lets people measure their forests and understand their impact.

"You can sketch an iTree design of your house and your backyard online and put a tree around there and get a quick estimate of benefit in terms of energy conservation, other benefits that it provides," he said.

It's free, but an update coming this spring will allow the phone to gather data and then upload it to an online program.

"We’re hoping to get people to measure and engage school kids and homeowners to understand their landscape and help make decisions for a better future," he said.