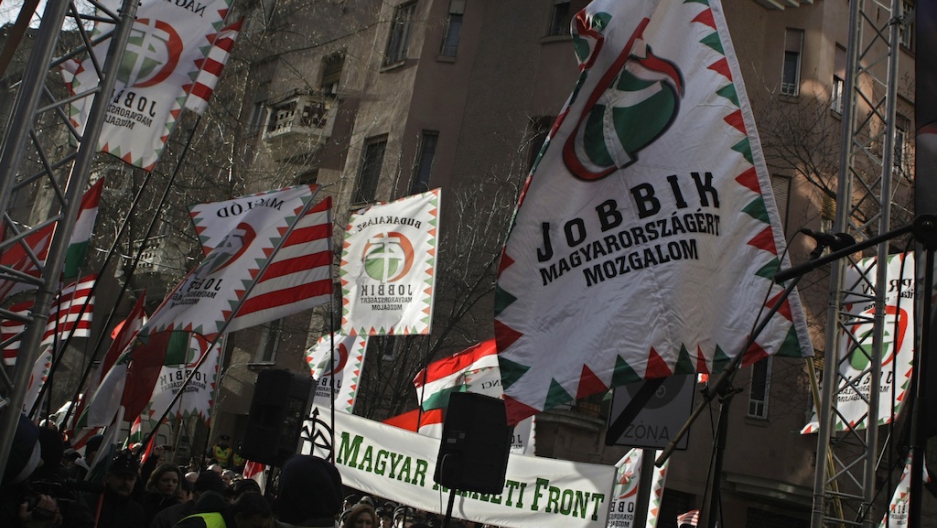 People wave flags during a demonstration untitled 'To be members, or to be free?' and called by right-wing parliamental party 'Jobbik' against European Union in front of the European Union Parliament and Commitee headquarters in downtown Budapest on January 14, 2012. European Commission head Jose Manuel Barroso said on January 12 he would do everything in his power to get Hungary to abide by EU laws, amid arm wrestling with Budapest over its new constitution. The banners read: (R) 'Jobbik the Hungariam Movement'.
Credit: FERENC ISZA
Share

These are troubling times for Hungarians. Widespread corruption, economic misery, a national press with its hands tied and a government that seems to be unpopular with everyone, no matter what side of the political spectrum, have created a deep pessimistic sense about whether Hungary will ever bounce back.

You don't hear much about the tiny central European country, but it's not because nothing happens there. For almost ten years, the economy has been in shambles, which has affected everything from bread prices to infrastructure projects to public education and jobs, almost all of which have resulted in riots and rising crime. Hungarians are as fed up as ever, and when I read the news I'm almost glad my revolutionary grandfather isn't alive to see what's become of the country he fought a war to protect.

Hungary’s Prime Minister and a super-majority parliament rewrote the constitution in January, making changes to press and religious freedoms, and even going as far as to rename the country, from the “Republic of Hungary” to just “Hungary,” without voter support. Shortly thereafter, a concerned European Union began proceedings to enact a provision of the Lisbon Treaty that would effectively begin baby-sitting Hungary’s government until a decision can be made about whether to punish the country by restricting their voting rights at the EU. On Tuesday the EU announced that it would cut $655 million in aid as a penalty for Hungary's inability to trim its budget deficit.

Prime Minister Viktor Orban’s moderate-right Fidesz party has seen a public backlash to governmental changes in the form of large protests, the likes of which haven’t been seen in decades, but the financially-addled government stands rigid against the pushback.

It’s not just the government’s rash changes that make journalists and the EU nervous, however. Jobbik, the far-right party has been gaining ground in recent years, pushing for racist anti-Roma legislation and a militant nationalist agenda. They are well-known and recognizable for t-shirts and uniforms with Nazi or Arrow Cross insignias and rabble rousing in the villages and universities.

My immediate maternal family left Hungary during the 1956 revolution because my grandfather refused to inform on his friends and neighbors. They were moderate conservatives, capitalists in favor of democracy, which didn't sit well with the invading communists. I still travel to Hungary often, and I visit Budapest and the village my grandfather grew up in outside of Miskolc, where we still have family friends.

In 2009 I was considering moving to Budapest to report on the political situation. I was ultimately dissuaded by an acquaintance at the Budapest Sun, the city's English language daily, who told me reporters were facing an increasing threat from a hostile government. But even before that, my ears were filled with stories from the villages of Roma who broke into homes in the middle of the night and tortured elderly people for money and jewelry, stole chickens and livestock, and abused public school teachers who didn't give their children good grades.

It was these stories that made me want to correct the narrative of the Roma with accurate reporting to counteract what was then the whispers of the Jobbik party. No one in the western press was paying attention to Hungary unless there was a riot, or an overdue IMF loan. But I didn't stay. No one else reported on the issues. And Jobbik's favorability numbers rose very quickly.

How Jobbik rose to power

In a particularly concerning turn, Jobbik polled high with youth voters in the last election, where they picked up 21 percent of voter support, which ties them with the traditionally youth-driven Socialist party. They’ve become incredibly popular, and most attest this to their frank (albeit offensive) rhetoric about Roma and their stance against the European Union, as well as their internet savvy, alternative press, and summer concerts and festivals, all of which make it easy for middle class students to embrace Jobbik ideas.

For a thousand years, Hungarians and Roma have had a contentious relationship. The actual percentage of Roma in Hungary is disputed because of their nomadic culture and an ineffective census system. Some experts put the number at 8 to 10 percent of the Hungarian population, while others say it's closer to 15. But estimates predict that by 2050, the numbers will double. As the EU countries develop in the 21st century, fewer people have children, while the Roma have more. Hungary isn't alone, and the question has lingered across the continent: How do you integrate a marginalized ethnic minority into a society it’s not clear they want to be a part of?

Instead of lofty ideas about social programs, Jobbik preys on the emotional instabilities of the frustrated citizenry, publicly referencing terms like “cigánybűnözés” - literally, gypsy crimes, like the ones I heard about in the village - and Roma reliance on taxpayer money. According to a New York Times article, unemployment for ethnic Roma is close to 80 percent.

I spoke to Erik D'Amato, editor and CEO of the All Hungary Media Group, an English language blog network, about the rise of Jobbik and their race-driven platform.

“Jobbik is more talk than action against the Roma,” said D'Amato. “But the Roma are different from other Hungarians, and it's a real thing. There's self-delusion on the part of outsiders to think there isn't a fundamental difference between these two groups. It’s tribal breakdown.”

Cigánybűnözés is a term one used to hear in the drawing rooms of bourgeois Budapest, but Jobbik has not only called out the phenomenon - that Hungarians believe there are certain crimes only Roma commit - but say they will work in government to deal with the problem. Even families like mine, which faced terrible atrocities during both the Arrow Cross and Communist regimes, believe the Jobbik party line.

According to D'Amato, even liberals are guilty of perpetuating the divide between the Roma and Hungarians, but Jobbik takes it a step further. “I draw the line of racism where people are like, it's in the Gypsies’ blood to steal and their children will be criminals,” he said. “But there is a culture of crime, and it's not racist to point that out. Jobbik has picked up a lot of support because it's the common sense approach. People pull away from the main parties because they feel like they're being insulted.”

You should start paying attention

A recent study by British think tank Demos [PDF] and Hungary’s Political Capital Institute that targeted youth on Facebook for a survey, reports that Jobbik enjoys enormous off- and online support with the youth, many of whom have grown up hearing parents talk about cigánybűnözés behind closed doors, and can relate to the familiar rhetoric.

It's particularly alarming that most of Jobbik's supporters are middle class, educated students, the opposite of the usual blue collar background extremist parties generally solicit, and like young people all over the world, members of the Jobbik party are active on social media and voice their opinions loudly.

“Jobbik Facebook fans are more likely to think that violence is justified if it leads to the right outcome,” reported D'Amato’s political website politics.hu. “[Jobbik Facebook fans] are more likely to be negative towards the EU than their fellow Hungarians. Asked about what the EU meant to them, 68 percent said it was ‘the loss of cultural and national identity,’ compared with just 5 percent of all Hungarians.”

Many on the young right even suggest Hungary is being “colonized” by the EU, and are pushing to withdraw the country’s membership, according to the Hungarian Ambassador to the US, although Fidesz says they're against the idea. My own cousins sometimes reflect this view as well, because to them, it seems since joining the EU, Hungary has gotten increasingly worse, in all possible ways.

An anonymous blog written by a native Hungarian, The Contrarian Hungarian, in a psychological profile on Jobbik supporters wrote, "while the majority of Jobbik voters are students, workers, and the young unemployed (a bit less than two-third of them are men, and only 37% of them are women), they identify themselves as 'middle-class.' The roots of their nationalist sentiments probably also signify a similar escapism into a by-gone era of presumed national glory."

It's these demographics specifically — youth and middle class workers — that will determine the next few Hungarian elections, and as their support for Jobbik grows, so will the possibility of an explosive political situation in Central Europe.

Despite Jobbik stroking fears in the EU and the press, the American Hungarian Federation has defended Hungary’s government, accusing the foreign press and governments of unfair criticism, by sending a letter to the US House Committee on Foreign Affairs. The Committee is sending a delegation to Hungary to investigate for itself the extent of freedom restrictions in the country. There hasn't been a release on the committee's findings yet, but it won't be surprising when the report shows just how dangerous the Hungarian political situation has become.

This is a video produced ahead of the 2010 elections in support of the Jobbik party. It is graphic, viewer discretion advised.