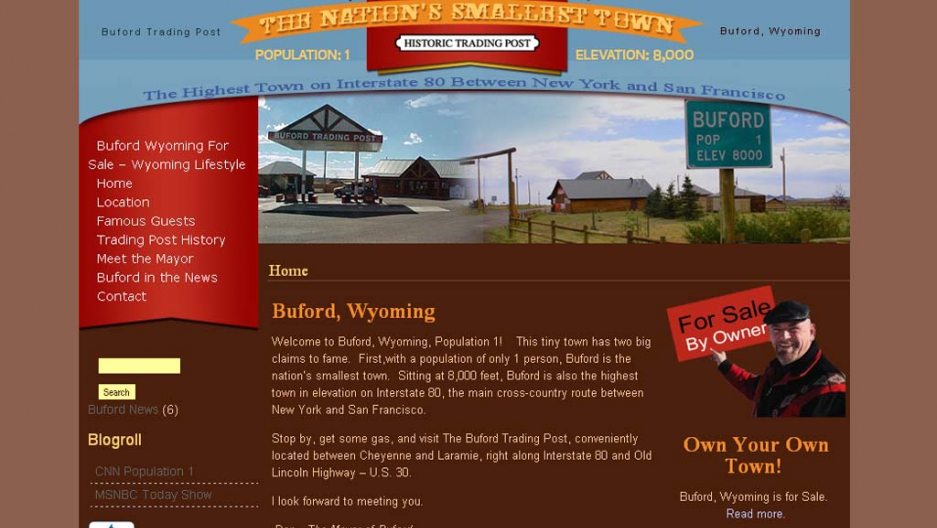 Buford, Wyo., advertised as the smallest town in the U.S. with just one resident, is going on the auction block next month.
Credit: Buford Trading Post
Share

A town in Wyoming advertised as the smallest in the U.S. is up for sale next month.

Buford, located between Cheyenne and Laramie in southeast Wyoming, has just one resident, Don Sammons, who has run the Buford Trading Post for the past 20 years, The Associated Press reported.

Sammons told the AP he plans to retire and move on. The auction is set for noon on April 5.

Sammons and his family moved from Los Angeles to Buford in 1980. Family members moved away over the years, but Sammons stayed on as sole resident and "mayor" of the unincorporated community. He bought the trading post in 1992 and operated it until last year, the Wyoming Tribune Eagle reported.

"It was a great life for me and for my family," he said.Assets up for sale will include a gas station and convenience store, a 1905 schoolhouse that has been used as an office, a cabin, a garage, 10 acres of land and a three-bedroom home, according to the auction listing by Williams & Williams.

Buford traces its origins the 1860s and the construction of the Transcontinental Railroad and had as many as 2,000 residents before the railroad was rerouted, according to the AP.

The town has its own ZIP code and post office boxes for people who live nearby.