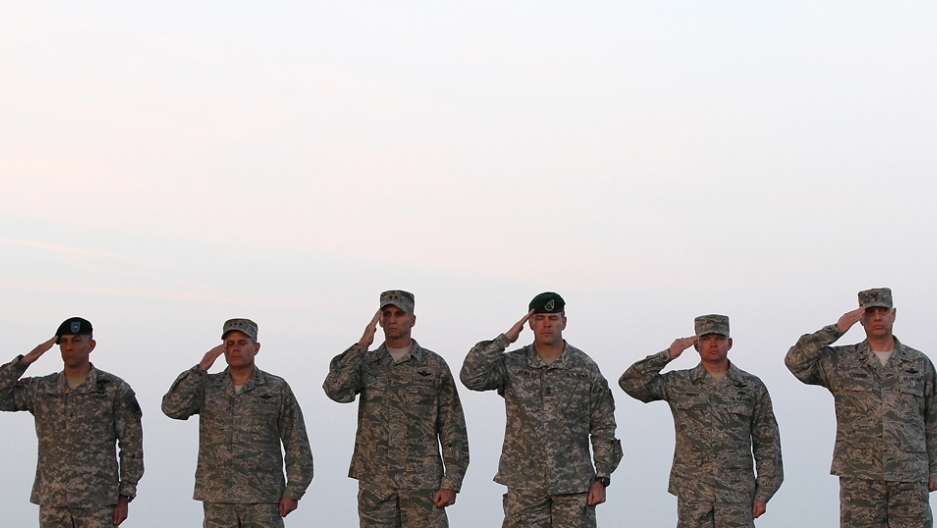 A US soldier allegedly left his base in Afghanistan Sunday and went door-to-door shooting Afghan civilians, killing 16 and leaving both Afghanistan and America reeling. While the incident has sparked outrage at home and abroad, this is hardly the first time that members of the US armed forces have been accused of committing atrocities on the ground.

Here, we look back at five other shocking incidents that left their mark on America's military history. What incidents are we missing? Leave your comments below.

In 1950, the United States intervened in the Korean War in defense of the South, but its forces were undertrained and underprepared, according to the BBC. The North's attacks created a severe refugee crisis, and as thousands of Koreans clogged the battlefield as they fled war-torn areas, the US forces panicked.

On the same day that the US Army delivered a stop refugee order in July 1950, around 400 South Korean civilians were killed in the town of No Gun Ri by US forces from the 7th Cavalry Regiment. The soldiers argued they thought the refugees could include disguised North Korean soldiers.

Many refugees were shot while on or under a stone bridge that ran through the town; others were attacked with bombs and machine-gun fire from US planes, the BBC reported. The ordeal lasted for three days, according to local survivors and members of the Cavalry.

"There was a lieutenant screaming like a madman, fire on everything, kill 'em all," veteran Joe Jackman recalled, according to the BBC. "I didn't know if they were soldiers or what. Kids, there was kids out there, it didn't matter what it was, 8 to 80, blind, crippled or crazy, they shot 'em all."

The Associated Press broke the news of the massacre in September 1999. It has come to be known as one of the largest single killings of civilians by American forces in the 20th century.

On March 16, 1968, the Charlie Company, 11th Brigade entered the village of My Lai, in an area of Vietnam where many members of the American brigade had been maimed or killed by Viet Cong forces, PBS reported. The troops ended up killing over 300 civilians under orders from their Lieutenant, William Calley, who told his men to enter the village firing, though there had been no report of opposing fire, PBS reported.

According to eyewitness reports, several old men were bayoneted, praying women and children were shot in the back of the head, and at least one girl was raped and then killed.

The story did not reach the American public until journalist Seymour Hersh published a story detailing his conversations with a Vietnam veteran, Ron Ridenhour, in November 1969. The massacre raised significant questions about the conduct of American soldiers and their leaders in the field.

In 2004, the world was shocked when photos were released of American soldiers abusing Iraqi prisoners at Abu Ghraib, a sprawling prison west of Baghdad which was notorious for its frequent torturing sessions and executions under Saddam Hussein, the New York Times reported.

The photos, which showed Iraqi detainees being beaten, abused and sexually assaulted, fueled Arab and Muslim rage against the United States, and were used as a powerful tool to recruit insurgents in Iraq and elsewhere, according to the Times.

Nine US soldiers were found guilty in the abuse case, which also fuelled multiple other military and Congressional investigations. Former President Bush proposed to destroy the complex after the crimes were uncovered, but an American military judge ordered that it be preserved as a crime scene, the Times reported. In March 2006, the military announced that it would clear out all remaining prisoners from Abu Ghraib.

In February 2009, the prison was reopened under a new name, Baghdad’s Central Prison, and promises of humanitarian conduct.

On November 19, 2005, a group of US marines killed 24 unarmed men, women and children in the city of Haditha in Western Iraq. Staff Sgt. Frank Wuterich admitted to telling his men to “shoot first and ask questions later," and the massacre is believed to have been an act of revenge for an attack on an American convoy that killed a marine, according to the New York Times.

Upon his release, Wuterich addressed the family members of the Iraqi victims.

"I wish to assure you that on that day, it was never my intention to harm you or your families. I know that you are the real victims of Nov. 19, 2005," he said, according to CBS.

More from GlobalPost: Frank Wuterich, Marine tried in Haditha case, gets demotion and pay cut, but no jail time

Residents of Haditha were angered by the fact that not one of the eight Marines was convicted.

"I was expecting that the American judiciary would sentence this person to life in prison and that he would appear and confess in front of the whole world that he committed this crime, so that America could show itself as democratic and fair," a survivor of the killings, Awis Fahmi Hussein, told CBS.

The incident was compared by many in the media to My Lai.

On August 22, 2008, Afghan civilians who had gathered in a small village for the memorial ceremony of a militia leader were killed by airstrike by US and Afghan soldiers, who were on an operation in the area to pursue Taliban commander Mullah Siddiq, according to the New York Times.

The airstrike's estimated casualties varied widely between 30 and 90, according to conflicting accounts from American troops, aid workers, local villagers, and a report made by the Afghanistan government.

The Pentagon described the attack as "a legitimate strike against the Taliban" and questioned the casualty estimates given by the government of Afghanistan and reported by the media. The US military originally denied that any civilian casualties had occurred, but later acknowledged after the release of a cell phone video that some civilians may have been killed, and announced it would investigate the incident, the Associated Press reported.

In 2009, Mohammad Nader, a villager from Azizabad, was sentenced to death for giving incorrect information to soldiers about Siddiq's location, the Daily Telegraph reported.

"You, Mohammad Nader, are sentenced to capital punishment for spying for foreign forces and giving wrong information that caused the death of civilians," said judge Qazi Mukaram, according to the Telegraph.

"The US still needs to change its policies and practices on airstrikes to end the string of attacks that have caused so much loss of civilian life," said Brian Adams, head of Human Rights' Watch's Asia division, which launched its own inquiry into the attacks. "Otherwise the planned arrival of 20-30,000 more troops in Afghanistan may lead to greater, not fewer, civilian deaths."