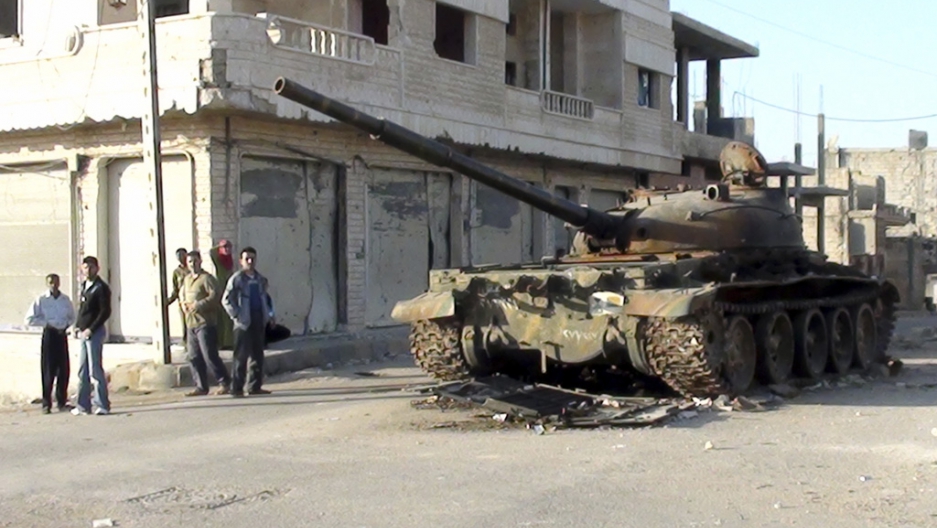 Syrians stand next to an abandoned army tank in the city of Rastan, near the flashpoint city of Homs, on Friday.
Credit: -
Share

Syria’s army is too large and too well equipped, and recent defections not nearly important enough to slow the growing crisis there, US intelligence experts told The Washington Post today.

Diplomatic pressure on President Bashar al-Assad is having little effect, the officials said, and the only hope for a quick resolution to the bloodshed is economic sanctions.

In the most comprehensive, telling comments since the Syrian uprising began a year ago, three senior US intelligence experts said those closest to Assad are “remaining steadfast.”

The experts said the Syrian army has increased its attacks on civilian sites such as mosques, hospitals and schools to kill Free Syrian Army forces they believe are hiding there.

“Restraint … has been lifted,” one official said, according to The Post.

CNN said recent defections from Assad’s government and military are having little effect, and there are reports Al Qaeda is complicating the situation by infiltrating opposition forces.

US experts don’t know the extent of Al Qaeda’s presence, CNN said, and aren’t sure the terrorist organization is even welcomed in Syria.

Poor organization is hampering the uprising, the officials said, and poor communications make it difficult to mount a sustained attack.

“This leadership is going to fight very hard,” an official said, according to CNN. “Assad is very much in charge of how Syria is handling this.”

The information from the American intelligence officials came as the White House released more satellite photos of the devastation in and around the city of Homs and the Baba Amr neighborhood.

Before the conflict began, Syria boasted an armed force of 330,000 with access to advanced weaponry supported by Iran and Russia.

The security experts said Syria has a “dense” air defense network with advanced radar, anti-aircraft guns and surface-to-air missiles enough to deter western forces from intervening as they did in Libya.

Syria is less than 1/10th the size of Libya with an army four times the size, the Post reported.

The Assad regime also has access to unmanned drones to monitor opposition movements as well as software to track any social media efforts that might organize rebels.

“This is an army that was built for a land war with the Israelis,” one US official said.

The fastest way to end the conflict might be economic sanctions. Fuel and food prices are rising along with unemployment.

It’s just not going to happen immediately, one intelligence official told The Post.

“To this point, we have not seen that having an effect on the regime’s ability to prosecute the war.”