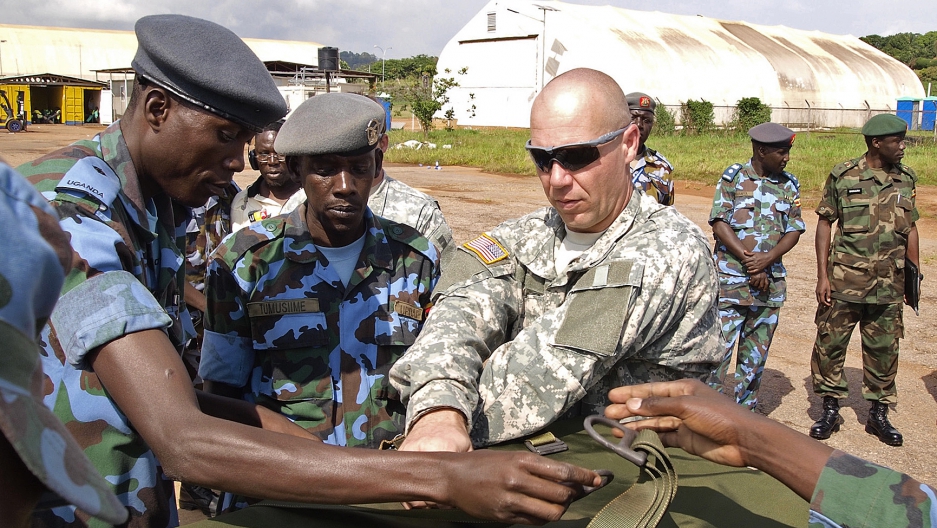 US soldiers assist Ugandan military personnel in the fight against the LRA. Encouragement of an American military presence in Uganda is a sticking point with critics of the Kony 2012 campaign.
Credit: AFP
Share

With the explosion on social media sites of an activist viral video, Kony 2012, exposing the misdeeds committed by Lord's Resistance Army (LRA) leader Joseph Kony, critics have reacted to the campaign denouncing it as "colonial" and reminiscint of Kipling's "White Man's Burden" argument.

The video and campaign were created by Invisible Children, a non-profit and documentary-maker hybrid group that has worked on drawing attention to the Ugandan rebel group's atrocities.

Read more about Invisible Children and its work on GlobalPost: Viral campaign "Kony 2012" set to take down war criminal

Although the group's new campaign to expose Kony and have him tried by the International Criminal Court has received immense support from celebrities and policymakers, critics of the filmmakers and their viral video are not in short supply.

Here are some of the main complaints both new and old of Invisible Children and their campaign against the LRA:

1. The campaign dumbs down the conflict while exaggerating the crimes committed by the LRA:

The Africa blog, Unmuted, wrote Wednesday of the campaign, "This approach obviously denies realities on the ground, inflates fantasies abroad, and strips Ugandans of their agency, dignity and humanity- the complexity of their story and history."

While Foreign Affairs wrote last year that campaigns against the LRA, such as that of Invisible Children, "have manipulated facts for strategic purposes, exaggerating the scale of LRA abductions and murders and emphasizing the LRA's use of innocent children as soldiers, and portraying Kony -- a brutal man, to be sure -- as uniquely awful, a Kurtz-like embodiment of evil.

The magazine goes on to say that Invisible Children, "rarely refer to the Ugandan atrocities or those of Sudan's People's Liberation Army, such as attacks against civilians or looting of civilian homes and businesses, or the complicated regional politics fueling the conflict."

2. The campaign supports US military intervention in the region:

The blogger, Michael Kirkpatrick writing on The Independent, a Ugandan website, in September 2010, said that Invisible Children's previous campaign, "legitimises the mission of AFRICOM on the continent and gives military forces a home base in Africa to continue the global battle on terrorism, combat the growing presence of China, and defend American interests regarding natural resources."

On Wednesday, Visible Children blog, a site set up to criticize the campaign, wrote, "The group is in favour of direct military intervention, and their money supports the Ugandan government’s army and various other military forces.... Both the Ugandan army and Sudan People’s Liberation Army are riddled with accusations of rape and looting, but Invisible Children defends them, arguing that the Ugandan army is “better equipped than that of any of the other affected countries”, although Kony is no longer active in Uganda and hasn’t been since 2006 by their own admission.

3. The campaign echoes colonialism and the "White Man's Burden" mentality:

On his blog, Yale Professor Chris Blattman wrote in 2009 that, "There’s also something inherently misleading, naive, maybe even dangerous, about the idea of rescuing children or saving of Africa. It’s often not an accidental choice of words, even if it’s unwitting. It hints uncomfortably of the White Man’s Burden. Worse, sometimes it does more than hint."

On Wednesday, the blog, Umuted, wrote, "if you have watched the Invisible Children video and followed the organization’s work in the past, you will note a certain messianic/savior undertone to it all. “I will do anything I can to stop him,” declares the founder in the video. It’s quite individualistic and reeks of the dated colonial views of Africa and Africans as helpless beings who need to be saved and civilized."

4. The non-profit, Invisible Children, is shady with its finances and business practices:

The Visible Children blog accuses the non-profit of wasting money and being opaque with its finances: "Invisible Children has been condemned time and time again. As a registered not-for-profit, its finances are public. Last year, the organization spent $8,676,614. Only 32% went to direct services, with much of the rest going to staff salaries, travel and transport, and film production. This is far from ideal for an issue which arguably needs action and aid, not awareness."

On its website, the Better Business Bureau stated that Invisible Children had failed to undergo a check by Wise Giving Alliance, which uses voluntary standards to determine if the non-profit follows some basic guidelines on charity finances and governance. It states, "While participation in the Alliance’s charity review efforts is voluntary, the Alliance believes that failure to participate may demonstrate a lack of commitment to transparency. Without the requested information, the Alliance cannot determine if this charity adheres to the Standards for Charity Accountability."