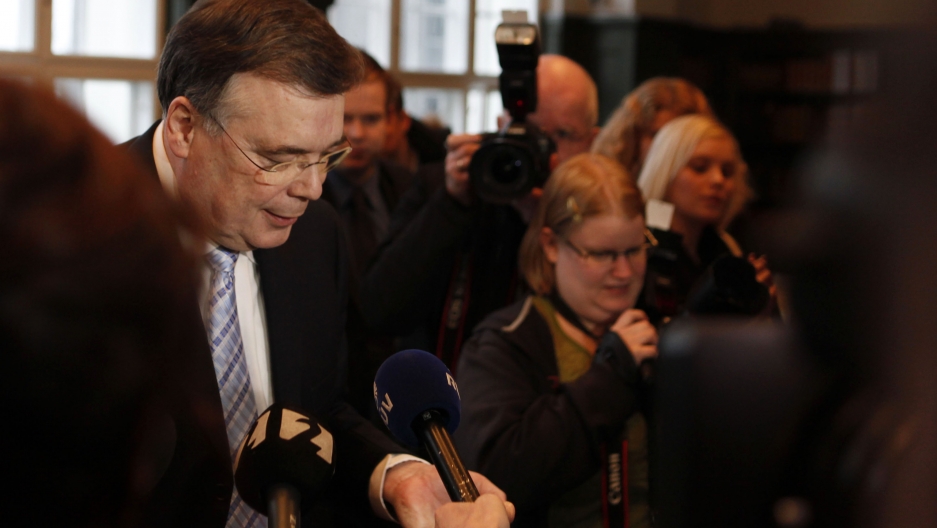 Geir Haarde, Iceland's former prime minister, speaks to the media in court in Reykjavik March 5, 2012. Iceland began Haarde's trial on Monday for failing to prevent a 2008 financial crash, thought to be the only prosecution in the world of a pol

The first world leader to go on trial for his role in the global economic crisis that began in 2008, former Icelandic Prime Minister Geir Haarde appeared in court on Monday, in Reykjavik, Iceland.

Haarde pleaded not guilty to negligence. He is accused of not doing enough to ensure the financial stability of Icelandic banks that collapsed and dragged down the rest of the country with them. He said before a special tribunal Monday that his conscience was clear. It wasn’t his fault, he said, that Iceland’s three main banks collapsed.

Whether it's his fault, will be a matter for the tribunal. But how it happened seems well understood now. First, they borrowed heavily, said Trevor Williams of Lloyds Bank Corporate Markets, in London

“International flows of money into Iceland were huge,” he said. “They used that money to leverage, then bought a lot of assets overseas, and these assets fell dramatically in value.”

As did Iceland’s currency, the Krona, which plunged by 50 percent. That left thousands of Icelanders exposed, because many held loans and mortgages pegged to foreign currencies. Iceland’s three main banks were finished. Their collective debt: 13 times the country’s GDP. Creditors at home and overseas have been clamoring for repayment ever since.

For years now Icelanders have been debating who should pay, both literally and before the courts of justice. A handful of bankers are under indictment or already on trial for their role in the debacle. But Haarde is the first political leader to face a tribunal. The head of his conservative Independence Party, Bjarni Benediktsson, said charging the former leader was a mistake, because there was never criminal intent.

“I think all must agree that no one person can be held liable for what happened,” he said. We were hit by an international crisis. And we did what was possible to do.”

Benediktsson said, if anything, Haarde should be investigated, but not prosecuted. But member of Parliament Birgitta Jonsdotter said a lengthy investigation is precisely what landed Haarde in court. A parliamentary committee found that Haarde knew for several weeks that the banks were in trouble, but failed to act. Jonsdotter said the former prime minister is on trial as much for his inaction as for his actions.

“This will set a precedent to future governments and to future bureaucrats as well,” she said. “Because it’s been a tradition here that some people feel they are above the law. And that is very unhealthy in a small society like this.”

Though their former head of state could get up to two years in jail, people are hardly celebrating, said Icelandic journalist Gunnar Hrafn Jonsson.

“They don’t feel that things are getting better, even though they look better on paper for businesses and government,” he said. “So I think there’s a fundamental lack of trust with everything to do with politics and banks. We’ve been burned pretty badly.”

Iceland’s Krona has proven unstable since the 2008 crash. So much so that when Canada’s ambassador to Iceland quipped that the island nation might do well to adopt the Canadian dollar, Iceland’s foreign minister said the government was open to the idea.