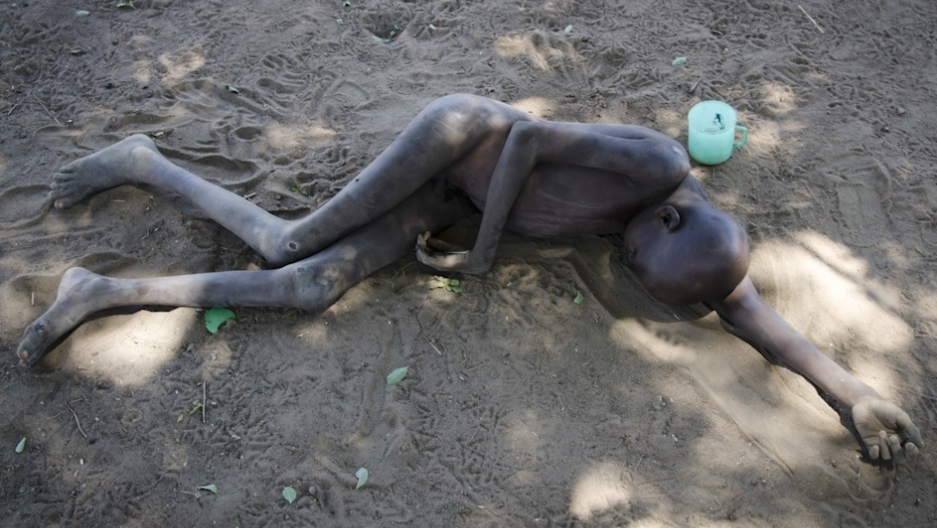 Patrick Anywar,14, who suffers from mystery illness Nodding Disease, lies in the dust outside his family home in northern Uganda. Scientists are struggling to find the cause of the ailment which the Ugandan government says has affected over 4,000 children in northern Uganda and claimed the lives of 200 in past few years.
Credit: Michele Sibiloni
Share

PADER DISTRICT, Uganda — A mysterious illness has killed 200 children in rural Uganda and has debilitated hundreds more, leaving doctors scrambling to find its cause and cure.

Nodding disease grips children by seizures in which their heads move up and down. The ailment prevents them from eating properly and many afflicted children become stunted physically and mentally.

Morrish Okwonga, 9, and Agnes Akun, 15, have nodding disease and they are noticeably quiet and listless as they sit under a mango tree by their family’s hut in northern Uganda.

“They don’t look so happy like the normal children," said their father, John Anywar. "They have changed so much. Sometimes they look like they are running mad.”

Agnes and Morrish’s dirt-stained clothes hang loosely off their scrawny bodies. Agnes contracted the disease in 2007 and her brother in 2009. Since they often get seizures that prevent them from eating, they are malnourished and small for their ages.

Their father said he has taken them to the doctor innumerable times. But given the enigmatic nature of the disease, it hasn’t done much good.

“It’s very frustrating because we are always going with them to the health centers and then the doctors come and get blood samples but unfortunately we have not got any help. They say they are still looking for drugs (to cure it),” says Anywar.

Nodding disease affects an estimated 4,000 children in northern Uganda and thousands more in South Sudan, according to the World Health Organization.

The disease, named for the uncontrollable episodes of head nodding that afflict sufferers, has killed at least 200 children in Uganda since the syndrome was first reported by the country’s health ministry in 2009.

Despite investigations by local and international researchers, experts are still largely mystified by the disease. The cause remains unknown and there is no cure.

Children with the disease exhibit a baffling array of symptoms.

Since the seizures are often brought on by food, sufferers find it difficult to eat. They become malnourished and mentally and physically stunted. The disease can also lead to blindness.

Often children with the disease become severely mentally disabled and are prone to accidents like burning, drowning and car accidents. Most deaths from the disease are attributed to these secondary causes.

“The clinical picture is quite strange,” said Dr. Emmanuel Tenywa, of the World Health Organization. “This is a new disease that we have not yet fully understood.”

Experts do have some leads.

In particular, they think nodding disease may be linked to the black fly-borne parasite that causes onchocerciasis, known as river blindness. “In the areas where these cases are reported, that is (also) where the highest prevalence of onchocerciasis cases are,” said Tenywa.

Researchers have also noted a severe deficiency of vitamin B6 among populations where the disease is prevalent.

The CDC is working with the Ugandan Ministry of Health to set up trials of various types of seizure medication as well as vitamin B6 supplements for the children affected.

As experts work to find an effective treatment, the disease continues to devastate communities in Uganda, where in some villages almost every family has a child with nodding syndrome.

“We do not want to say it’s a disaster, but the situation is bad and action has to be taken,” said Rukia Nakamatte, a spokeswoman for the Ugandan Ministry of Health.

At Jupa Primary School in Pader District, 59 out of 250 children have contracted the syndrome, according to head teacher Pacotoo Saidi. Four have had to drop out because of the disease.

The children in the school with the syndrome don’t perform well and sometimes experience seizures in class.

“You [will] find the child vomiting. You will find a lot of saliva coming from the mouth and a change in the eyes,” said Saidi. “It [is] as if somebody is struggling with death. There is nothing we can do except make sure he or she doesn’t get injured.”

He called 7-year-old Nancy Layet into his office to stand beside him at his desk. Like Agnes and Morrish, she is quiet and devoid of expression.

Agnes and Morrish had to drop out of school last year. Anywar, their father, said he wishes they could have continued but they were having too many seizures.

After years of seeing his children suffer with the disease he is starting to lose hope.

“We are just resigned to our fate," said Anywar. "It’s a similar thing everywhere in this area. There is nothing to do about it.”