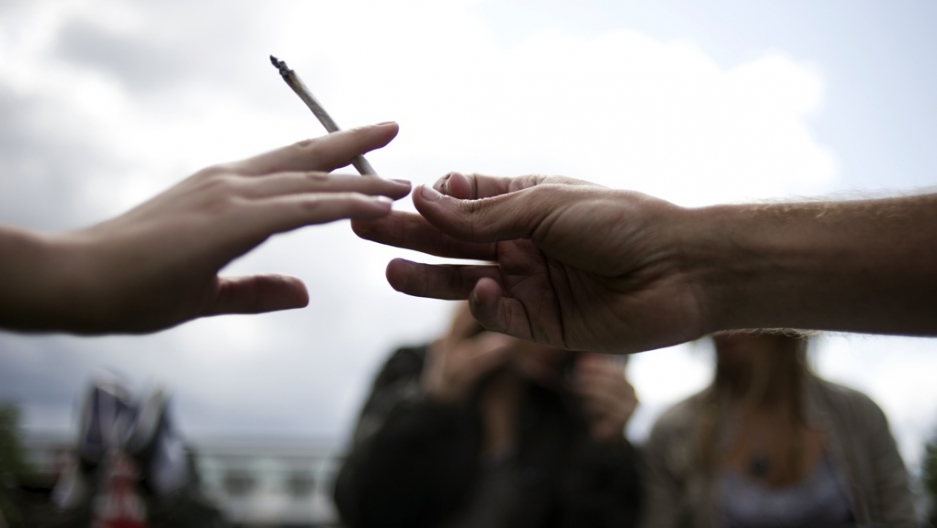 In recent comments Perez said he would propose decriminalizing drugs during April’s Summit of the Americas in Colombia as a strategy to combat powerful traffickers that use Central America as a warehouse and transit point for South American cocaine heading to the United States.

New legislation is unlikely anytime soon — and the details, such as which illicit drugs he means, are still unclear — but Perez has caught the region’s attention and has provoked a divisive response from US officials.

“We know it’s a difficult and polarizing issue,” Perez recently told journalists. “We are bringing it to the table and we want a serious debate about it.”

Murder rates have soared in recent years in Central America, driven in part by drug traffickers and street pushers who battle for routes and territories.

Four of the isthmus’ seven nations are among the world’s 10 most murderous with homicide rates up to 17 times those in the United States. Bloody Mexican cartels looking to prey on vast, unprotected land and corrupt institutions have brough their violent business here, where nearly half the inhabitants live in poverty.

The region’s leaders, with scant resources, have lobbied for more support from the United States to fight organized crime and have slammed the United States for not reducing demand for the drugs. A Republican-controlled US Congress hungry for aid cuts and a slow recession recovery have meant few increases in financial support, analysts say.

More from Guatemala: How did Mexico's cartels get here?

During a recent visit to Central America, US Secretary of Homeland Security Janet Napolitano defended her country’s firm stance against legalization and said the US would continue to fund the war on drugs.

“The United States does not view decriminalization as a viable way to deal with the narcotics problem,” Napolitano said. “We should be finding better ways to prevent someone from becoming addicted to illegal drugs and better ways to intercept the production or distribution of illegal drugs.”

In a statement, the US cited drops in Colombia’s murder rates after the US-funded Colombia Plan — a five-year, multi-billion dollar crusade against South American cocaine growers — as evidence that staunch law enforcement works.

Washington also spent $1.6 billion in Mexico under the Merida Initiative, according to the US State Department. That money has helped finance a drug war that has since 2006 resulted in the deaths of more than 47,000 people, according to Mexican prosecutors' statistics.

The US donated some $300 million to Central America in 2011 for security projects, but leaders facing an expensive and potentially deadly battle have begun to pool ideas in search of a new approach.

Salvadoran President Mauricio Funes, who favored the debate, said that decriminalizing drugs could cripple criminal profits, so long as it’s a multilateral approach.

“Our country is open to any proposal that will reduce drug production and contraband … which is the activity that organized criminals use to destroy our societies,” Funes said during a visit to Guatemala. “It must be a regional effort. If we only do it in one country, for example in Guatemala, then Guatemala will become a drug paradise,” he said.

More from the region: Guess which country is Latin America's secret growth story

President Laura Chinchilla of Costa Rica, where small amounts of marijuana for personal consumption are legal, said she is open to the discussion, joining Mexican President Felipe Calderon and Colombian head-of-state Juan Santos who have also clamored for a rethink of drug policy.

Perez, however, has not given up in the face of such doubt. The founding member of the right-wing Patriot Party, he has suggested legalizing the “transit, production and consumption” of illegal drugs and has sent Vice President Roxana Baldetti on a consensus-building mission to neighboring states.

The leaders have not yet said which illicit drugs should be legalized. When pressed on the specifics, Perez only responded that it should be an "integral" strategy.

Skeptics of the plan say that Perez, who is pressing the United States to re-establish embargoed military aid to Guatemala, could be using legalization as a threat in order to speed up army support, a risky move for a president looking for greater US backing.

More from GlobalPost: Mexico's drug war by the numbers

“It could push the US Congress to give them more money, or it could really upset Congress and they could cut aid all together,” said Heather Berkman, an analyst at Eurasia Group, a political risk consultancy. “I doubt this goes anywhere. Latin American leaders feel stuck and this is a move to get more resources rather than a real solution to improve their situation.”

Guatemala spends roughly $200 million per year on its drug war — small change compared to the estimated $30 billion in annual sales that the drug trade pulls in — and the Guatemalan Congress has never debated a legalization bill. A proposal to define a quantity for personal consumption of marijuana and levy a small fine on violators never advanced beyond legislative committees.

“Whatever his motives are, it seems more tangible now,” said Alejandra Garcia, a member of the left-leaning Meeting for Guatemala party. “We probably won’t see any new legislation in the next four years, but you never know. This is Guatemala. There are a lot of surprises here.”