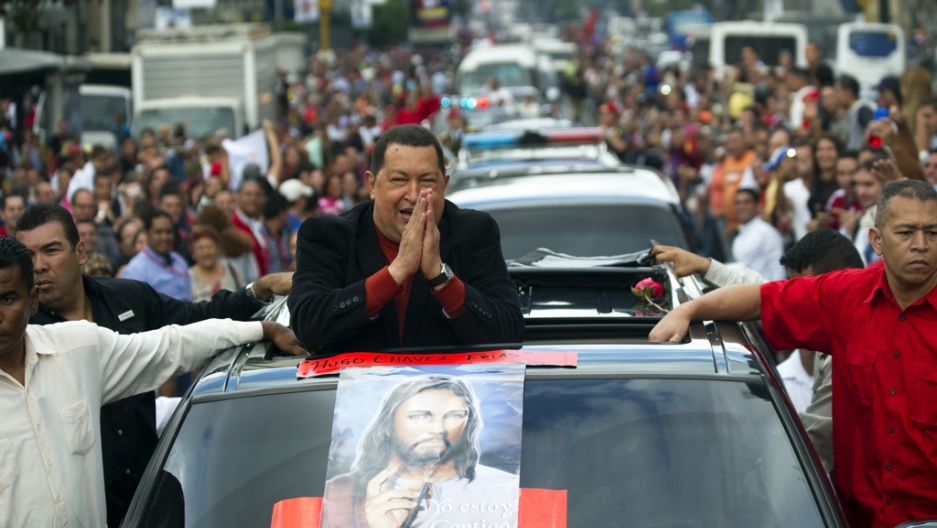 CARACAS, Venezuela — After leaving Caracas in an open-top motorcade and proclaiming that he recently dreamed Jesus had told him it wasn’t yet time to die, President Hugo Chavez’s no-doubt jubilant return from cancer treatment in Cuba is being eagerly awaited in Venezuela.

Chavez made his first public remarks on Thursday after an operation to remove a possibly cancerous growth, the Associated Press reports.

"I am doing well. Since the day before yesterday I am walking, roaming the hallways. I am on a good diet," Chavez said, the AP reported, citing a televised phone conversation from Havana. "Right now I'm preparing for the midday walk and later some pumpkin soup ... This morning a nice yogurt."

Of course, Venezuela has been here before. Last June, the maverick leader appeared on television, more solemn than ever, to announce to the world that he was suffering from cancer days before arriving back to Miraflores presidential palace in a blaze of glory. Just months later, he announced that he was “free” of his illness.

Then he got biblical.

“I am more and more Christian,” he said at the time. “Socialism is the way of Christ.”

That religious echo is a leitmotif through the current saga. “I dreamt a while ago of Christ who came and said ‘Chavez, rise, it is not time to die, it’s time to live,’” the president said last Thursday, before belting out folk tunes with supporters during more than five hours live on state television. The following day, his vehicle to Caracas’ Maiquetia international airport was plastered with an image of Christ.

Behind the gung-ho image portrayed by the paratrooper-turned-president, however, is a sense of fear that has not been seen before during his 13 years in power. “I’m not going to be able to continue with the same rhythm,” he said before he left for Cuba. “I’m a human being. I’m not immortal.”

And then the crunch: “Independent of my personal destiny, this revolution already has its own momentum and will not be stopped by anybody or anything.” For the first time during his tenure, Chavez spoke of a future for his Bolivarian Revolution of which he was not a part.

Chavez has molded his government in his own image over the last decade. Supporters don’t have an affinity with his United Socialist Party of Venezuela, (PSUV) but rather the man himself. They wear T-shirts emblazoned with his face rather than the party symbol. Indeed, he is the de-facto symbol, not only of the party but of the Venezuelan government and state.

Analysts have drawn out a few names for the contender should Chavez be unable to continue in power. National Assembly President Diosdado Cabello is a faithful ally of Chavez and indeed has his own more personal battle with Henrique Capriles Radonski, the opposition leader who will take on Chavez in October’s presidential election.

Cabello, a former army officer, lost the governorship of Miranda, Venezuela’s second most populous state, to Capriles in 2008 in a major upset for Chavez.

There is Vice President Elias Jaua, who is constitutionally charged with filling in for Chavez. Jaua has said there is no need for anyone to step up to the plate, as the president is with the “full faculties to be in charge of the government.” He is often seen at Chavez’s side, as is Foreign Minister Nicolas Maduro. The two represent the civilian wing of the government while Cabello is closer to the military.

If the PSUV is really keen to emulate Cuba’s Fidel and Raul Castro, the job could go to Chavez’s elder brother Adan, whom Hugo jokingly once referred to as the “Marxist in the family.”

However, many analysts say that it doesn’t matter who takes over. “There is no Chavismo without Chavez,” said Boris Nomura of investment bank Nomura in New York. “If Chavez doesn't run, or if Chavez is running in a diminished state and he cannot campaign 24/7, he's going to have a tough time getting re-elected.”

Venezuela political analyst Carlos Romero, based at the Central University of Venezuela, was critical of the speculation: “It does not matter at all!” he said. “The general situation will be worse without Chavez and the factions would fight among each other. All of them would be in power only for a short period of time.”

Chavez claims his treatment this week was a success, proclaiming on Twitter that he was “soaring like the condor.” Authorities in Venezuela have also asked people to ignore the rumors.

That is difficult given the extremely limited information available. Unlike his counterparts in Brazil, Argentina and a number of other Latin American nations who also have suffered from cancer recently, Chavez has failed to reveal any details of what type of cancer he is suffering, which has led to the speculation.

“There’s very little information to work out the histology of the tumor,” said Sunil Daryanani, an oncologist at the Hospital de Clinicas Caracas. “That makes it very difficult to give any prognosis. … We don’t even know what drugs he was given in the way of chemotherapy.”

“I see cancer patients every single day,” Daryanani added. “I’m used to seeing patients deal with these sort of blows and they’re normally very humble and unfortunately I think Chavez is trying to draw a political advantage from all of this.”

When Chavez returned after his treatment last October, he said: “It would be easier for a donkey to pass through the eye of a needle than for the opposition to win the elections.”

Expect more biblical rhetoric over the coming months as Chavez musters all the political advantage he can in order to win October’s presidential election.