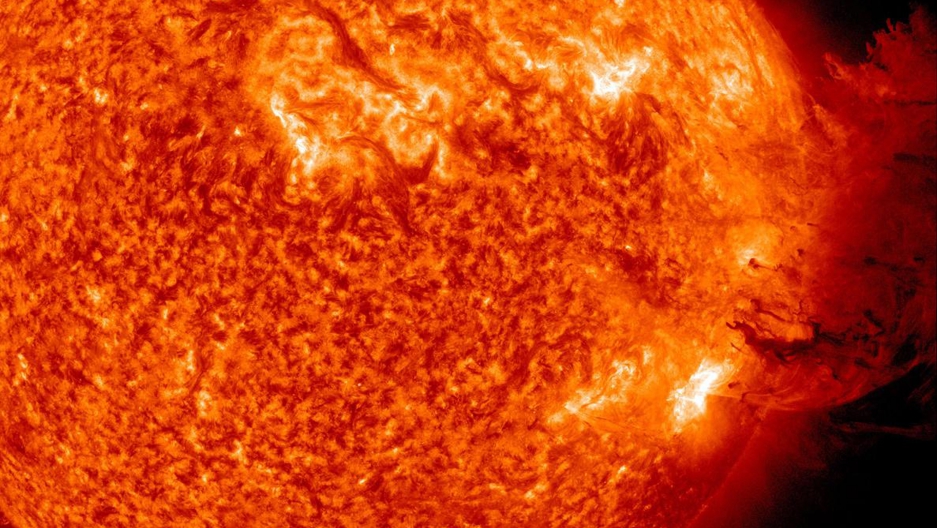 IN SPACE - JUNE 7: In this handout from NASA/Solar Dynamics Observatory, a solar large flare erupts off the sun June 7, 2011 in space. A large cloud of particles flew up and then was pulled back down to the sun's surface.
Credit: Handout
Share

Better get all your texting, emailing, Facebooking and Tweeting in now, because if the sun has its way, within the next decade technology may be obsolete.

According to the International Journal of Research and Applications, there is a one in eight chance the earth will experience a massive solar storm within the next decade.

Pete Riley, a senior space scientist at Predictive Science in San Diego, California, published the one in eight estimate in Space Weather. Even he was surprised at the likelihood of the event, he told Wired Magazine. “Even if it’s off by a factor of two, that’s a much larger number than I thought," he said.

The sun goes through a cycle every 11 years, with waves of increased and decreased activity. In a photo essay by GlobalPost in January, we explained, "Solar flares are sometimes associated with events called coronal mass ejections (CMEs), explosions in which billions of charged particles are blasted into space at high speed."

The last major solar flare event took place 150 years ago on September 1, 1859, and is known as the Carrington Event. The New York Times described the event as, "The Brilliant Display on Sunday Night, The present generation have listened with wonder and admiration to the stories their fathers and mothers have told them of auroras and meteors. They have opened their ears and mouths and eyes as they heard of stars falling from the heavens like rain, of the sky at night becoming read as with blood, and in the day time of its being so darkened that stars were visible. Few have had the opportunities of witnessing these sublime displays; but on Sunday night the heavens were arrayed in a drapery more gorgeous than they have been for years…Such was the aurora, as thousands witnessed it from housetops and from pavements. Many imagined they heard rushing sounds as if Aeolus had let loose winds."

While the sight may have been beautiful, it destroyed communication at the time, with reports of telegraph wires bursting into flames.

Now imagine this happening in 2012.

Earth Island Journal cites a National Academy of Sciences report which estimates a “century-class” solar storm could cause 20 times the damage as Hurricane Katrina while “full recovery could take four to ten years.”

More from GlobalPost: PHOTOS: WHAT IS A SOLAR FLARE AND HOW WILL IT AFFECT EARTH?

A 2008 National Research Council report said, “A longer-term outage would likely include, for example, disruption of the transportation, communication, banking, and finance systems, and government services; the breakdown of the distribution of potable water owing to pump failure; and the loss of perishable foods and medications because of lack of refrigeration."

However, the Earth Island article notes a much scarier reality than losing access to the Internet. "A 2011 Oak Ridge National Laboratory report warned of a 33 percent likelihood that a solar flare could lead to 'long-term power loss' over a nuclear reactor’s life. With 440 nuclear power plants in 30 countries, and 250 research reactors, there are nearly 700 potential Fukushimas waiting to be unleashed."

NASA has proposed a "Solar Shield" project that would protect the United States power grid, which would include reinforcing power stations and stockpiling replacement parts at a cost of around $1 billion dollars. The US House of Representatives passed the bill necessary to move forward with the proposed project, however Senate has failed to act on Solar Shield Bill H.R.668.