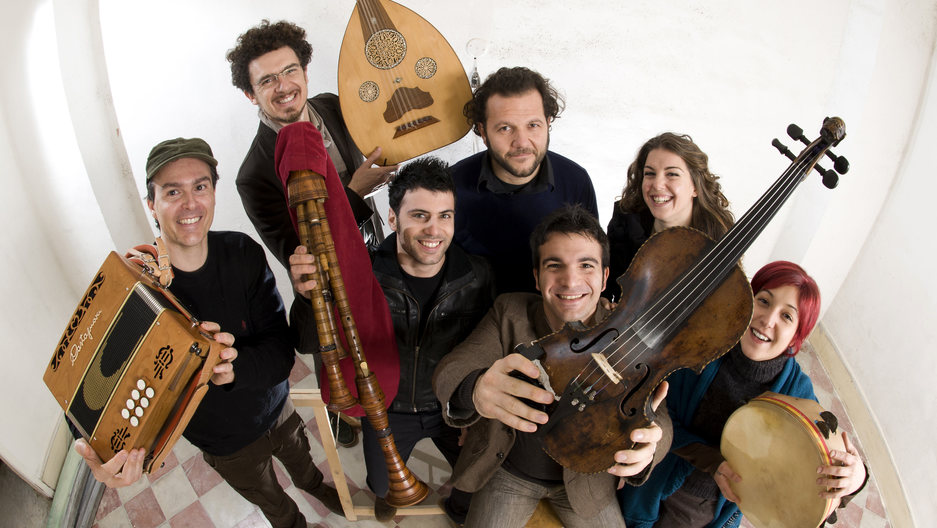 Share
The 37-year-old Italian band Canzoniere Grecanico Salentino trades in movement: never-ending, trance-inducing movement. The current leader, Mauro Durante, plays a large version of tambourine called the tamburello (it's an animal skin stretched across a round wooden frame, with small, rough cymbals arranged on the edge.) When I interviewed him for this piece, Durante was playing the distinctive, rolling rhythms of the pizzica pizzica on whatever surface his hand happened to be near. His wrist flew across a drum, a credit card, the wall of an elevator, and a hotel keycard. It must be a drummer thing. Durante explained that Canzoniere means 'song book'. Grecanico is the name of the old regional dialect you hear in some of the band's songs. And Salento is the region in question, the heel of the boot of Italy. It is a Finis Terra, the end of the land. You have to want to go to Salento, you don't step by. But at the same time we are across the Mediterranean sea and we have been a crossroads for Greece, for Africa, for Arabs, [and] for Spanish domination. So both situations are interesting in our culture: [we are] isolated but still we've got many influences. Later in the piece Mauro Durante talks about the mythical properties of dancing the pizzica pizzica: curing the hysteria that results from a spider's bite.