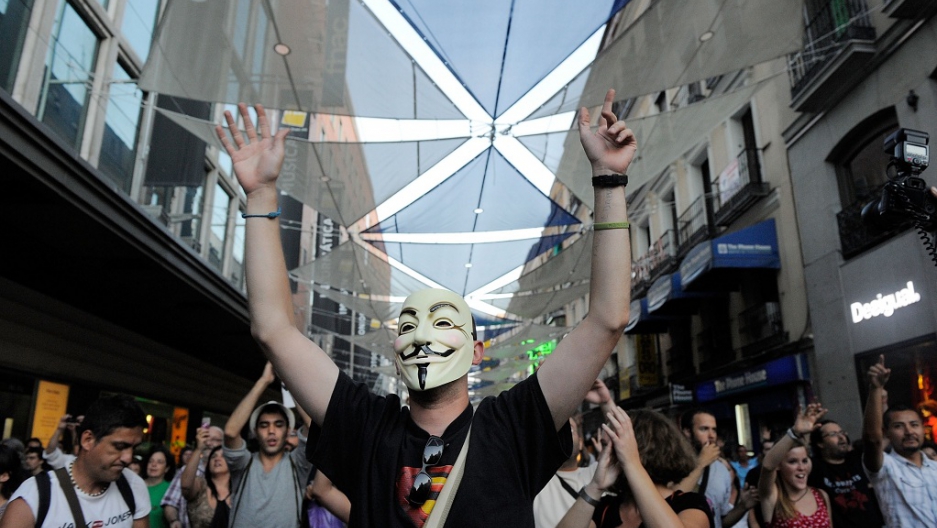 A protester, wearing an anonymous mask, protests after being prevented by police from gathering in Puerta del Sol square on August 2, 2011 in Madrid, Spain. The indignants have come from across the country to protest high levels of unemployment, the austerity measures and what they consider a stagnant and corrupt political system.
Credit: Denis Doyle
Share

ATLANTA — In a coordinated international effort by Interpol, the global security agency arrested 25 people accused of belonging to the hacker collective Anonymous in four countries in Latin America and Europe Tuesday night.

In what was dubbed “Operation Unmask,” perhaps a reference to the Guy Faukes mask that has become a symbol of Anonymous, Interpol agents detained Anonymous members in Argentina, Chile, Colombia and Spain, suspected of launching cyber attacks on the Colombian Ministry of Defense, its presidential website, and Chile’s Endesa electricity company.

Anonymous swiftly responded with a "distributed denial of service" attack on Interpol’s website and a call to arms posted to the Twitter account AnonOps, an account closely linked with the leaderless collective. The rallying call also appeared on other parts of the internet that support the group, like 4chan and various internet chat relays. Access to INTERPOL.int was interrupted early Wednesday, but returned to normal operation a few hours later.

Along with the arrests, Interpol seized 250 items of IT equipment and mobile phones from 40 locations in 15 cities. Authorities also seized payment cards and cash as part of an investigation into how Anonymous is funded, according to Interpol.

“This operation shows that crime in the virtual world does have real consequences for those involved, and that the Internet cannot be seen as a safe haven for criminal activity, no matter where it originates or where it is targeted,” said Bernd Rossbach, the acting Interpol executive director of police services.

The arrests came just two days into Anonymous's controversial collaboration with the secret-sharing website Wikileaks to publish what Wikileaks called the “Global Intelligence Files,” said to be a collection of more than 5 million emails hacked from servers belonging to Stratfor, a US-based global intelligence firm. Interpol has yet to comment as to whether or not the individuals that were arrested had been connected with the Stratfor hack.