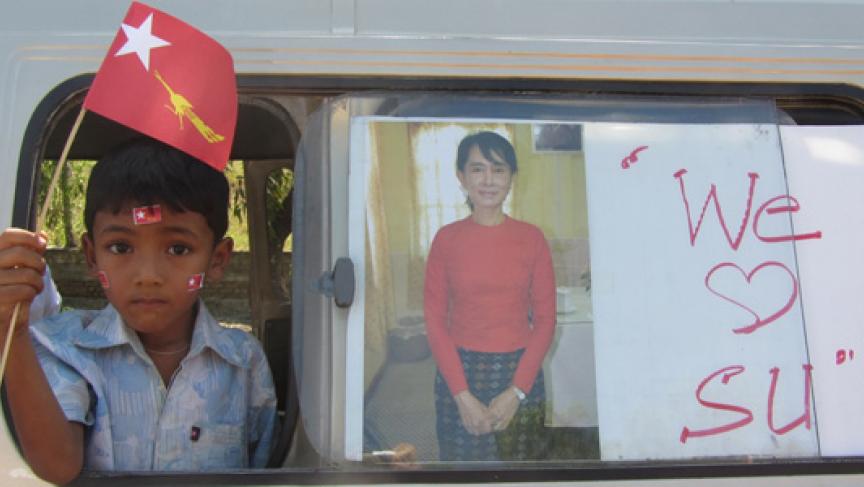 The mood among the throng of Aung San Suu Kyi supporters on the side of the road, hoping to catch a glimpse of her on the way to her rally, is nothing short of exuberant.

“Mother Suu! Mother Suu!” they shout. They wave miniature flags of the National League for Democracy (NLD) – Aung San Suu Kyi’s party. They wear flag stickers on their face, and her picture on their T-shirts, T-shirts that are now openly displayed for sale around town, where for years it was risky even to say her name.

It’s campaign season in Myanmar, also known as Burma. Parliamentary elections are scheduled for April, and Nobel laureate Aung San Suu Kyi is by far the most celebrated candidate.

One of the supporters who turned out to see her is a fruit vendor named Khin Pyone Win, who said if Aung San Suu Kyi is elected to parliament, life will get better, because “everyone loves her.”

Farther down the street, 17-year-old May Thu Aung waited with a bouquet of flowers to hand to Aung San Suu Kyi when her vehicle drives by. May said she admires Aung San Suu Kyi’s bravery, and commitment. She sees her as a role model, and hopes to be a politician like her someday.

The crowd erupts as Aung San Suu Kyi’s vehicle comes into view. May barely manages to get to the window and hand her role model the bouquet, before a crowd presses in, running alongside the vehicle, trying to touch it if they can.

Others join the convoy – cars, jeeps, motorcycles, bicycles, buses – with people jammed in hanging out the doors, waving big red NLD flags. The convoy crawls for much of its 35-mile route, but no one seems to care. They sing and chant, and wave at the villagers who line much of the route. There is no visible military presence along the way, and no interference.

“For 23 years, under military rule, we had to shut our mouths, shut our ears, shut our eyes. Now this!” said one driver. He grins and pumps his fists in the air.

All this raises the question of why Myanmar’s military, after almost 50 years of authoritarian rule, is suddenly willing to move in such a different direction. One reason could be a desire to get long-standing U.S. economic sanctions lifted, so Myanmar’s economy can take off. Another could be to stop relying so heavily on China. There are other factors as well.

“I think there was a lot of thinking last year about lessons to be learned from the Arab Spring,” said Thant Myint-U, the grandson of former UN Secretary General U Thant. “I think one lesson people in the leadership took from that is that while on the one hand reform needed to move ahead, that they couldn’t simply wait until there were uprisings or new demonstrations.”

Thant Myint-U has been working as a liaison between Burmese civil society and the government, encouraging exactly the kind of change that is now happening. He said the pace has picked up since President Thein Sein met Aung San Suu Kyi in August, but the winds of change started blowing well before that.

“If you went back two or three years, you would have seen some of the building blocks of some of the changes that have taken place,” Thant said. “Civil society institutions have been growing, the media were just a little bit freer, people were coming in and out a little bit more. There was talk of economic reforms.”

Political prisoners have been released, though the NLD says some 280 remain in prison. Burmese media started to push the boundaries, with little pushing back, and the National League for Democracy suddenly found it could operate openly, without as much harassment.

The NLD’s office buzzes with supporters crowding in to buy Aung San Suu Kyi key chains, posters and stickers. Party organizers cluster around tables and talk strategy with candidates. One of the youngest is 31-year-old Zayar Thaw, who’s running for a seat in Naypadaw, the remote capital city built by the Burmese military. He said he likes a challenge, but he remains skeptical of the recent changes.

“I’m not optimistic, and I’m not pessimistic,” Zayar Thaw said. “But we need to encourage the government for no turning back.”

“Maybe or maybe not," he said.

Zayar Thaw came by his skepticism the hard way. He spent more than three years in prison after joining the 2007 pro-democracy demonstrations.

“We lived in the military junta so many years, so we lived with the fear,” he said. “But right now, we have a little bit of rights, and the government listens to our voice, a little.”

That isn’t enough, yet, he said, and there are signs old habits die hard.

At least one political prisoner released in January, a Buddhist monk named U Gambira, has since been detained, released, and threatened with criminal prosecution for continuing to criticize the government.

Still, another NLD candidate for parliament, 62-year-old Maw Aung, is more optimistic. He used to work in the government, and said in his lifetime, he’s never seen positive change on the scale of what’s happening now.

“At first, it was hard for me to believe it,” Maw said. “But now, their actions have convinced me, they’re well on the track for transition.”

Maw Aung said that doesn’t mean he doesn’t have his own concerns.

“To decide to run in the election and cooperate with government policy is taking a risk,” Maw said. “Anything could happen in Burma politics.”

He added that if the NLD is running for seats under a constitution written by the military and in a system still run by former generals, it could get co-opted — especially since it stands to gain no more than 48 out of more than 600 seats in this by-election.

Her many supporters pray that it does.

She certainly showed no sign of flagging at Sunday’s rally. With thousands crowded onto a sports ground in the dusty town of Thon Gwa, she bantered and joked, and the crowd ate it up.

But she also had a serious message, about her country’s need, not just for democracy, but to rebuild its battered education system, to reenergize Myanmar into what it once was, before military rule — a regional knowledge and education center.

“Of course, education is important, and getting Aung San Suu Kyi elected is important. But even then, people can’t just expect she’s going to solve all their problems. You have to work hard and help yourself,” Bo Zaw said.

Suu Kyi would no doubt agree. She ended her speech, waved at her supporters, and descended the stairs from the stage to a manic crowd pushing to get closer to her.

Once safely in her vehicle, she stood up through the sunroof, and waved, as dusk descended and a crescent moon came out.

The college student, Bo Zaw, watched her go. He said he was thrilled to see her in person, but for now, what she says, what the government says, it’s all still talk. Sure, it feels freer now, but it’s hard to know where that’s going.

He’s waiting to see what happens after the election. Maybe then, he said, there’ll be change he can believe in.