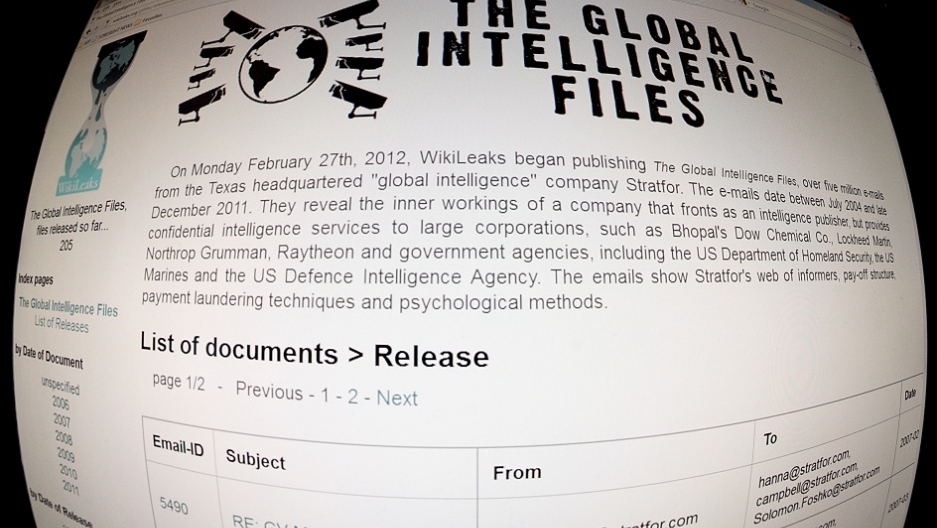 This February 27, 2012 photo shows a screen from the Internet site Wikileaks. Wikileaks, which triggered an earthquake in 2010 in world diplomacy, said Monday it has begun the publication of more than five million emails to the American private intelligence and Stratfor strategic Analysis. Electronic messages, which spread from July 2004 to December 2011, reveal employment by Stratfor 'networks of informants, payment structures of bribes, wine, money laundering techniques and methods of psychological 'said a statement from Wikileaks. 'The documents show how a private company working in information and how it targets individuals for their private and government customers,' the statement added.
Credit: Karen Bleier
Share

According to Wikileaks, the first of five million emails it's releasing from servers belonging to global intelligence firm Stratfor suggest that the company was used by private corporations to monitor activist groups in the US and Canada.

The authenticity of the emails — reportedly obtained by Anonymous hackers and released early Monday morning — could not be independently verified.

They appear to show that Stratfor was contracted by Coca-Cola, Dow Chemical, and Union Carbide to monitor anti-corporate activists, The Yes Men and PETA.

The Yes Men were working to raise awareness concerning the Bhopal chemical disaster in India that took place in December of 1984, considered to be one of the world’s worst industrial catastrophes where thousands were killed in a toxic gas leak.

Dow and Union Carbide sought to determine whether or not the 25th anniversary of the disaster would foment further anti-corporate sentiment  towards their companies. The emails detail personal information about Yes Men activists, public appearances, media releases made by the group, and general coverage of the group’s activities in news outlets.

"With less than a month to go [until the 25th anniversary], you'd think that the major players—especially Amnesty—would have branched out from Bhopal to make a broader set of issues. I don't see any evidence of it," according to an email allegedly sent by Bart Mongoven, Stratfor's Vice President, in November 2004. "If they can't manage to use the 25th anniversary to broaden the issue, they probably won't be able to."

The Yes Men were quick to respond to the emails, citing them as evidence of the success of their movement and other movements like Occupy Wall Street.

"Just as Wall Street has at times let slip their fear of the Occupy Wall Street movement, these leaks seem to show that corporate power is most afraid of whatever reveals "the larger whole" and "broader issues," i.e. whatever brings systemic criminal behavior to light," read their statement.

The emails also appear to show that Stratfor was hired by Coca-Cola to monitor PETA activists in Canada, citing fears that activists may take action against sponsors and events surrounding the 2010 Vancouver Winter Olympics.

“To put some context onto this request, our client is looking forward toward the 2010 Olympics in Vancouver and is somewhat concerned that PETA affiliates might be interested in carry out direct action against Olympic sponsors and events during that time frame,” reads an email released by Wikileaks, dated June of 2009.

Emails alleged sent between Stratfor and Coca-Cola employees appear to show that Coke wanted Strafor to ascertain details of PETA's Canadian activities, including how many supporters are there in Canada, how many of these are inclined toward activism, to what extent US-based PETA supporters would travel to Canada to support activism, to what extent could non-PETA hangers-on (such as anarchists or ALF supporters) get involved in any protest activity, and details of PETA's cross-border governance and methodology for planning and executing activism.