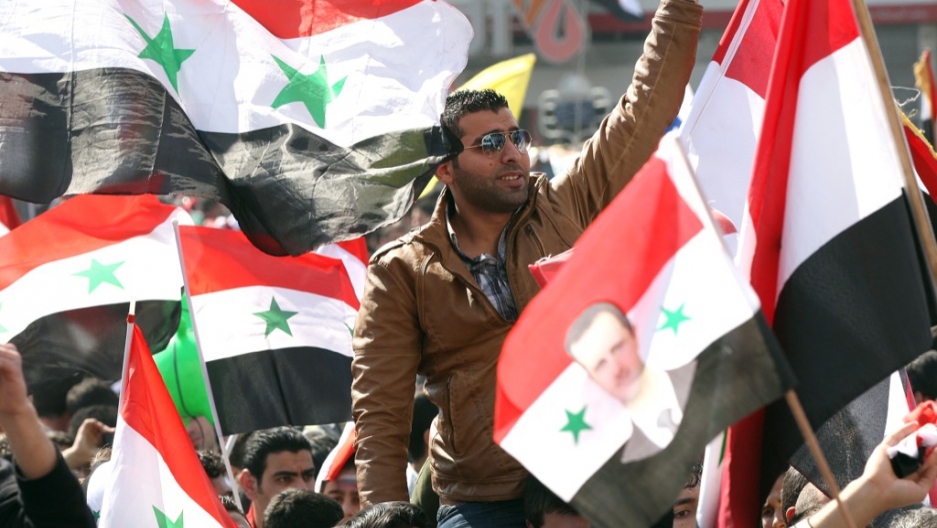 Syrian flags are waved as people take to the streets after voting on a new constitution that could end five decades of single-party domination, in the capital Damascus, on February 26, 2012, although the opposition has called a boycott as the regime's bloody crackdown shows no sign of easing.
Credit: LOUAI BESHARA
Share

BEIRUT, Lebanon — Haidar and Omar don’t have much in common these days in Syria.

Haidar is an Allawite, an offshoot of Shiite Islam, a minority sect but the one from which 42 years of Assad family dictatorship has drawn the majority of its leaders.

Haidar’s family is from the mountains around Jabla, a Syrian port city in the heartland of the Allawite community. The Allawites' status rose exponentially after Hafez al-Assad, the president’s father, took power in a coup in 1970, and re-wrote Syria’s constitution to enshrine the right of his ruling Baath Party to win every election since.

Omar is a Sunni Muslim, like three quarters of Syria’s population, and is a key organizer of protests in the Damascus suburb of Qaboun that aim to bring down the Assad police state and restore power in Syria to the majority.

Although the two men are at opposite ends of the political spectrum, both Haidar and Omar agree on one thing: the referendum held Sunday on a new constitution was a sham.

One of the many flaws: people were allowed to vote multiple times — one of many flaws in the key plank of President Bashar al-Assad’s promised reforms.

“The opposition may have called for a boycott of the vote. But after this I will go to another election center and vote again,” boasted Haidar, casting the first of apparently many ballots. He believed the vote wasn't so much about changing the constitution as it was showing support for his embattled president. “I know voting many times is illegal, but how will they know if there are no lists of registered voters in Syria?”

On that point Omar agreed. It was one of many reasons why he and most others in Qaboun boycotted the vote.

“There are no election lists,” Omar said. “I could vote in 15 centers around Damascus and no one would discover it. There is no election card. You just vote with your ID or student card.”

What lists the authorities do keep included a 137-year-old woman and hundreds of Syrian Jews who fled the country decades ago, according to reports received by Western diplomats in Damascus. No international observers were on hand to monitor the vote.

There were no pots of purple ink to stain voters’ fingers, either, according to diplomats, who estimated turnout at about 5 percent. Early reports on state media said Syria’s Interior Ministry announced that 57 percent of eligible voters had cast ballots, and 89 percent of those were in favor of the new constitution.

A reporter in Damascus and its suburbs said election centers were set up in schools, state-run health centers, government ministries and Baath Party buildings, and were generally watched over by five or 10 secret police.

At one polling station in a state-run clinic in Damascus’ Midan district, a neighborhood of traditional Sunni Damascene families and a center for protests in the capital, the transparent ballot box was still almost empty by late afternoon.

At others, the box was at least opaque and, for the first time in Syria, private voting booths were available, though many of those who did vote did so openly at the desk.

Of the roughly 40 ballots cast in Midan’s polling center, said one of the government employees running it, most had come from employees of the health facility itself.

“All public workers must vote, otherwise they could be penalized by the secret service,” said Muhammad Faour of the Carnegie Middle East Centre in Beirut, describing the result of the referendum as a “foregone conclusion.”

Two buses filled with Kalashnikov-wielding security men stood watch over Midan’s Al Hassan Mosque, a focus for anti-regime protests. No one in Midan could tell a reporter where the poll was being held.

In Homs and Hama, two of Syria’s largest cities, in the far east of Deir Ezzour, in the northwest province of Idleb and in the far south of Daraa, no election took place. Residents cowered, hungry and cold, as mortars and rockets pounded their homes.

Avaaz, the rights group, reported some 2,000 Syrians attempted to flee Homs’ suburbs as the bombardment, now in its fourth week, escalated. Around 100 people were killed over the weekend by Assad’s forces.

Despite the onslaught, residents of Idlib found time to film a satirical video showing a donkey with a voting paper stuffed in its back, being led to a makeshift ballot box. “This is Syrian democracy,” announced one of the video’s creators.

Syria’s state-run media SANA showed a bustling polling center where Assad cast his vote. He was accompanied by his wife Asma, quashing rumors that the woman Vogue once branded "the desert rose" for her progressive stances, had fled Damascus for a family home in London, appalled at the killing of what Syrian rights groups say is more than 8,000 people by her husband’s regime since March.

Alastair Crooke, former EU mediator on the Middle East, was quoted as applauding a vote which “shows clearly that the majority of the Syrians want to reach reform under the current leadership.”

Though the new constitution removes Article 8, enshrining the Baath Party’s right to lead state and society, analysts from diverse sides of the spectrum agreed the new text did nothing to limit the president’s absolute powers.

Any new political party would have to be approved by the president, and cannot include those based on religion or ethnicity, said Faour, meaning the Muslim Brotherhood, which is a key player in the opposition Syrian National Council and in major protest centers like Homs and Hama, would be proscribed from ever taking power. Kurds, too, who make up around eight percent of the population, would see many of their parties continue to be banned from elections.

The new constitution keeps the president’s tenure at seven years, and maintains the president’s immunity from prosecution, as well as his status as head of the judiciary, parliament and military.

Sami Moubayed, a Syrian political analyst who was once supportive of Assad’s reformist credentials, wrote recently that the new constitution had come as “too little, too late,” noting the text had been drafted by a committee appointed by Assad, rather than elected by parliament.

For Omar, the protest leader from Qaboun, the new constitution “takes power away from the Baath Party and to the president and his family.”

With presidential elections scheduled for 2014 and with no back dating, the new constitution would likely keep Assad in power until 2028, a fact not lost on Haidar.

“We are voting to keep president Bashar for another two years, and then he will be elected for another 14 years. After 16 years, everything will be changed and no one will be able to say no to us.”

The new constitution also may have further alientated Syria's small Christian population, because it preserved Article 3, which specified Islam as the religion of the head of state. This would mean that no Syrian Christian will legally be allowed to run for the presidency, a bitter blow to a community which has made a point of not backing the Sunni-led opposition.

“Most of Syria’s Christians were very supportive of President Assad," said Elias, a 35-year-old Christian from Damascus’ Bab Touma neighborhood. "We were afraid that if the Sunnis took power they would squeeze our rights. Today we discovered Assad ranks Christians as second-class citizens."

“We Christians have lived on these lands for thousands of years,” said Elias. “We do all the same duties as Muslim citizens but now we don’t have the same rights. This was a big stab in the back by Assad.”

A GlobalPost journalist in Damascus contributed reporting for this story. His identity has been kept secret for security reasons.