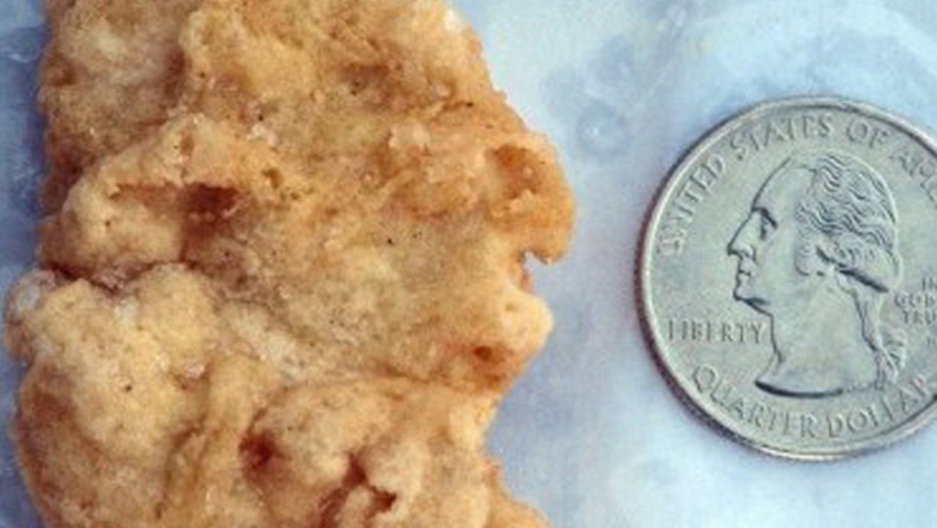 A Nebraska woman is selling a 3-year-old chicken nugget on eBay that she says looks like George Washington. Bids are up to $4,000 so far.
Credit: eBay
Share

A Nebraska woman is auctioning off a McDonald's chicken nugget which she claims is fried in the shape of George Washington, the Huffington Post reported.

Rebekah Speight, of Dakota City, Neb., claims she found the patriotic chicken bit three years ago while treating her children to "99-cent McNugget Tuesday" at a local McDonald's, according to the eBay listing.

Speight said she almost trashed the presidential poultry before noticing a likeness to the country's most distinguished forefather.

"I looked down at the McNugget and just started laughing," Speight told the Sioux City Journal. "I saw this portrait of George Washington staring back at me."

The nugget sat in Speight's freezer for three years, only emerging for show-and-tell with house guests, until it was recently "called to a higher purpose," Speight wrote in the eBay listing.

After hearing a sermon, Speight told the Sioux City Journal she decided to sell the nugget as a way to raise money for children at the Sioux City Family Worship Center to go to summer camp. The church needs $15,000 to send 50 kids to the camp.

As of Monday morning, more than 50 bids had been placed. The current highest bid is $4,000.