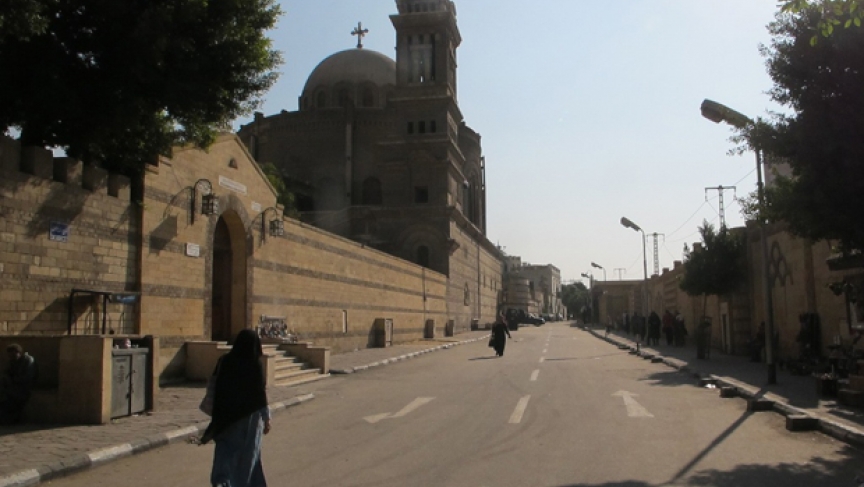 At Coptic churches in Egypt, Christians worry that their rights will be curtailed under new proposals by Islamist political parties. (Photo by Ben Gilbert.)

George Gerges, a 24-year-old Coptic Christian, said the situation in Egypt over the past year hasn't been good.

This winter, The Muslim Brotherhood and ultraconservative Salafi parties won almost 75 percent of the seats in Egypt’s parliamentary elections.

Last October, more than 20 Christians were killed during a demonstration demanding equal rights. And not too long ago, several Christian churches were burned during clashes between Christians and Muslims.

“When we live together, without any political factors, we live in peace,” Gerges said. “But when religion becomes an issue, they burn churches, they burn houses, they kill Christians. There’s a bad history.”

He works at a gift shop in the oldest part of the city, called Coptic Cairo. The community, with its seven churches, has been here since Roman times. Copts trace their faith back to the days of Jesus, when their patron saint, St. Mark, proselytized here.

Coptic Cairo is blocked off from the rest of the city by a big steel gate, and by Egyptian police with automatic weapons. It’s nothing new. It’s been like this for years. But before, Islamist groups didn’t dominate the country’s parliament. Gerges said people voted for them because they were afraid that Egypt was losing its “Muslim Identity.”

Gerges said Copts were here long before the Muslim conquests of the 7th century.

But since then it hasn’t been easy. Under former president Hosni Mubarak and to this day, Coptic Christians have a much harder time building churches than Muslims do Mosques. The state also makes it very easy for a Christian to convert to Islam, but nearly impossible for Muslims to convert to Christianity.

“Islamic law and local law would prevent my daughter from marrying Christian," Soudan said. "Nobody can make this kind of marriage certificate; even a judge. It’s forbidden. The religious law forbid, and local law forbid.”

These types of statements do not give comfort to Christians who had hoped Egypt’s revolution would mean a chance for equal rights for all citizens. It’s even more disturbing for those Christians who just want security.

At St. Mark’s Cathedral, the seat of the Coptic pope in Cairo, worshippers attend a noon mass. Rumors have spread in the past few months that thousands of Christians are fleeing Egypt. But there’s no evidence, beyond anecdotal, to back up the rumors. Many Christians say there’s no reason to leave, at least not yet.

“We are worried, but not freaked out. There’s a difference,” said Christine Atef Habib, a medical student in Cairo.

Habib and fellow student Carolos Maher Fayez supported the revolution, and say the Islamic parties can’t make the country any worse than it already was under Mubarak. They say they want equal rights with Muslims, and both Christine and Carlos have faith in their fellow Egyptians.

“There are a lot of Muslim Egyptians, liberals, and they are our friends. I was in school with 250 Muslims, we were only six Christians, we were living there, sleeping there, eating together, playing together. Till today we are best friends,” Fayez said.

“We live a normal life. They are my colleagues and friends. We are not killing each other each time we see each other,” Habib said. “The situation isn’t that dark. Even among Christians you will find some people in the extremes. But most people are in between.”

But Adel Iskander Abdullah, who owns the shop where Gerges works, disagrees. He wonders now, with the army in control and the Islamists having won parliament, where the Christians fit into the “new” Egypt.

“How can I love the Muslims?” he asked. “I heard them talking about justice, and talking about following the Islamic law. But I don’t see any justice. Do they not have justice, or is there no justice in Islamic law? Where is the Christian role? The name they are calling themselves is wrong: the Freedom and Justice Party. Under them there’s no freedom and no justice.”

A few blocks away, merchants opened their shops at an outdoor mall. It’s a mixed crowd, with Christian- and Muslim-owned stores, although 40 percent of them have closed in the past year because of the lack of tourists. Hamdi Badr works at one shop that sells tin lanterns and other artisanal gifts. The 22-year-old protested in Tahrir Square last winter. Badr said Islam obliges Muslims to protect Christians, and that the Egyptian government should not make any laws further curtailing their rights.

“The government can’t force can’t force us to do anything we don’t want, because the people now have a voice,” she said. “And if they go and make those Christians wear hijab, I will go protest, because their religion doesn’t say they should.”

But even Badr’s pledge can come across as patronizing to Christians who wonder why they should be dependent on individuals coming to their defense.

At a nearby shop, a Christian woman sums it up succinctly.

“We don’t want Christianity or Islam to have anything to do with the law. Keep religion out of politics, and give us all equal rights," she said.