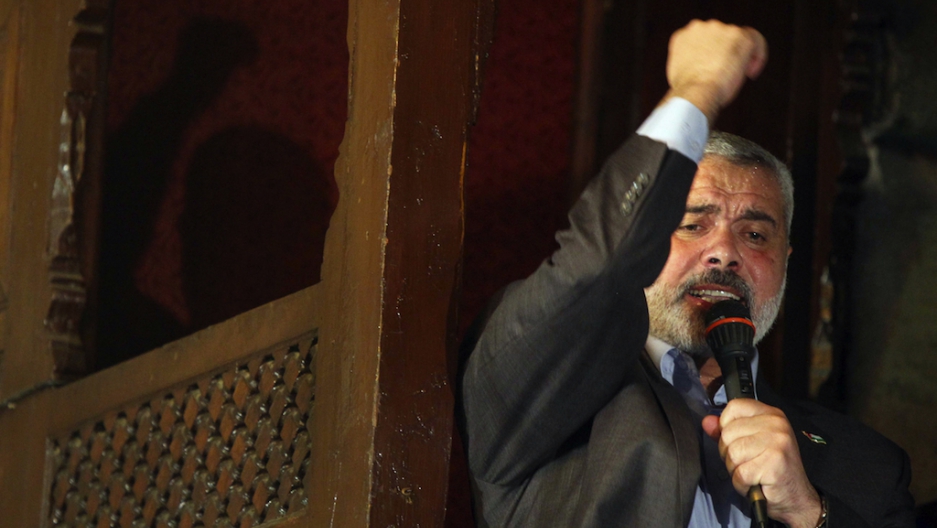 Hamas's Gaza premier Ismail Haniya delivers a speech after Friday prayers in the Al-Azhar grand mosque in Cairo on Feb. 24, 2012 where he hailed the 'heroic' Syrian struggle for democracy.
Share

CAIRO, Egypt -- This weekend marked another extraordinary development in Middle East politics, when the leader of Gaza's Islamist Hamas movement declared his opposition to the increasingly isolated Syrian government, the organization's decades-long host and patron as it faced isolation and exile across the region.

The announcement, which came during Hamas Prime Minister Ismail Haniyeh's sermon at a mosque in Cairo last Friday, solidifes the progressive undoing of a once crucial alliance between the Islamists, Syria and Syria's Iranian-backed regime in the wake of the Arab Spring - and that has profound implications for Palestinians, Egyptians and Israelis alike.

"I salute all the nations of the Arab Spring and I salute the heroic people of Syria who are striving for freedom, democracy and reform," Ismail Haniyeh, visiting Egypt from the Gaza Strip, told thousands of Friday worshippers at Cairo's al-Azhar mosque, according to Reuters.

Syria is now on the brink of civil war after an 11-month uprising prompted a bloody crackdown by the government of President Bashar Al Assad. Thousands have been killed, and Hamas ditched its offices in Damascus amid growing international criticism of the Syrian regime.

"We are marching towards Syria, with millions of martyrs," chanted worshippers at al-Azhar, home to one of the Sunni world's highest seats of learning. "No Hezbollah and no Iran. "The Syrian revolution is an Arab revolution."

The popular revolts that began sweeping the Middle East last year - and which continue in Syria, Egypt, Bahrain and Yemen - have thrown the region into political and diplomatic disarray, disturbing and scrapping partnerships forged for years under stagnant authoritarian rule.

In 2007, Egypt enthusiastically participated in Israel's military blockade of Gaza when Hamas seized power there. Its leaders were subject to travel restrictions through Egypt's Rafah crossing with the Gaza Strip, as Egyptian officials grew wary of a Muslim Brotherhood-linked movement on its borders.

Read more from GlobalPost: Egypt breaks its own Gaza blockade

So the fact that Haniyeh was able to give this speech from one of Egypt's most prominent and influential mosques is remarkable in itself. It suggests the Hamas leader was given guarantees of assistance and perhaps promises of a diplomatic future in Egypt if he turned against his benefactors.

Syria, one of Israel's regional foes, offered refuge away from potential assassination attempts by Israeli security forces. Iran, also an enemy of Israel, provided cash and weapons to the Islamist fighters.

In recent days, following a week-long fuel shortage that shut Gaza's power plant, Haniyeh met with Egyptian officials to clinch a new energy deal that would supply Gaza with more electricity and connect the besieged enclave to the regional power grid.

Egypt maintains shaky relations with Iran, and recently recalled its ambassador to Syria. The Syrian embassy in Cairo is no longer functioning.

It remains unclear whether Hamas will open a new office in Cairo following its flight from Damascus.

Regardless, the changes to the old Middle East order are seismic.