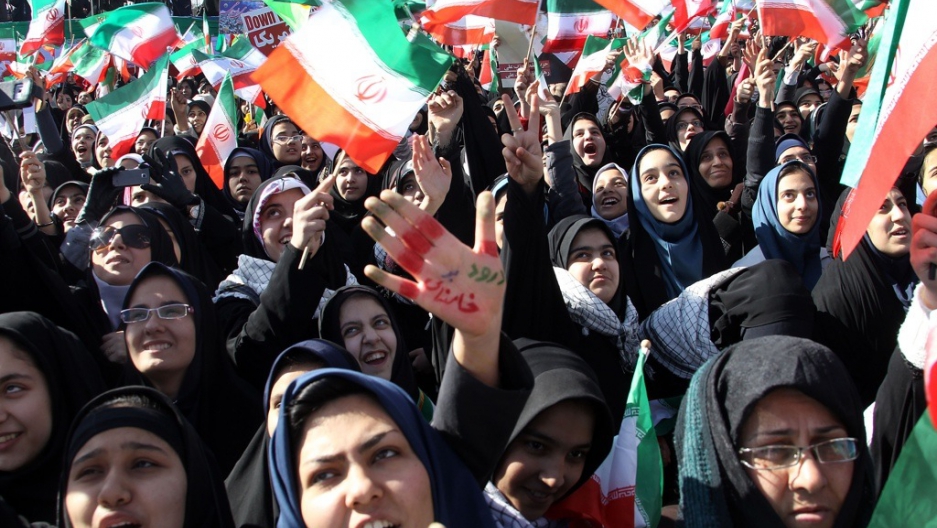 Iranian women wave national flags during a rally to mark the 33rd anniversary of the Islamic revolution in Azadi Square in Tehran on Feb. 11, 2012.
Credit: Atta Kenare
Share

TEHRAN, Iran — As Iran’s isolation grows more pronounced week after week, so does, it seems, a sense of nationalism among its citizens.

Long famous for such tendencies, Iranians are once again asserting their love of what they call "Vatan," or Homeland, as both real and perceived threats from abroad continue to mount.

On the part of the government, the prideful rhetoric is nothing new. The threats of preemptive strikes, oil embargoes and the closing of the Strait of Hormuz, together with bluster about its capture of a downed US spy plane, all appear to be posturing as the conflict with the West over its nuclear program continues to seethe.

More quietly, however, everyday Iranians too are beginning to feel the pull of national pride. Crippled in their daily lives by skyrocketing energy costs and the weight of economic sanctions, many of Iran's citizens appear to be seeking refuge in their own history, steeped as it is in power and prestige.

“For years I wanted to leave Iran, but now I just want to stay," said Nazanin, a 27-year-old graduate student who asked that his last name not be used because, like many in Iran, he fears potential retribution from his government.

While some in Iran are attempting to get out of the country while they still can, others, like Nazanin, are embracing their complicated country in new ways.

At a sprawling exhibition complex in Tehran, delegates from more than 70 countries took part in a conference on "Youth and Islamic Awakening" earlier this month. Many of them were there to discuss what the rest of the world refers to as the Arab Spring, the series of upheavals that was sparked in Tunisia by a street vendor who set himself on fire.

But to the Iranians present, and leaders as well, it is they who deserve the credit for the democracy movements that have raged through the region.

Even as daily life in Tehran trudges along in the face of incessant talk of war, many said they a growing desire to sacrifice for the defense of their country, even if that means pursuing a career in what has become perhaps the country’s most dangerous field — nuclear physics.

After the apparent assassination in January of Mostafa Ahmadi Roshan, an Iranian nuclear scientist and a professor at Tehran’s highly-regarded Sharif University, more than 100 students signed a petition requesting to change their majors to fields related to nuclear studies.

Although some cast the move aside as nothing more than propaganda, it was nonetheless a sign that younger Iranians — with bright futures — are still willing to go to bat for their country.

Sharif University has long been a major source of pride for Iran and many alumni and faculty have both studied and taught at top US universities. Iranian nationalism was further stirred earlier this month when Seyed Mojtaba Atarodi, a professor at Sharif, was detained by US authorities in Los Angeles and held on $460,000 bail for violating US sanctions. He was accused of exporting electronic equipment to Iran. The school community and Iran’s foreign ministry have come to the professor’s defense, demanding his release.

Also stirring for Iranians this year has been the success of the film “A Separation,” which won a Golden Globe and is up for two Academy Awards, including best foreign film. While the film deals with domestic issues of a husband and wife in Tehran, Iranians everywhere are gushing over the film’s success, and its prospects of winning an Oscar.

More from GlobalPost: Is Iran exacting revenge on Israel?

“I’m so happy about the film’s success even though I didn’t see it,” said Lida, a Tehran office worker, adding, “It’s just something for Iranians to be proud of right now.”

During the Golden Globes the director of the film, Asghar Farhadi, dedicated the award to Iranians, who he called a “truly peace-loving people.”

For many Iranians this simmering pride has little to do with their government, which they don't necessarily support. They say there is a big difference between supporting Iran as a country and supporting their country's leadership.

"First of all, I won’t give [Iran] to foreign invaders, but I certainly will not let this regime force me to leave, either. This is my country,” added Nazanin, who was recently arrested by Tehran’s morality police for wearing a jacked deemed to short.

And then there are those who have simply not been moved to support their country at all, and acknowledging both a deteriorating security situation and a sputtering economy, are plotting a course to leave. Many, in fact, said they see the current state of affairs as a testament to how far Iran has fallen.

At Iran’s National Museum, a subtle monument to one of the world’s oldest civilizations, artifacts are on display dating back to 7000 BC. The museum has long been an inspirational landmark for people here. But these days, some worry that the grandeur it houses is symbolic of only a time that is now long gone.

“When I look at these things, I really feel sad that we’ve become so disconnected from our glorious past,” said Javad, who works as a tour guide at the museum.

Sensing the gathering clouds, some Iranians are choosing instead to get out before things get too bad. Hamshari newspaper, one of Iran’s most widely circulated dailies, reported recently that between 50,000 to 80,000 educated elites have left Iran in the last year.

These Iranians are looking for an escape from a standard of living that has decreased dramatically in recent months, and which seems destined to deteriorate further as international sanctions continue to expand.

“There’s nowhere in the world better than Iran for making money,” said Kazem, a currency trader, wistfully. “But right now is just not the time. Too much uncertainty.”

Some are simply hoping to hedge their bets and achieve residence status in another country until the current difficulties pass. Others are resorting to escape plans that include applying for tourist visas to countries in Europe’s Schengen zone, and then seeking asylum at US embassies.

Many more are looking for legal immigration to other countries that are still open to receiving Iranians, like Malaysia and Turkey. The United Arab Emirates, for example, has made it nearly impossible for Iranians to receive work visas, although it welcomes thousands of Iranians each month as tourists.

“I love my country and I want to live here,” said Niloofar, a teacher. “But I would like to have resident status in another country for peace of mind.”