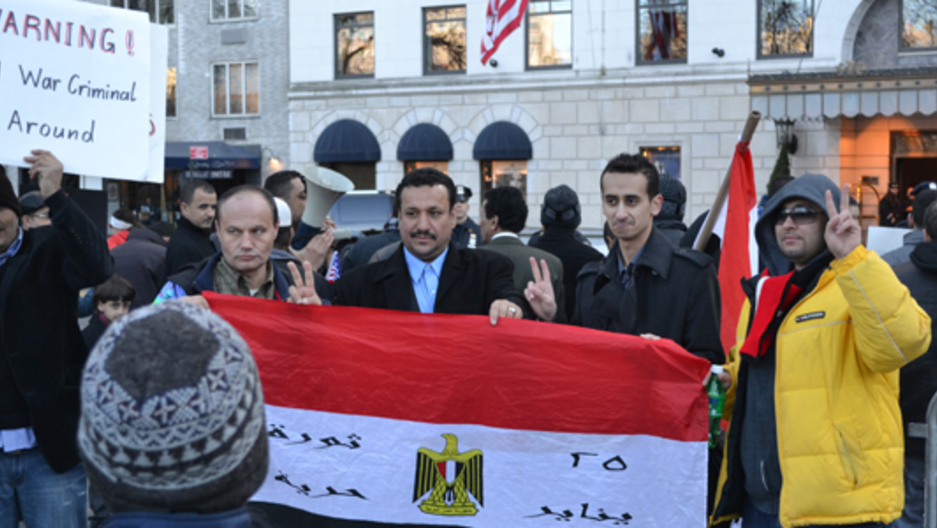 Share
Yemen's outgoing president reportedly left the United States late on Wednesday. Ali Abdullah Saleh was in New York to get treatment for injuries he suffered during a bombing in Yemen last year. Saleh was forced to step down after that bombing, and after months of massive protests demanding his removal. The United States allowed Saleh to go to New York for medical care, in an effort to help end the violence in Yemen. But many Yemeni-Americans opposed that move. They staged protests for weeks in front of the Ritz Carlton hotel in New York, where Yemen's Ali Abdullah Saleh was staying while he received treatment. Their message was clear; Saleh, who presided over a crackdown against Arab Spring protesters in Yemen, should be prosecuted at The Hague. Rabyaah Althaibani, who has family members back in Yemen who continue to protest in Change Square in Sana'a, said giving Saleh a refuge here was a bad move. "It gives the wrong message to the region, to the revolutionaries in Yemen, these young men and women who have been in the streets for more than a year," she said, "and the US is granting this murderer immunity, that's crazy. This is the land of the free, home of the brave and here we are hosting dictators." This was not the first time the US has hosted an unpopular head of state whose country was in the midst of an uprising. The Shah of Iran, Mohammed Reza Pahlavi, also stayed in New York for medical treatment. That was in October 1979 during the Iranian Revolution, which sought the Shah's downfall. Protesters in Iran were incensed at the US. A group of Iranian students eventually took over the American Embassy in Tehran and held 54 Americans hostage. Gary Sick, now a professor at Columbia University, was a primary White House aide on Iran during the Iranian Revolution and the hostage crisis. He said that when President Jimmy Carter was trying to decide whether to let the Shah into the US for treatment in the midst of the revolution, many members of his administration pleaded with him to do it. "Jimmy Carter at the end of the session looked around the room and everybody, all his top advisers were saying, let the Shah come in," Sick said, "and Carter said, well, okay I hear what you're saying, so we'll let him come in but what are you going to tell me when they take our people hostage in Tehran?" The situation in Yemen might be even more galling to demonstrators. The US had always been a staunch supporter of Iran's Shah, so allowing him in wasn't terribly shocking. But the Obama administration has supported some Arab Spring demonstrators against their dictatorial leaders. In Egypt, Tunisia, Libya and Syria, the US has called for leaders to step down. Charles Schmitz, a professor at Towson University and president of the American Institute of Yemeni Studies, said US foreign policy on Yemen has been incoherent, but at the same time, the administration knows Ali Abdullah Saleh is a wily politician. "The Saudis, the Europeans and the US wanted him out," Schmitz said. "He sort of played their cards and turned the tables on them and said I'm going to go for a visit in the United States. He's showing that he is a power, he's being received by the superpower that tried to overthrow him, and they have to receive him as a head of state." No one really knows whether Saleh will frustrate US officials and return to Yemen to jockey for power with the new government there. "The guy is really tricky and nobody knows what he's going to do next," said Gary Sick. "But a lot of Americans regard him as someone with a lot of blood on his hands, and a potential war criminal and the idea of giving him a nice cushy place to live for the rest of his life probably doesn't appeal." With his departure late on Wednesday, Saleh's already signaled that he doesn't intend to just remain in New York. Despite the US's attempts to keep Saleh out of Yemen, he has announced that he plans to attend his successor's inauguration in Sana'a next month. What role, if any, the ousted president will play in Yemen's new government, and whether the US will continue to go along, remains to be seen.