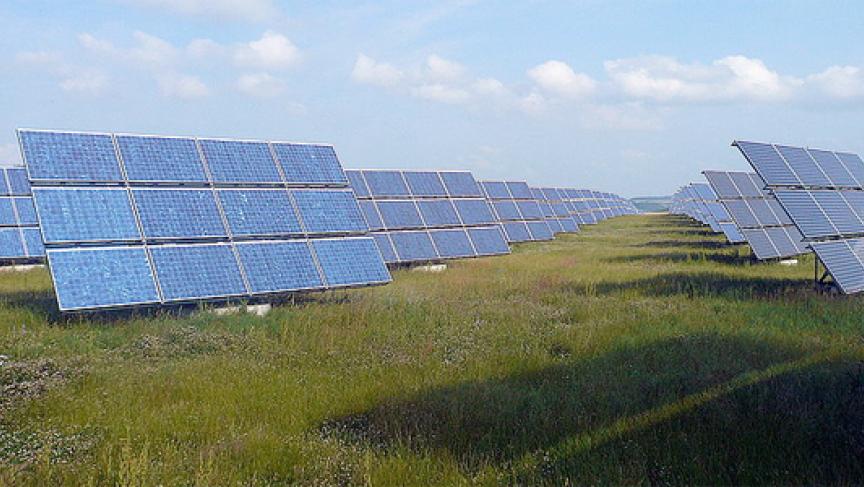 The Erlasee Solar Field in Germany is an example of the many installations of solar power that government subsides in Germany have made possible. (Photo by Rainer Lippert via Wikimedia Commons.)

On the eastern edge of Munich, construction crews are erecting a business park — block after block of new glass office buildings line a busy street.

From the roof of one building, it’s easy to spot a feature that all the new structures have in common: their roofs are blanketed with blue-black solar panels. It’s an increasingly common sight in Germany. But it also belies the difficulties confronting the country’s solar panel industry, which is losing jobs and companies.

2011 was a banner year for solar power in Germany, where the green energy movement is among the strongest in the world and the solar market is the biggest in the world. Last year, nearly half of all new solar installations worldwide were done in Germany.

That booming market is being driven by places like Munich. The city has pledged to use only renewable energy by 2025, a big part of which will come from solar. The city is investing several billion dollars in solar fields, and city leaders believe the payoff will be financial as well as environmental.

“All renewable energy plants (are getting) more economic,” said Gerhard Urbainczyk, of the city of Munich’s environment department. And “all fossil fuels get more expensive. Which guarantees that renewable energies remain economic.”

Renewables have become more economical here in part because of government subsidies begun over a decade ago. The system of price supports helped lead to a boom in the manufacture and installation of solar panels.

But that boom has also sewn the seeds of its own troubles. Germany’s minister of Economy, Phillip Roesling, said the subsidies have gotten too expensive for the government to sustain, and that they have also become a disincentive for competition.

“We are aware of all the disadvantages that come with subsidies,” Roesling said recently. He said subsidies put the brakes on innovation, which is essential for German companies to stay competitive.

So the government is beginning to reduce the subsidies. They dropped 15 percent on Jan. 1, and are set to drop again later this year. The move follows similar moves to cut renewables subsidies in Spain and the United Kingdom, but comes at an especially bad time for German solar panel manufacturers. The booming solar market here has brought a flood of competition from outside Germany, mainly from China.

“There are still too many modules in the market,” said Richard von Hehn, of the German solar company Gehrlicher. von Hehn said the influx of cheaper Chinese imports has shaken his industry to the core.

“Companies will struggle with prices way below their costs, and that’s not good for the market,” von Hehn said.

According to Germany’s solar association, some 20,000 jobs were lost last year. Several once-high-flying German solar companies have already closed their doors, and von Hehn said the subsidy cuts are likely to force other companies out of business as well.

But not everyone in the business here is glum about their outlook. After more than a decade of subsidies, known officially here as feed-in tariffs, the government thinks Germany’s solar industry is poised to stand on its own two feet. Michael Povlin, a Munich-based manager of the panel maker Abound Solar, agrees. He said the next couple of years might be tough, but the industry in general will benefit from quickly falling production costs.

“We’ll be able to produce electricity cheaper than the end customer’s price,” Povlin said. “That’s where you want to be — selling without depending on feed-in tariffs, not depending on politicians who want, and then don’t want, green energy.”

Povlin and other industry leaders say Germany’s solar market is hardly drying up. It’s just getting more competitive. But just about everyone involved expects demand here to stay very strong. Even as the government cuts subsidies, it’s maintaining its goal of weaning itself off nuclear power by 2020, and it’s still counting on solar to help fill the energy gap.