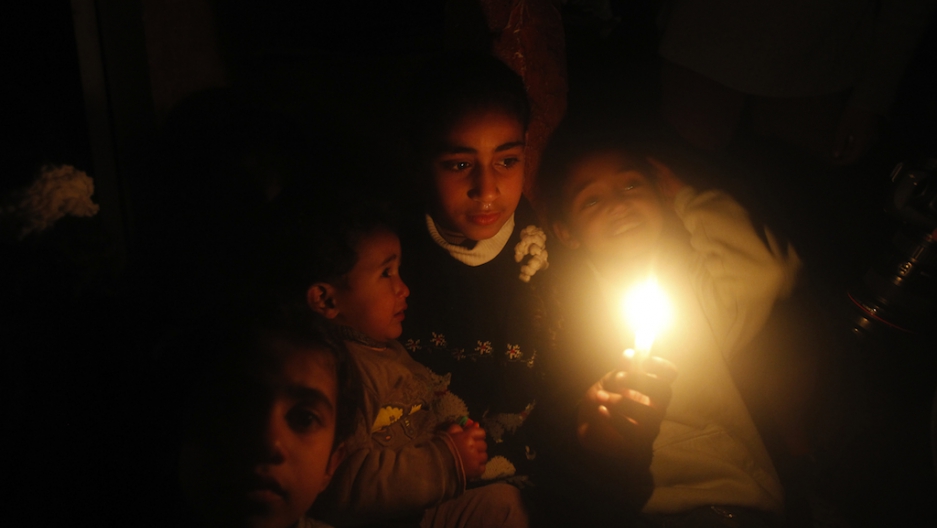 Palestinian children sit at their home during a power cut at the Shati refugee camp in Gaza City earlier this month.
Credit: MOHAMMED ABED
Share

The lights are out again in Gaza, the tiny Palestinian enclave ruled by Hamas. But with a partially lifted Israeli blockade and rival factions Hamas and Fatah (somewhat) on the mend, why is the territory's sole power plant still sputtering to a stop?

There's no simple answer, and tracing the source of Gaza's constant electricity problems is often as difficult as mapping the conflict itself. For years the state of Gaza's power plant, built during the relatively optimistic years following the 1993 Oslo Accords, has been linked with the region's politics.

This time, Hamas authorities and Gaza residents are blaming the outage - which kicked-in on Feb. 14 and affects everything from people's homes to hospitals and water pumps - on a shortage of black market fuel coming through the underground tunnels from Egypt.

Some reports say Egyptian security forces are clamping down on the movement of smuggled goods in the lawless Sinai region, but the source of the shortage is still unclear.

More from GlobalPost: Fears of humanitarian crisis as Gaza power plant runs out of fuel

Until Jan. 2011, Gaza's power plant ran on industrial-grade fuel imported from Israel, which under the blockade restricted the amount to run just one of the plant's three turbines.

This, coupled with a dispute with the Fatah-led Palestinian Authority (PA) over Gaza's reportedly unpaid electricity bills, prompted the energy authority in Gaza to modify the fuel coming from Egypt so that it could run the power plant without relying on the PA and Israel. (The PA is supposed to use European Union funds to purchase the Israeli fuel for Gaza, but says Gaza's Hamas-run government doesn't do its part to help foot the $13.3 million bill).

The man who spearheaded the initiative, power plant manager Dirar Abu Sisi, is now in Israeli jail after having been allegedly kidnapped by Israeli security forces from a train in the Ukraine in 2011.

Crippled by an Israeli air-strike in 2006, following the capture by Palestinian militants of Israeli soldier Gilad Shalit, much of the rest of the power plant remains in disrepair. Israel still limits the type of items that go into the Gaza Strip, including many construction materials, that it says can be used by militants to make weapons.

On Monday, Egyptian officials met with Hamas Prime Minister, Ismail Haniya, and reportedly agreed to help temper the crisis by providing more fuel, helping repair the plant, and hooking up the isolated territory to the regional power grid - in a move that would boost Egypt's influence in Gaza.

Right now, Egypt supplies about 17 megawatts of electricity to Gaza at the cross-border town of Rafah in the southern Gaza Strip. Israel supplies roughly 120 megawatts through feeder lines at Gaza's north, and the power plant provides another 70 megawatts to Gaza's 1.7 million people.

It's being reported as a so-called "Gaza energy deal", brokered between Egyptian officials, the PA, and with the involvement of Hamas contacts.

But so far just 300,000 liters of diesel fuel have been transferred to Gaza from Egypt - and through the underground tunnels. The power plant needs 600,000 liters per day.

“Egyptian officials said we should put an end to this problem and legalize the process and not leave it to the black market and smuggling,” Omar Kittaneh, the head of the Palestinian Energy Authority, told the Associated Press on Monday. “I think the atmosphere of reconciliation made this possible.”

But as the politicians stroke their egos, negotiate, and talk of grand development plans, tonight many Gazans will still be in the dark.