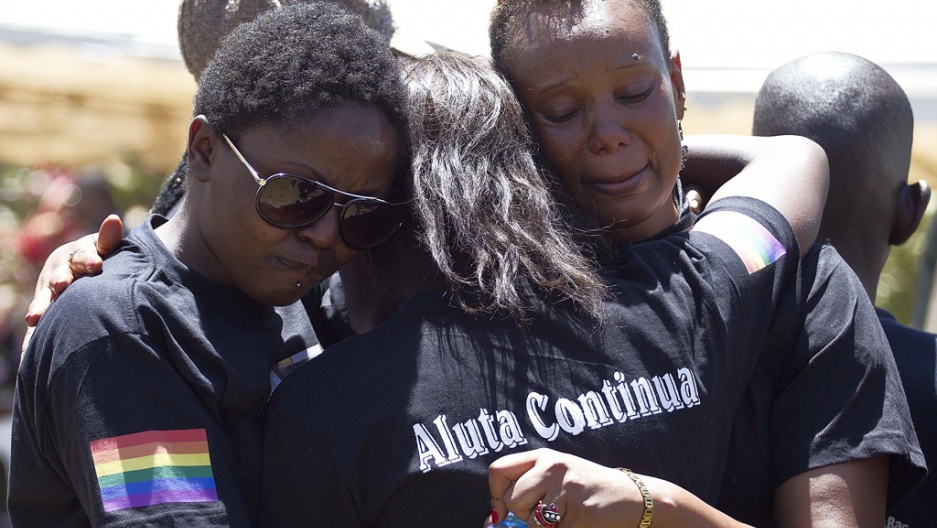 Ugandan gays are frightened by the reintroduction of the anti-homosexuality bill in parliament. Here members of the Ugandan gay community mourn at the funeral of murdered gay activist David Kato near Mataba, on Jan. 28, 2011. Although the police claims it was most likely a petty crime, targeting Kato's money, many members of the gay and the human rights community hold the Ugandan government responsible for not battling the growing threats to homosexuals.
Credit: Marc Hofer
Share

KAMPALA, Uganda — Uganda’s notorious Anti-Homosexuality Bill received a raucous welcome when it was reintroduced to the new session of parliament Feb. 7. Cheering members of parliament banged on their desks and chanted “Our bill, our bill!”

“You only need to have been there during parliament when it was introduced to [see] the massive support that we have,” said MP David Bahati who proposed the revamped bill, which no longer mentions the death penalty but does call for life jail sentences for gays.

First proposed in late 2009, the bill was roundly condemned by the international community — US President Barack Obama called it “odious” — and the proposal died at the end of the last legislative session in this small East African country.

Since then, the bill's lawmakers went back to the drawing board, removed mention of the death penalty by way of softening the law, and have come back for another shot. The reintroduction of the legislation has aroused fears among Uganda's gay community that the draconian bill will this time actually become law.

“People are going to be forced to go underground,” said Mugisha.

The death penalty, which the earlier bill stipulated for some homosexual acts, has been removed from the new legislation, Bahati said. However, the proposed bill still calls for jail sentences of up to life imprisonment for homosexuality, according to Bahati.

Two days after the bill was reintroduced, Uganda’s cabinet issued a statement which appeared to distance President Yoweri Museveni's government from the legislation, calling it the initiative of a government “backbencher.”

“It does not form part of the government’s legislative program and does not enjoy the support of the Prime Minister or the Cabinet,” read the statement issued by the government and signed by Simon Lokodo, Uganda’s minister of ethics and integrity. “The facilitation of this debate should not be confused for the government’s support for this bill.”

But just the next week a raid by Lokodo on a conference of gay activists quickly dispelled any notion that the Ugandan government is a friend to the country’s gays and lesbians.

About 30 gay activists were holding a capacity-building workshop at a hotel in Entebbe, on the outskirts of the capital, when the minister stormed in accompanied by a policeman.

“The minister came and told us he wanted to shut down the workshop,” SMUG’s Mugisha said. “He said he was acting on behalf of the government of Uganda.”

Lokodo, a former Catholic priest who wears a cross pinned to his suit, later said the gathering violated the country’s laws.

For many in the gay community, Lokodo's action rendered his earlier statement on the bill void.

“[With] the minister of ethics and integrity coming from the president’s office we are afraid now,” Mugisha said. “That shows that there is no protection from the state and the state is in support of the bill.”

Judging by the reaction of members of parliament at its reintroduction, the bill enjoys broad support and political observers say that if it reaches a vote in the house it is likely to pass.

“If there is a vote on it I think it will pass. The question is whether it will be signed into law and I think it may remain on the president’s desk for as long as he needs it to,” said Angelo Izama, a Ugandan political analyst and founder of the Kampala-based human security think tank Fanaka Kwawote.

Despite statements that ostensibly distance Museveni from the bill, the legislation serves a useful purpose for him. The long-time president, now in his 26th year of power, has recently faced challenges from within his own party over his handling of Uganda’s nascent oil industry. The bill provides a much needed distraction from those criticisms.

“What [the Anti-Homosexuality Bill] has really done is that it has provided something that MPs could agree on as opposed to the things that they have been disagreeing on. Oil issues have been very polarizing and the Bahati bill — everyone agrees on that,” Izama said. “It’s meant to keep MPs focused and united.”

Western governments have recently been more outspoken on gay rights abroad, with both Britain and the US suggesting that they may consider tying foreign aid to respect for the rights of homosexuals.

But many in Uganda resent what they see as outside interference in the country’s internal affairs. And the outcry from the international community on this issue may actually have the opposite of its intended effect. Since the furor over the bill abroad, some Ugandan lawmakers seem even more determined to pass the bill to prove the country’s independence from the West.

As Bahati said, “We are legislating this for Uganda, not for the international community.”

That’s perhaps why SMUG’s Mugisha said that his organization is focused on fighting the legislation at home rather than abroad. Given the strong Ugandan aversion to Western influence in internal affairs, Mugisha said, “Local pressure from human rights organizations here is likely to have more effect on stopping the bill.”