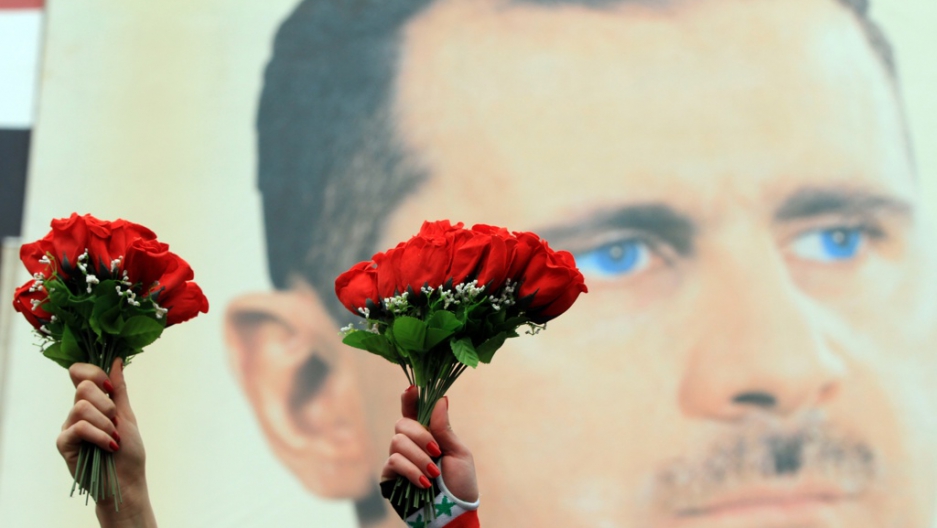 Syrian demonstrators hold up red flowers for Valentine's Day in front of a portrait of Syrian President Bashar al-Assad during a rally to show their support for their leaderin central Damascus on Feb. 14, 2012.
Credit: Louai Beshara
Share

DAMASCUS — The Syrian regime claims armed gangs are responsible for the current unrest rocking the country. Protesters say security and military forces have killed thousands calling for freedom and regime change. The international community looks on.

On the ground, meanwhile, deep divisions are emerging over who is right and wrong, and where Syria will go from here.

"I live in Berzah, I saw what happened this morning," said Sari, referring to the security crackdown on the Damascus suburb in the early hours of Feb. 14. "They [the security] knew exactly who they wanted. They entered the houses of the people who have committed crimes."

Sari is from the Circassian community, which numbers more than 40,000 in Syria. Like many others from minorities in Syria, Sari backs the regime of President Bashar al-Assad.

"From my balcony I see what is happening. The protesters shoot at the security forces and they shoot back," he said.

Sari, in his 20s, worked as an editor at an English-language newspaper until late last year when it closed due to falling advertising revenue.

"The opposition and demonstrators want the president out but what is their plan then? They go on television and scream about the situation inside Syria while they sit in Cairo or London. I am here — I see what goes on and I know the truth."

Sari recalls how the members of the Syrian opposition have called for Farouk Sharaa, Syria's vice president, to temporarily take over the presidency and lead a transitional government but believes that because he worked with the last president, Hafez al-Assad, he is not an ideal candidate. "He is worse than Bashar!" he said.

"Last week I was watching Al Arabiya and the presenter became almost hysterical talking about the shells falling on the city. They had a live video stream of the city showing — there was nothing on the screen," Sari said.

Neighborhoods in the central city of Homs have been subjected to almost two weeks of shelling by regime forces. Activists say more than 300 people, including dozens of women and children, have been killed since the offensive against areas hosting members of the so-called Free Syrian Army began on Feb. 3.

"We have not arrived at the point of civil war yet and I don't think we will," he said. "I think the regime will survive. The opposition is too weak and divided."

Across town in an upmarket cafe, Saleem, from Midan, a restive area in Damascus, views both the regime and Syria's future in an altogether different light.

"Do you think it is OK for a regime that kills its own people to stay in power?" he asked.

Saleem sells generators and said that business is presently good, largely due to the rolling power outages plaguing Damascus and its surrounding towns. "But I am selling them cheaper than others," he added.

A temporary law, which banned imports that were taxed by 5 percent or more "showed all us businessmen how silly and backward the regime is," he said. The law, introduced last September, was cancelled after 11 days after a public uproar.

"Bashar had a chance at the beginning of the revolt to begin real change; there was a window of opportunity, but he blew his chance," Saleem said.

"The only way is to civil war. There is no solution. I lived with many Alawites for two years when I was on military service in Aleppo. I know how they think. They have something inside them, a hatred against Sunnis and even Shias. They think they are being attacked and will fight to the death," he said.

Alawites are an offshoot of Shiite Islam and make up about 12 percent of Syria's population. The country’s leadership is primarily drawn from the Alawite minority.

Saleem also believes Bashar and his violent brother, Maher, are solely responsible for the regime's fierce crackdown on protesters.

"The day of the bombing in Midan the streets were closed for four hours before," he said, referring to the bombing on Jan. 6 that killed 25 people and injured dozens more. The Syrian authorities claim Al Qaeda carried out the attack that targeted a nearby police station. "They were preparing the scene."

As Syria enters its 12th month of revolt, all out violence risks engulfing the protest movement. Saleem is not optimistic. "There is no solution. We are on the road to civil war."