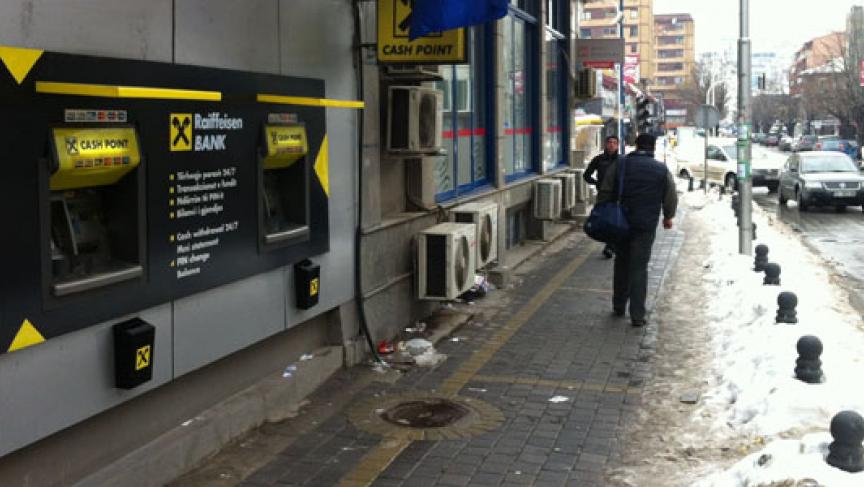 Kosovo uses the euro as a legacy of the Deutsche Mark. When Germany switched to the euro, Kosovo followed suit. (Photo: Nate Tabak)

Share
If Kosovo's economy is on the upswing, it's news to the Krasniqis. Ardian Krasniqis, his wife and their three small children live with his parents in a modest apartment just outside Pristina. Ardian was the breadwinner until he lost his construction job two months ago. Now he's part of the estimated 45 percent of Kosovars out of work. Those with jobs aren't much better off. Wages here average about $300 to $400 per month. Ardian used to work in Germany. He came back to Kosovo to start a family and build a life here. "I regret it because I'm responsible for the children," Ardian says. "They're experiencing the consequences." Ardian's mother, Azemine, pipes in from the kitchen at this point. She says Ardian's wife makes 150 euros a month working in a kindergarten kitchen. While Azemine and her husband collect 120 euros from their pensions. All told, seven people are living on less than 400 dollars a month in a place where milk can cost more than in the US. Ardian says the family only gets by because his sister sends them money from Austria. She's a doctor there. "We have it hard. If it weren't for my sister, it would be impossible," he says. Each year, Kosovo's Diaspora sends home more than $650 million, mostly from Germany and Switzerland. And that money is hugely important here, with foreign aid on the decline. In fact, remittances and government spending are the main reasons the International Monetary Fund says Kosovo's economy is among the fastest growing in the eurozone. But it's still not good enough, says Agron Demi, who runs a think tank in Prishtina. "Kosovo has more than 40 percent unemployment. In order to just have a decrease by half, the unemployment, we need economic growth by at least 10 percent a year … like China, so this growth doesn't mean anything to Kosovo," he says. Subtract government spending and those remittances, and there's not a whole lot driving economic activity in Kosovo. Still, Bernard Nikaj, a top official in the ministry of trade and industry, says the economy is moving. "There is improvement. It's still not at the level we want it to be, I think, but we're working towards that goal," Nikaj says. The goal is being a self-sustaining economy and Nikaj insists that it is slowly starting to happen thanks to reforms aimed at making Kosovo more business friendly. Ermal Meta manages his family's construction company in Pristina. He says revenue grew nearly 15 percent last year. Meta is driving an old Hyundai van to a government-sponsored business park in Drenas outside the capital. His company is building new offices and a factory there. "Well, Drenas is a very good thing for us," Meta says. "Because our business required much more space than we had. So this will be an opportunity to expand our business." The business park offers uninterrupted electricity, running water, and highly subsidized rent. It's the first of its kind since the 1999 Kosovo war, but today there's one big problem. Snow from a recent blizzard is blocking every entrance. "What can I say? Thanks God our business isn't open here yet, otherwise …" Meta says. Companies here face bigger obstacles than a mound of snow, though. Meta says the cost of doing business remains high because Kosovo produces very little. "Aluminium we take from Greece. Plastic for windows, we take from Germany, and steel we import from Italy, Bulgaria … Serbia sometimes. That's why we don't have cash. This is the main problem. Every raw material is imported from outside …." Meta says. His construction company is building a factory to produce light steel to lower their dependence on pricey imports. But Kosovo bank loans come with steep interest rates. "The interest rate is 11 … the lowest you can get … up to 20 percent," Meta says. He says he's trying to stay positive. "I mean, do I have another choice? It's natural law- countries … people do evolve. That will happen with Kosovo too." But when remains to be seen. Kosovo's economy could hit some harder times if growth slows in Germany and Switzerland. Then remittances from Kosovo's Diaspora could follow suit.