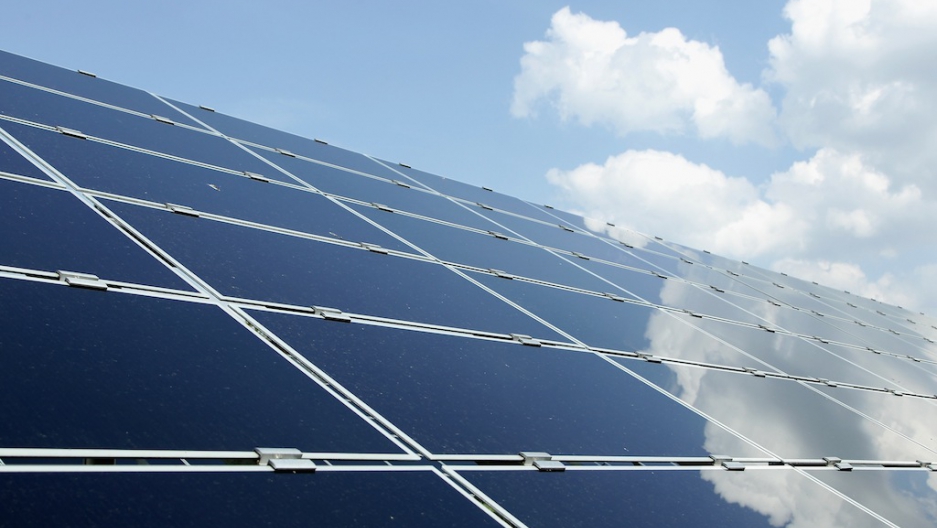 Solar panels soak up the rays in Berlin. Germany now has half of the world's entire solar energy capacity.
Credit: Andreas Rentz
Share

BERLIN — Last year Germany produced a record amount of energy from solar panels installed on rooftops and in fields across the country.

With a total of about 25 gigawatts of installed panels, Germany now has half of the world's entire solar energy capacity.

An unprecedented 7.5 gigawatts of panels were added to the country’s energy system in 2011, twice the government’s target.

One would think that for a country firmly committed to ambitious targets for renewable energy and emissions reductions, this would be a good thing. Instead, politicians in Berlin are furiously negotiating to find a way to slow down this rapid expansion, due to the huge costs involved in paying for solar power.

Two ministries in Berlin have been at loggerheads over their different priorities in tackling the problem. While Economics Minister Philipp Roesler, leader of the Free Democrats, wants to make the energy costs cheaper, the Environment Ministry, headed by Norbert Roettgen, a member of Chancellor Angela Merkel’s Christian Democrats has to balance economic interests with Germany’s climate goals.

Solar, it appears, will be the likely loser, as both ministries foresee less support for the industry in the future.

The current debate is focused on the solar subsidies that are largely paid for out of consumers’ pockets.

Critics argue that the costs have shot up, as solar expanded from just 1 percent of energy in 2009 to 3.5 percent in 2011. It’s on target to rise as much as 4.5 percent this year. This expansion is pushing up energy costs in general for the German economy.

Supporters say prices are already starting to fall, that the majority of expenses have already been invested. They say that support for the industry needs to be maintained now more than ever.

In a sense, Germany’s solar energy policy is a victim of its own success.

Over a decade ago, politicians enacted a complicated subsidy system designed to kick-start the green-energy sector, which faced enormous competitive barriers when pitted against mature energy sources like coal and nuclear.

The Renewable Energy Sources Act of 2000 set up a system under which energy companies were obliged to buy all electricity generated by green-energy producers at elevated prices, known as a feed-in-tariffs.

The government established feed-in-tariffs, or FITs, that gradually decreased over a 20-year period, to reward rapid adoption of renewables, while also ensuring that green-power generation would eventually become competitive.

In practice, the cost of producing solar dropped more quickly than the tariff cuts. That meant that customers were in effect simply ploughing money into massive profits for the booming solar industry.

Politicians in Berlin have become alarmed that the policy is becoming harmful for Germany. The rapid rate of panel installation has translated into high costs for utility companies and customers. Moreover, overcapacity and competition from cheaper solar modules, produced in Asia, mean that many domestic companies can’t compete. Around half of the panels now being installed in Germany are imported from China.

The result has been a spate of German solar companies going bust.

To address the problem, the government has already doubled the pace of tariff decreases each year from 5 percent to around 10 percent.

The Environment Ministry is now proposing cutting the tarrifs more rapidly so that they keep pace with the dwindling costs. Roettgen has told solar industry representatives that he would like to reduce these subsidies on a monthly basis instead of twice a year.

However, the economics minister is proposing much more drastic measures. In a draft bill Roesler sent to lawmakers in January, he envisages capping German solar panel installations to just 1 gigawatt a year on average through 2020.

The proposal has alarmed the already struggling solar manufacturers. Environmentalists say it could undermine efforts to develop renewables to compensate for the nuclear stations that Chancellor Merkel has decided, since Fukushima, should close by 2022. Germany’s current target is for green technologies to provide 35 percent of the country’s energy needs by 2020.

For Roesler, the issue is political. He is hoping his opposition to solar subsidies will boost his profile. His party is languishing in the polls, and the issue gives him an opportunity to argue that he is protecting the consumers. There are many — not only in his own party but also in Roettgen and Chancellor Angella Merkel’s party — who sympathize with his view.

Roesler’s position is supported by the pro-industry Rhine-Westphalia Institute for Economic Research, or RWI, which has calculated that solar panels installed in Germany between 2000 and 2011 will cost consumers a staggering 100 billion euros ($130 billion) over 20 years.

“The most important reason to cut the solar subsidies is that from an economic perspective, they are simply a waste of money,” RWI expert Manuel Frondel told GlobalPost. “We estimate that the average German household will have to pay 1,000 euros over the next 20 years as a result of the photovoltaic panels installed in Germany up to now.”

Frondel said that the attraction of installing solar panels has to be urgently reduced. “Otherwise the costs for the energy consumer will continue to rise massively.”

He points out that wind power is far cheaper to produce than solar, and suggests an alternative quota system for green technology would see utility companies opting for wind over solar.

Keeping the solar industry on life support with ongoing tariffs is pointless, Frondel said. “Many of these companies are facing bankruptcy. And of course one could delay their demise for a while by continuing subsidization, whereby the energy consumer pays high subsidies for solar energy, but it makes no sense from an economic point of view. You cannot prevent the collapse of the German solar industry.”

This view is forcefully opposed by Germany’s strong ecological movement, which sees solar as a vital part of Germany’s energy mix.

Capping installation or abolishing subsidies would “bring to a standstill the switch to clean-energy sources,” the BEE Renewable Energy lobby and its green movement allies wrote to the chancellor in late January.

Companies that have invested heavily in solar are deeply concerned with the push from the Economics Ministry. An installation cap would mean “photovoltaic is dead in Germany,” said Franz Fehrenbach, CEO of Robert Bosch, the German car-parts supplier that has branched out into the solar industry in recent years.

For environmentalists, the fact that Roesler wants to kill off the support is incomprehensible. “It is as if we sowed seeds and plants grew and finally started bearing fruit and then shortly before the fruit was ripe, they come with their tractors and mowed them down,” said Gerd Rosenkranz of the non-profit German Environmental Aid.

Rosenkranz admits that solar power has been expensive but argues that most surveys have shown green-conscious Germans are happy to pay a bit more for green technology if it helps the environment. And while the figure of 100 billion euros may seem massive, he points out that this is spread over 20 years for the whole population. “It is not actually that dramatic, which is why people are not rebelling against it.”

He argues that the FITs enabled the German solar industry to eventually produce much cheaper panels, something that benefits not just Germany but the world, as it fights climate change.

“We cannot change the fact that it was expensive in the past, but what is coming now is not as costly,” Rosenkranz said. Cutting off the subsidies at this point, however, would help kill off an industry that is on the cusp of being viable without FITs, he said, adding that setting an installation cap just as Germany abandons nuclear power, is simply “not logical."

And while wind is cheaper than solar, there is currently insufficient infrastructure in Germany to get the energy from the coast to the rest of the country, whereas solar panels can be installed anywhere.

Solar is now on target to make up around 10 percent of the energy mix by 2020. Yet, even with the flood of cheap Chinese solar panels, that development could be put in jeopardy if much of the industry in Germany is allowed to collapse, environmentalists say.

Even solar supporters admit that many companies became lazy on the back of the subsidies and did not invest enough in R&D. “Whenever there is such rapid development then there is going to be a phase of consolidation, during which some companies fail,” Rosenkranz said. “That is terrible for the owners and the employees but that is something that always happens when developments are so fast.”

The companies that remain are dealing with constant uncertainty, awaiting the result of the political wrangling in Berlin. They complain that the constant tinkering with the system makes it difficult to plan or invest.

“It would be crazy if an industry which has been developed with the money of many citizens is driven to the wall before it can really be economically viable,” Rosenkranz said. “It would really be the dumbest thing Germany could do.”