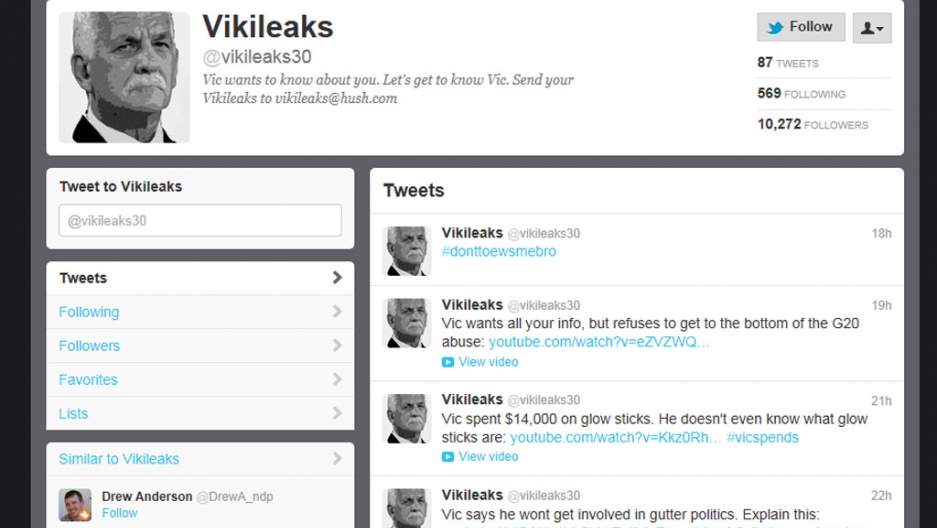 The @Vikileaks30 Twitter account that unearthed messy details about a Canadian politician's divorce has been closed, CBC reported late Friday.

"I am shutting down before any other innocent people are targeted. Please keep up the fight against #C30 Canada," the account read.

The account originated inside the House of Commons, the Ottawa Citizen reported, and Toews called for an official inquiry.

The tweets started after the Conservative government introduced bill C-30, the Protecting Children from Internet Predators act, which Toews sponsored.

Toews attracted extra attention when he told an opposition MP that if he didn't support the act, then he must "stand with" child pornographers.

Opposition critics and everyday Canadians slammed Towes and the act, calling it an unnecessary step considering police and ISPs often work together  in criminal investigations.

To hammer home the point, the account sprouted and began broadcasting details from Toews’ divorce and an alleged love child from a long-time affair with his babysitter.

“Marriage is one of the cornerstones upon which our society has been built." Vic Toews 7/24/2002

The Conservatives suggested the Official Opposition was somehow involved after the Citizen said the @Vikileaks30 IP address also posted pro-NDP updates on Wikipedia.

“It is a little bit rich for a New Democratic Party member of Parliament to stand in this place and talk about attacks and talk about personal information,” Foreign Affairs Minister John Baird said in Parliament today, Post Media reported. “Not only have they stooped to the lowest of the lows, but they have been running this nasty Internet dirty-trick campaign with taxpayers’ money.”

Both the NDP and Liberal Party of Canada denied involvement. The tweets are from divorce affidavits and are public record.

The account had more than 10,000 followers when it closed. The tweets drew to a close with “sanctity of marriage” quotes from the Manitoba Member of Parliament.

"Marriage is a uniquely heterosexual institution, that indeed it is a sacrament." Vic Toews 06/18/2003

Reaction to the public backlash agianst bill C-30 was swift, with the Tory government saying it's willing to accept changes. A Parliamentary representative also said an investigation into the anonymous tweets is underway.

“We are aware of the allegations and we’re looking into the matter,” Heather Bradley, a spokeswoman for the Speaker, told The Globe and Mail.