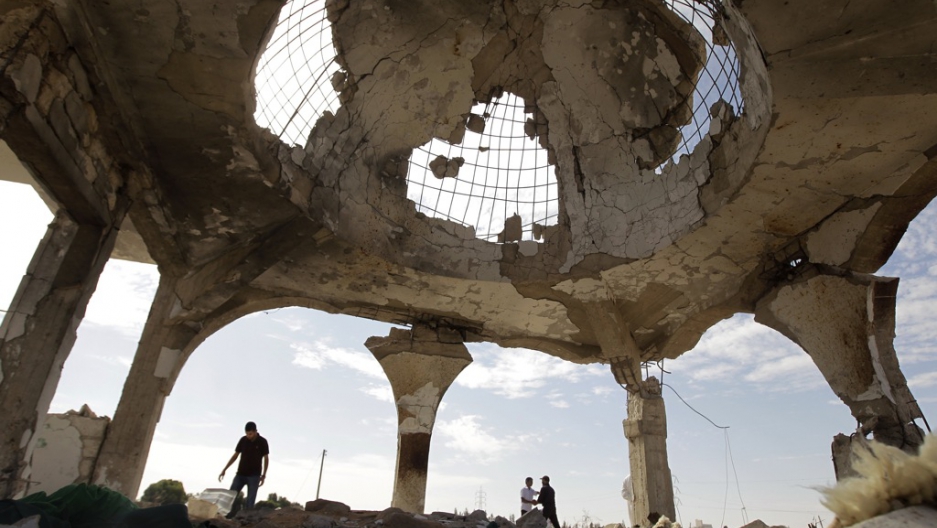 Editor's note: GlobalPost correspondent James Foley was killed on Aug. 19, 2014 by Islamic State militants in Syria, where he had been held for close to two years.

In 2011, Foley spent 44 days in captivity inside Muammar Gaddafi's Libya. This is the second chapter of that story. For the full series, click here.

As we were driven fast over the sandy hills toward Brega, I stared at the back of Clare’s head. The soldiers wore semi-military uniforms — khaki fatigues, web belts and army boots. Like the rebels, they appeared to be mostly teenagers.

Their aggression gave way to a celebratory reenactment of the attack. Pretending their fingers were AK-47s, they shot into the air, laughing. I had seen this kind of behavior before. Soldiers often made light of an attack to mask the confusion and pain that inflicting violence must cause.

We pulled into a neighborhood in Brega, which seemed eerily quiet. The loyalist forces had commandeered a civilian house. All the other houses appeared recently abandoned. The soldiers yanked me out of the truck by the back of my arms, I started to fall out head first. Then one of the leaders stopped the soldier and sat me up before I hit the ground. The entirety of our detainment would be colored by this kind of confusion, acts of violence and intimidation muddled by small acts of decency.

More from GlobalPost: Who are Libya's rebels?

We were marched inside and forced to kneel toward opposite walls. One of the young soldiers came toward me and I cringed, preparing myself for another beating. Instead, he began to wrap my bleeding head with toilet paper. He said some comforting words in Arabic and I felt a fleeting moment of calm.

Clare, Manu and I were taken into the living room and made to sit on a row of couches facing three soldiers. The older one, maybe in his mid-twenties, with slicked-back hair, questioned us in broken English, asking where we were from. Clare and I repeated Ameriki; Manu — Espani.

He held up a photo from my wallet they’d confiscated. It was of my youngest brother Mark in his American military uniform with an American flag behind him. He examined the photo and pointed at me. "Militar," he said.

"No," I replied emphatically. "Brother, brother." I gestured to the back of the photo, to an inscription my mother probably wrote. “Love Mark,” in her precise script, as if that was some kind of proof, for a Libyan who couldn’t read English, that the photo wasn't of me.

"No problem," the young man in charge said. It was the first time that I heard that phrase, but it wouldn't be the last. I'd hear those words many times over. The phrase would come to mean its opposite. For me, it indicated that, in fact, this was a big problem. “Two or three days you go back to your country,” he said — another line I would hear many times.

Two young soldiers stood guard, one with his AK-47 pointed in our direction. We asked them to loosen the bonds, which had become very uncomfortable, but they shook their heads.

Clare whispered to me if Anton was okay. Her glasses had been knocked off when she was punched, and she’d seen Anton in a pool of blood, but wasn't sure what had happened. Manu and I told her Anton was dead. Clare looked wounded. The soldiers yelled at us to stop talking.

We could hear soldiers trudging back and forth in other rooms. A few sauntered into the living room. Their youthful swagger made me nervous. A skinny one saw my neck pouch and rebel press ID under my collar. He pulled out the ID, flipped it over and examined it with curiosity. He made some jokes in Arabic and spit at me. Their leader ushered them out like children bothering the dinner guests.

More from GlobalPost: The race is on to find Libya's missing missiles (VIDEO)

"You think we're going to Tripoli?" Clare asked. I nodded. The thought was dreadful. Several New York Times reporters had been captured weeks earlier. It was a story we knew by heart. It had read like a movie script, and now it was our movie script.

Hours later, an older sergeant came in wearing a military hat. He told us that we would be taken to Sirte, Gaddafi’s hometown. We were blindfolded and another set of zip ties were wrapped around our wrists. We were shoved in the back of a small sedan. The car stopped at dozens of checkpoints along the coastal highway. Too tall, my knees were digging into the back of the driver's seat. A guard I could not see turned around to re-position me. At some point in the ride, I felt a hand reach for my neck and slide down my chest. I tried to be still, but my arms hurt more than anything. He opened my neck pouch and took from it all the money I had.

A strange kind of tantric music mixed with words from the movie "300" played over Gaddafi's infamous "Dar, Dar, Zenga, Zenga" speech. Listening to that hoarse, enraged voice, over and over, the terror of where they were taking us began to sink in. At one checkpoint, a rough voice came through the window. “Fuck Sahafa, Fuck Obama, Fuck Everybody.” A voice at another checkpoint growled, “You are in Trabulous (Tripoli) now!”

“Wait, we’re in Tripoli?” Clare asked, incredulous. It was impossible. We’d only been traveling west for about three hours. The voice must have only been trying to intimidate us. We decide that we must have been in Sirte.

We felt the car roll through gates that we assumed were military. We parked and were marched up a flight of stairs. They forced us down and we knelt on the concrete. A pair of hands unwrapped the double layer of cords and zip ties and my arms and shoulders were finally free.

They ushered us into a lone cell, I flopped onto a mattress on the floor. I was too tired to think. I drifted to sleep. Later that night, I was again blindfolded and taken before some kind of official. I could hear them flipping through the pages of my passport. I told them I was a journalist and who I worked for. At the end of about an hour of questioning, the interrogator said he thought I was a spy. “I’m not a spy, I’m a journalist,” I said. I was guided back down the stairs and into my cell.

The next morning I woke up in a white washed cell, grimed with streaks of either blood or feces, or both. Sun peeked through from a barred window high on the back wall. The initial capture and beating replayed through my mind on a loop.

A man dressed as a civilian appeared at my door. I asked for a cigarette, he gave me one and, of all things, a banana. It was the first of many acts of kindness that would get us through the coming weeks. “We are prisoners too,” he whispered with a smile.

I spent the whole day thinking and trying to sleep, my mind wandering between anguish and confusion. I was given rice dishes with no silverware. I ate greedily with my hands.

That night we were pulled out of our cells. I was told to wash the blood from my face and hair. Clare and Manu appeared in the hall and we held a long embrace. We were guided upstairs and asked to do an interview for the state-controlled television station. We discussed among each other whether or not we should agree to do it. A television crew was already setting up. We thought that some channel outside of Libya might pick it up, and it might be a good way to begin ingratiating ourselves with the Libyan government.

A female reporter with beige make up and a beige hijab began arranging our chairs in front of the camera. She asked Clare and I who had done the damage to our faces. We said it had been Gaddafi's soldiers. “No!” she replied. “Impossible.”

More from GlobalPost: Rebel economy begins to churn as assault on Gaddafi marches on

The interviewer held out a microphone bearing the insignia of State TV. We replied as truthfully as we could. The interviewer, a man, asked how we felt about the NATO air strikes that had recently begun across the country. Manu said he was opposed to international intervention in any internal conflict. I mumbled something about how air strikes were good if they protect civilians, bad if they kill civilians. He reminded me to look at the camera.

The next afternoon we were pulled out of our cells and led upstairs without blindfolds. A large man said we were going to Tripoli, confirming our earlier suspicions. We walked out, unbound in the sun, not quite believing how freely they were treating us. There were three other captured journalists in the van with us — Hassan Zeitouni, an Algerian British television correspondent; Megdi, his Egyptian cameraman; and another younger Libyan Egyptian who appeared to be their fixer.

Zeitouni was wearing clean, even elegant clothes. They were captured rather cordially, it seemed. He said that the captain of the group who had captured them was Gaddafi’s cousin. He was confident we’d be released soon. With no blindfolds and more cigarettes, we watched the desert countryside passing by as the van flew toward Tripoli. All of us were lifted by the journey.

But we had darker things on our minds. “We cannot say anything,” Manu said, his eyes full, referring to Anton. It was what we had all been thinking. Clare and I nodded.

More from GlobalPost: Chapter 3: The Trial