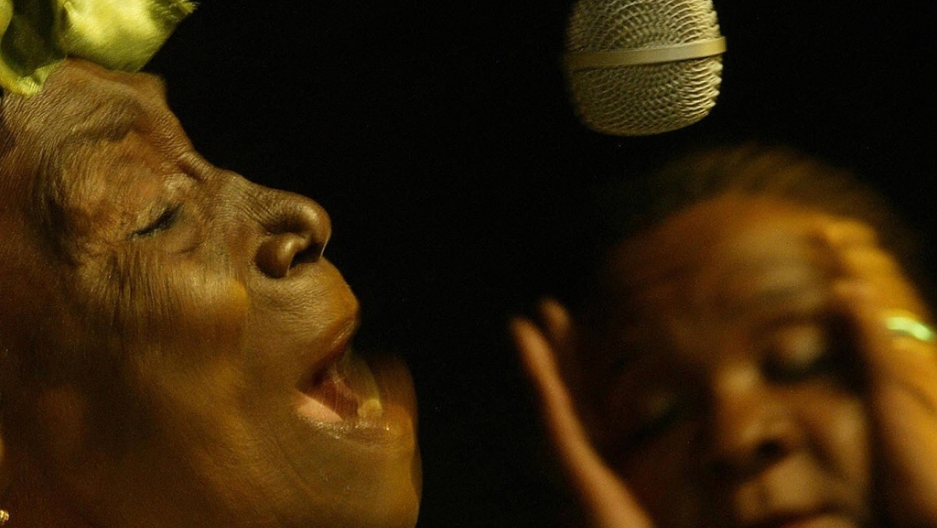 Iconic Swahili traditional music Taarab star, Bi Kidude, is one of many Tanzanian musicians whose music is recorded on the Radio Tanzania archives that are being preserved. The project will digitize recordings that are currently on reel to reel tapes.
Credit: Tony Karumba
Share

Tanzania was at the cutting edge of Africa's struggle against colonialism and white minority-rule, and the nation's music became famous for mixing traditional rhythmns and harmonies with electric guitars.

Key political milestones and vital African music recorded and broadcast by Radio Tanzania are now on reel-to-reel tapes filed away in a building behind Dar es Salaam’s railroad tracks.

The radio, part of the state-owned Tanzania Broadcasting Corporation, has more than 100,000 hours of unreleased tapes holding ethnographic recordings, afro-jazz dance music and political speeches used to fuel support for independence movements across Africa, stored on the dusty shelves. The recordings, which chronicle the rise of a nation, have languished for decades, exposed to the heat, humidity and natural decay.

That is all about to change.

The Tanzania Heritage Project, a cross-cultural preservation effort, recently launched a global campaign to digitize and restore the entire collection. It plans to offer MP3 downloads, a ‘best of’ compilation CD, and eventually a documentary film.

“We are young, idealistic, and this is a big dream,” said Rebecca Corey, the American director of the project. “We know this has been tried before, but it has failed — because it’s expensive.”

In just a few weeks, via the popular crowd-funding website Kickstarter.com, Corey and her team raised more than $17,000 from individual donors, music lovers, preservationists and cultural enthusiasts, to help purchase new equipment to digitize the archives.

Throughout its history, Radio Tanzania was both a key instrument of the state and a public service.

For many years it had the only recording studio in Tanzania. The building was a lively hub of culture, frequented by Tanzanian music legends like King Kiki, or “Kitambaa Cheupe" — so-called for his habit of wiping the sweat from his brow with a white handkerchief when he performed — and the Mlimini Park Orchestra. Others recording at the studio include Arabic taarab musicians, traditional Ngoma drummers, short-lived Dar es Salaam jazz bands and prominent political figures.

In most cases, the Radio Tanzania recordings are the only copies that exist — and up until now very few have had access to the tapes, or even knowledge of their existence.

Listen to some of the music in the Radio Tanzania archives

Bruno Nanguka, known as “The Librarian,” joined Radio Tanzania back in 1974, and has since worked his way up to the Head of Library Services. His knowledge of the archives, and the treasures they hold, is the most intimate in the country. “My colleagues — some are dead, some retired. I’m alone now,” said Nanguka.

Nanguka has been slowly and infrequently trying to digitize the archives himself, but with just one man and one digitization station it’s a slow process. To copy all estimated 100,000 hours, it would take him around 15 years — working nonstop.

Regardless of the time or effort, the need from a historical preservation perspective is pressing.

Benson Rukantabula, a young Tanzanian who helped found the project, hopes that by making this music available, the country can both preserve its heritage and inspire young Tanzanian artists through the musical storytelling of their past. The popular Bongo Flava music that blares from local nightclubs hardly reflects Tanzania’s rich musical history, he says.

“The messages are all messed up... If we digitize the archives, they can know where they lost their way,” Rukantabula said.

Perhaps the greatest obstacle the project will face is the government itself.

The Tanzania Broadcasting Corporation is a state-owned company, and the legal rights to Radio Tanzania's recordings are murky. Even if the team does manage to digitize everything, they could be prevented from releasing it. There have been musicians fighting for years to get royalties from some of the music recorded at Radio Tanzania studios, with no luck.

Of course, not everything in the archives is pure gold. There is perhaps little popular demand for “The Late Aga Khan’s Speech at the Weighing Against Diamonds Ceremony,” recorded on August 10th, 1947, which was the first reel archived in the speeches section.

But there are many valuable nuggets in the 50 years of history and to lose the archives to a fire, flood, or simply the elements of time, would be a tragedy for scholars, musicians, historians, music lovers, and ultimately Tanzania itself.

“Reel-to-reel won’t last forever,” Benson said. “We need to show the world this music, to share our culture and preserve our history for the future generations.”