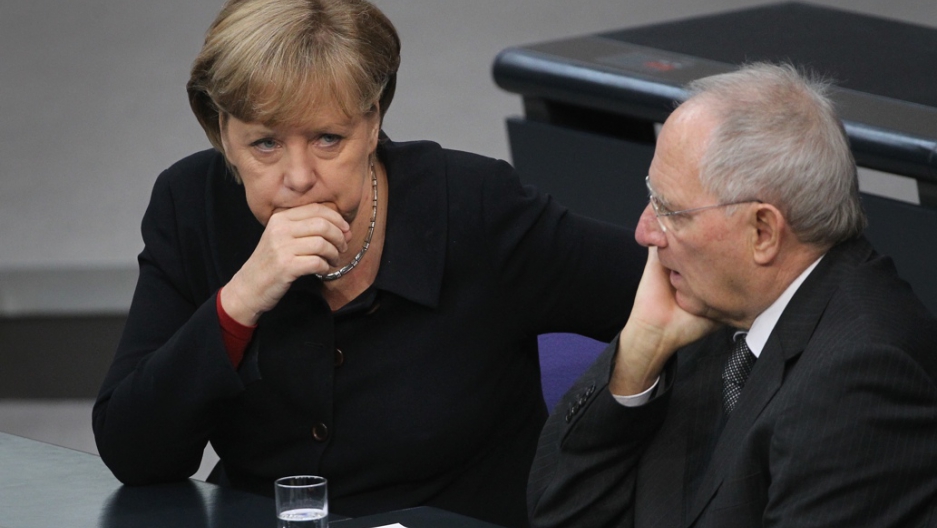 BERLIN — There is a lot of brinkmanship going on in Europe as Greece teeters on the edge of bankruptcy.

Germany in particular seems to be playing hardball ahead of Monday’s crucial meeting of euro zone finance ministers.

Markets on Thursday were jittery as a deal on the Greek bailout remains elusive, with borrowing costs for Italy and Spain rising on concerns that they could be dragged back into the euro crisis.

And with the tone between the Greece and Germany becoming increasingly acrimonious, there are still fears that the EU could let Athens default.

Comments by the German Finance Minister Wolfgang Schaeuble that Berlin was not prepared to throw money down a “bottomless pit” has only served to inflame anti-German feeling in Greece.

President Karolos Papoulias, an 82-year-old veteran of the resistance to Nazi occupation of Greece during World War II, lashed out at the German minister. "I cannot accept Mr Schaeuble insulting my country," Papoulias said on Wednesday night. "Who is Mr Schaeuble to insult Greece?”

It’s a sign of the growing frustration in Greece, which feels that as soon as it meets one set of criteria the troika of international lenders – the European Central Bank, the European Union and the International Monetary Fund – shift the goalposts again.

The dramatic events of the past week have only served to fuel that frustration. The Greek parliament passed a raft of deeply unpopular austerity measures on Sunday, after which the government found another 325 million in savings and the leaders of the two major parties signed up to honor the bailout terms even after the April elections.

Yet even though Greece met these conditions, doubts it seems remain in the euro zone’s richer countries such as Germany, the Netherlands and Finland, about Athens’ commitment to reforming the Greek economy.

"Questions remain that are very important to Germany and other member states about the sustainability of the program," a German government official told Reuters.

Germany has been burned by previous assurances from Greece that it would meet the terms of its previous bailout in May 2010. And politicians in Berlin are fully aware that the rescue packages are deeply unpopular with German voters who question why they should be paying for the problems of more profligate countries.

Meanwhile the suspicion in Greece is that they are being strung along by some countries that would rather see them default and exit the euro zone. “There are many in the euro zone who don’t want us anymore,” Greece‘s Finance Minister Evangelos Venizelos said earlier this week.

Officially Germany is determined to keep Greece in the euro zone family. Chancellor Angela Merkel’s spokesman Steffen Seibert on Wednesday rejected any suggestions that Berlin had reconciled itself to a Greek default. “I can say very clearly for the German government that these rumors are wrong – there is no such decision by Germany,” he said, adding that Germany is working with others in Europe to find “a practicable way out of the crisis for Greece”

Yet Germany and the other remaining triple A-rated countries have been hardening their stance toward Greece. But it’s not yet clear if they genuinely believe they could withstand a Greek default or if they are bluffing, hoping to leverage the pressure on Greece to impose stricter surveillance over the country to ensure it sticks to the terms of the bailout.

The brinkmanship is likely to continue until Monday’s crucial meeting of euro zone ministers, who on Wednesday failed yet again to give the green light to the 130 billion euro ($172 billion) bailout that Greece desperately needs to stave off default.

Jean-Claude Juncker, the head of the Eurogroup of finance ministers, said Greece had made "substantial further progress," but added that "further considerations are necessary regarding the specific mechanisms to strengthen the surveillance of program implementation and to ensure that priority is given to debt servicing."

He was likely referring to a recent proposal by France and Germany to set up an escrow account that would ensure Greece’s lenders were paid. European officials are reported to be working on plans for such an account, which would allow the troika a certain amount of oversight over Greece’s budget, something that would be unprecedented in the euro zone.

Furthermore, according to Reuters, euro zone finance officials are looking for ways to delay part or all of the second bailout program while still avoiding disorderly default. Greece has a 14.5 billion euro bond repayment due on March 20.

It is apparent that there is deep unease in some quarters that Greece’s forthcoming election in April could throw a massive spanner in the works. After all the austerity measures are hugely unpopular with ordinary Greeks and the parties on the far left and far right oppose them.

The Germans are now reportedly suggesting that the smaller political parties in Greece also provide written assurances that they will stick to the deal. And Schaeuble has even raised the possibility of postponing the elections for the time being.

"When you look at the situation in domestic Greek politics ... the question is: who is going to guarantee that what we decide now will also be valid after the elections?" Schaeuble told SWR radio on Wednesday.

Meanwhile, Dutch Finance Minister Jan Kees De Jager told Dutch paper Het Financieele Dagblad, that another option was to delay delivering the bailout in full until after the election.

Whatever the true intentions of the major players in Europe, the uncertainty is doing little to quell the ongoing sense of crisis in Europe.

And even if Greece were to secure the bailout, there is no guarantee that it can evade default in the long run. The economy has been in recession for five years and the latest figures show it contracted by 7 percent in the final quarter of 2011. The punishing austerity measures give little prospect of Greece being able to grow its economy enough to pay back its creditors.