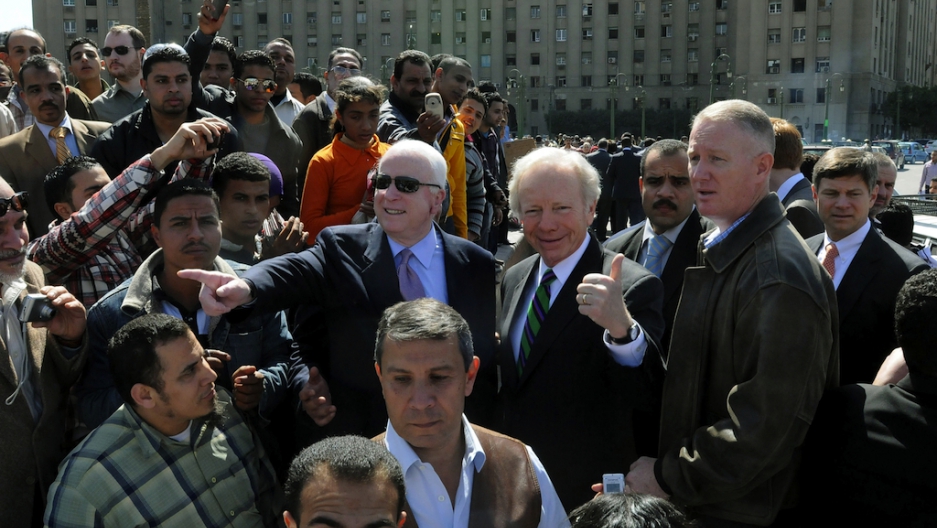 I bet Egypt's Muslim Brotherhood never thought they'd find an ally in an aging Republican lawmaker (neither did I, really).

But when on Feb. 13, Sean Hannity, the uber-conservative Fox News and radio personality, slammed the Brotherhood as radical Islamists that shouldn't receive a dollar of US taxpayer money on his nightly show, Arizona Republican Senator John McCain stepped up to the plate to set Hannity straight:

"First of all, Islamic extremists are not in power. The power is still being wielded by the military junta that took over, by the way who are, they and the last vestiges of the Mubarak regime, keeping Americans in a situation where they have to go to the US embassy. So, it’s not the Muslim Brotherhood who’s doing this, it’s the remains of the Mubarak regime."

Later, Hannity says the Muslim Brotherhood told its people to "prepare for war with Israel." (Brotherhood leaders have issued contradictory statements on whether or not they will seek to maintain the peace treaty with Israel, but have so far not called for war).

Read more from GlobalPost: Inside the Muslim Brotherhood: Part 1

"In the case of Egypt, the Muslim Brotherhood is split. They have not obtained power yet. There are groups of them that want to have good relations with us. They may be an Islamic country, Israel is a Jewish state. So let’s wait and see."

The Muslim Brotherhood, which just won a near-majority in parliament but has yet to implement any Islamic-inspired legislation, has so far welcomed US diplomatic overtures, with high-level Brotherhood leaders meeting with the deputy secretary of state.

Though many leading Brotherhood members did tell GlobalPost they support a government crackdown on US NGOs in Egypt, and are unconcerned about a potential halt in US aid.

If Hannity had that piece of information in his arsenal, his argument might have been more convincing.