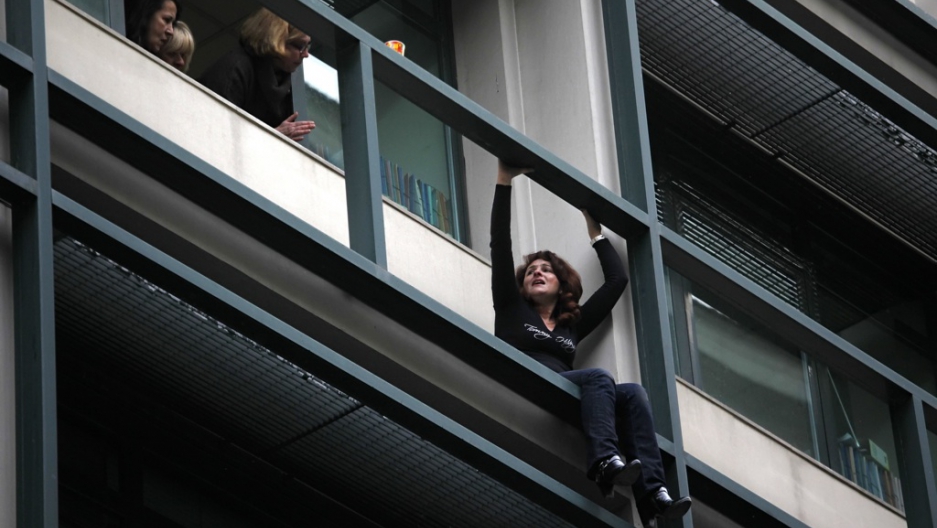 An employee of the state-owned Labour Housing Organization sits on the ledge of the company's building as she allegedly threatens to jump, in Athens, on Feb. 15, 2012, after the government decided to shut down the organization and lay off its staff. Greece is under pressure from the EU and the IMF to reduce state spending in order to qualify for loans and avert a debt default in March.
Credit: Angelos Tzortzinis
Share

BERLIN, Germany — The Greek deal is still in jeopardy, as Athens tries to persuade its EU partners that it will stick to the terms of an urgently required bailout.

Yet patience is running thin in Europe. Germany in particular is showing increased frustration with the Greeks.

Finance Minister Wolfgang Schaeuble said that Berlin would not provide unlimited help for Greece. "We are very well aware of our responsibility for Greece and the Greek people," he told SWR radio on Wednesday morning. "As I have always said, we can help, but we can't pour money into a bottomless pit."

Schaeuble also complained that Greece’s conservative Nea Dimokratia (New Democracy) party did not appear to be fully committed to the austerity pledges that the parliament approved over the weekend.

Germany sees the party’s acceptance of the austerity measures as vital, considering it may well lead the next government after an April election.

Comments by the party leader Antonis Samaras at the weekend hinting that he might seek to renegotiate the terms of the bailout package did little to calm doubts in Berlin and elsewhere in Europe about Greece’s willingness to stick to the deeply unpopular program of cuts. On Wednesday, however, Samaras sent a letter to the troika committing his party to the austerity plan, Reuters reported. The letter sought to diffuse some of the uncertainty over the future of the creditor’s plan for Greece.

The nervousness about Greece’s commitment to meeting the EU demands was one of the reasons Jean-Claude Juncker, head of the Eurogroup of euro zone finance ministers, had cancelled a meeting planned for Wednesday. The 17 euro zone ministers are instead holding a conference call at 4:00 p.m. GMT (11:00 a.m. Eastern time).

Greek Finance Minister Evangelos Venizelos had insisted Wednesday that the “few remaining issues” would be finalized ahead of the call.

The so-called troika of international lenders — the European Unions, the European Central Bank and the International Monetary Fund — are hesitating to give Greece a 130 billion euros ($172 billion) bailout that it requires to avoid default. They have sought written assurances from the party leaders that they will stick to the deal.

Another sticking point has been the extra savings of 325 million euros that the troika say are needed to plug Greece’s funding gap. Athens had promised that it would make the cuts, but it is a sign of the growing mistrust in Europe that the troika want to see the exact details before approving the bailout.

Athens is also in talks with private lenders to get a 100 billion euro write-off on its debts. Both the troika bailout and the debt swap deal would have to be launched quickly ahead of a 14.5 billion euro bond redemption due on March 20.