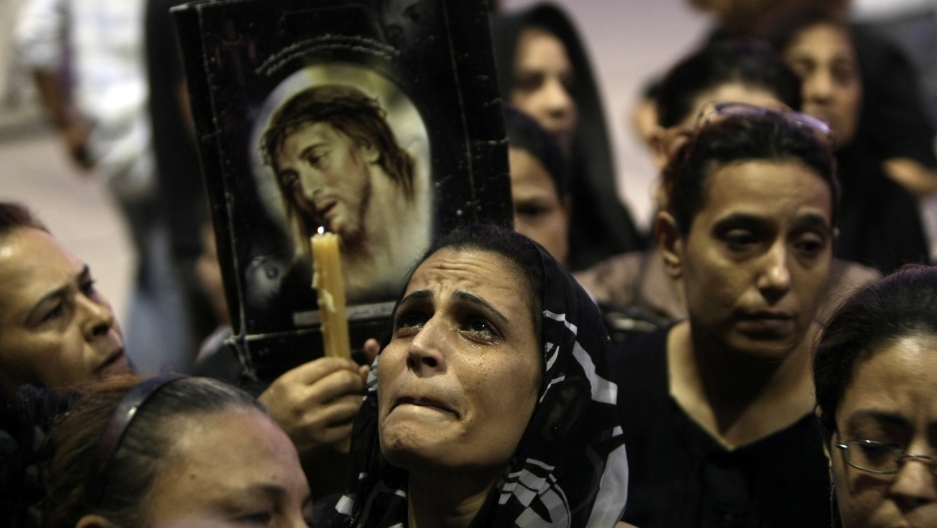 Coptic Egyptians attend a service at the Abbassiya cathedral in Cairo on Oct. 12, 2011 to mourn those killed during recent clashes with security forces.

Eight Coptic Christian families were evicted, and their properties put up for sale, following weeks of sectarian tension over rumors of a romantic affair between a Muslim man and a Christian woman.

Under the auspices of a local reconciliation committee that met Feb. 1, the Christians are now forced to leave their homes because their safety cannot be guaranteed, in a move a local rights group called “collective punishment.” (Arabic)

The incident in Alexandria presents the first test for Egypt’s Islamist-dominated parliament on how to resolve sectarian-related violence.

The People’s Assembly speaker, Saad Al Katatney of the Muslim Brotherhood’s Freedom and Justice Party (FJP), initially rejected calls by other deputies to discuss the eviction, but later referred the case to the assembly’s human rights committee.

FJP members were rumored to have either attended the reconciliation session or approved its verdict, sparking criticism from rights activists who say the Brotherhood should be more sympathetic to persecuted minorities.

Hostility among Egypt’s Muslims toward the Coptic Christian minority of about 10 percent has intensified since last year’s uprising gave way to a general breakdown in law and order. The tensions normally revolve around rumors of romantic affairs between members of the two communities, as well as conversions and accusations of illegal church-building.

Here is a brief list of some of the major sectarian-related incidents in Egypt since the popular revolt: