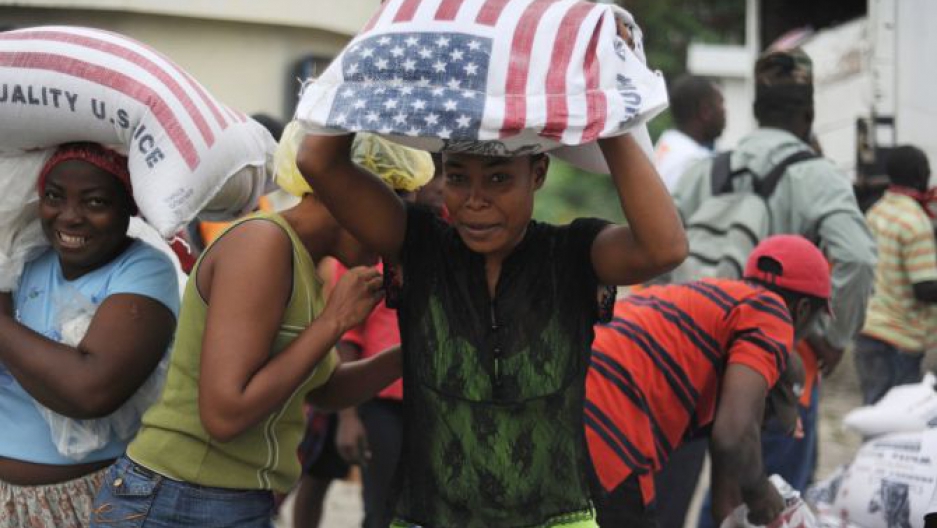 PORT-AU-PRINCE, Haiti — In the months following Haiti’s devastating January 2010 earthquake, the United States government spent $140 million on a food program that benefited U.S. farmers but has been blamed for hurting Haitian farmers.

The U.S. Agency for International Development (USAID) sent 90,000 metric tons of American crops to Haiti as part of the Food for Progress and its related Food for Peace programs run by USAID and the U.S. Department of Agriculture. That amounted to almost three quarters of the U.S. government aid to Haiti after the earthquake, according to documents obtained through a Freedom of Information Act request by the Haiti Justice Alliance, a Minnesota-based advocacy organization.

Critics said that sending American food aid to Haiti undermined thousands of Haitian growers who were already struggling against imports of cheaper rice and corn — staples of the Haitian diet.

“If you look at the allocation of food aid after the earthquake, the fact that most of it is (Food for Progress) means that the priority for the U.S. government was exporting food from the U.S.,” said Nathan Yaffe, Board Member of the Haiti Justice Alliance. “The evidence suggests that U.S. foreign aid is structured around our economic needs rather than the humanitarian needs of people we’re supposed to be helping.”

Mounting criticism of the perverse consequences of this kind of aid to Haiti has prompted Washington to give more careful consideration to the plan.

The U.S. Senate will commence hearings this month to hash out the next U.S. Farm Bill before the 2007 law expires in September and American agriculture policies revert to the 1949 version of the bill. Up for discussion is the controversial Food for Progress Title II food aid program, which has been criticized for undermining local agricultural production in developing nations like Haiti by flooding them with free or cheap U.S. food products.

“For those groups that are focused on international issues in the Farm Bill this is really the key issue,” said Karen Hansen-Kuhn, director of international programs for the Institute for Agriculture and Trade Policy. “In a time where budgets are really tight and likely to be facing cuts, there is more pressure to think about for flexible mechanisms like local and regional procurement to food aid.”

The 2008 Farm Bill appropriated $2.5 billion to be spent annually on Title II aid programs that send U.S. food products to foreign countries. It also set minimum amounts that must be spent on non-emergency assistance starting at $375 million in 2009 and increasing by $25 million each fiscal year through 2012. Last month, USAID announced it was accepting proposals for an anticipated $140 million in Title II programming in Haiti over the next five years.

USAID officials said they had been spending about $35 million a year on food aid to Haiti, but the figure spiked to $140 million in 2010 because “of the hugely increased food needs that occurred directly after the earthquake,” said Adam Reinhart, agricultural and food security adviser at USAID.

“Faced with the task of distributions to approximately three million people, we first were engaged in blanket food distributions. We then adapted and moved to a more targeted assistance,” said Adam Norikane, Food for Peace Officer at USAID.

“After the earthquake, the country needed food to help the victims in some places. But it’s not really necessary to send to Haiti a lot of food from the United States,” Jean-Baptiste said. “We received too much food, when locally it was possible to find food to buy to help the people.”

A 2009 study by the U.S. Government Accountability Office found it would cost the U.S. approximately the same to buy food for aid in Latin American countries. But the cost of switching to “local and regional procurement” in Haiti was highest of 15 countries studied.

USAID officials point out that during the 12 months around the earthquake, the agency’s direct food aid represented only part of total U.S. agricultural and food aid programs to Haiti. In this same period, Haitians received $47 million in vouchers or cash to buy food locally — though many staple foods found in Haitian markets are also imported and are often cheaper than Haitian products.

Today aid going to Haiti in the Food for Progress and Food for Peace programs supplements — it doesn’t replace — the diets of particularly vulnerable people such as children and pregnant and lactating women, U.S. officials said.

“This is the poorest of poor who are getting this,” Reinhart said.

USAID officials also said the amount of food sent to Haiti in this program equals a small fraction of the country’s total food imports. For example, Haiti already imports 26,000 metric tons of rice each month, or 80 percent of the nation’s consumption.

Still, the agency acknowledged the danger that such food aid can pose to local agricultural markets. An April 2010 USAID briefing warned that “in the medium and long term, large volumes of food aid would affect production as they would lower prices and thus reduce local production incentives.”

Because of a provision that effectively requires approximately two-thirds of Title II food aid to travel on U.S. ships, often the aid doesn’t reach its destination until the most pressing need has already passed.

The April USAID briefing concluded the impact of U.S. crops in Haitian markets just after the quake would be temporary. And Food for Progress spending in Haiti has since returned to pre-quake levels.

The U.S. government began purchasing American crops to export as food aid with the 1954 Agricultural Trade Development and Assistance Act, which aimed to expand U.S. markets. That act outlined minimum amounts the United States had to spend on the program each year regardless of humanitarian needs in other nations. Haiti Justice Alliance’s Yaffe said he believes this shows the U.S. government’s first priority was to recoup costs of the program, not to help foreigners in need.

In March, at a Foreign Relations Committee hearing, Former President Bill Clinton said it was a mistake to pressure Haiti into reducing tariffs on food imported from the United States, including rice. Clinton is now the U.N. Special Envoy to Haiti and has become a key figure in raising funds for Haiti’s post-earthquake recovery.

“Since 1981, the United States has followed a policy, until the last year or so when we started rethinking it, that we rich countries that produce a lot of food should sell it to poor countries and relieve them of the burden of producing their own food, so, thank goodness, they can leap directly into the industrial era,” Clinton said. “It has not worked. It may have been good for some of my farmers in Arkansas, but it has not worked."

In 1986, Congress also approved the Bumpers Amendment to the Foreign Assistance Act, which bars the government from helping farmers abroad increase the yields of crops that could compete with staple American exports. Critics like Jean-Baptiste say it’s the reason current USAID programming in Haiti focuses on developing export goods like mangos, cacao and coffee, but largely ignores staples like rice and corn.

One important USAID program in Haiti does include some rice and corn growers. The $127 million Watershed Initiative for National Natural Environmental Resources hopes to boost Haitian agriculture through training, better seeds and the use of new fertilizers. USAID claims to have helped 9,700 farmers increase their output since the program began in 2009.

Many Haitian farmers rejected the program, however, after they discovered that 475 tons of seeds were hybrids donated by Monsanto, the world’s largest developer of genetically modified seeds. Unlike traditional crops, hybrids do not produce new seeds that can be collected and planted the following growing season, meaning farmers in Haiti would need to begin purchasing the seeds from Monsanto or another company once donations stopped.

“In Haiti, people each year conserve their own seeds for the next year. But USAID doesn’t want to promote this kind of agriculture,” Jean-Baptiste said.

This reporting was supported by a grant from the Pulitzer Center on Crisis Reporting in cooperation with the International Consortium of Investigative Journalists. An earlier version of the story was published by the Center for Public Integrity at iWatch News.