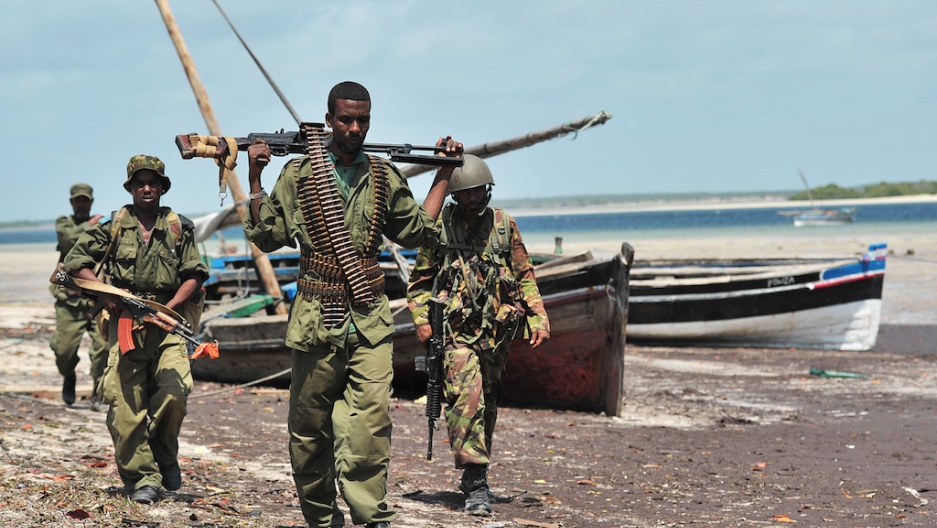 Militia allied with the Federal Government of Somalia and Kenyan Defence Force soldiers walk along the coast near Burgabo village, Southern Somalia on December 14, 2011. Burgabo is a Somalian port village which has been secured by Kenyan forces as they advance further up the Somali coastline in search of Al-Shabaab fighters.
Credit: Carl de Souza
Share

This should not come as a surprise. Al Shabaab pledged its allegiance to Al Qaeda in early 2009, a year after it was designated a Foreign Terrorist Organisation by the US. But the connection has always been loose.

Al Shabaab has employed Al Qaeda style tactics — roadside bombs, individual suicide bombers and coordinated suicide attacks — which indicate links in terms of training and therefore personnel. Some senior Al Shabaab commanders (including Godane) are Afghanistan veterans with personal connections to Al Qaeda leaders. And Al Shabaab has provided support to Al Qaeda operatives including Fazul Abdullah Mohammed, one of the masterminds of the US embassy bombings in 1998 who was shot dead in Mogadishu last summer.

In the 15-minute video message translated by the Site Intelligence Group Zawahri is quoted as saying:

"Today, I have glad tidings for the Muslim Ummah that will please the believers and disturb the disbelievers, which is the joining of the Shabaab al-Mujahideen Movement in Somalia to Qaeda al-Jihad, to support the jihadi unity against the Zio-Crusader campaign and their assistants amongst the treacherous agent rulers."

Zawahri's message was preceded by an audio recording of Godane in which he pledged allegiance:

"We will move along with you as faithful soldiers... In the name of my mujahedeen brothers, leaders and soldiers... I pledge obedience."

More from GlobalPost: UN re-establishes a presence in Mogadishu after 17-year hiatus

There are likely to be two impacts for Al Shabaab, one weakening and one strengthening.

On the one hand Godane's declaration will exacerbate existing divisions within Al Shabaab between those with a nationalist Somali agenda and those who wish to fight a more global jihad, thus weakening the group which is already under growing regional military pressure.

At the same time becoming a fully-fledged Al Qaeda franchise might bring Al Shabaab greater resources, more fighters and greater ambition to launch attacks outside Somalia, most likely in neighboring Kenya or Ethiopia, both of which have sent troops to Somalia in recent months to fight Al Shabaab.