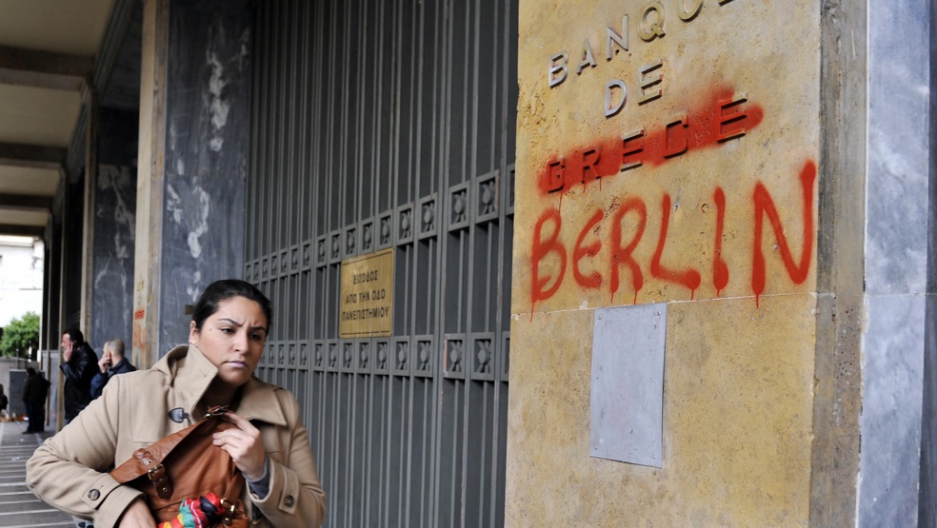 A woman passes by the Bank of Greece headquarters where 'Greece' was changed to 'Berlin' during a 24-hour general strike in Athens on February 7, 2012, in protest against new austerity measures demanded with increasing urgency by the European Union as part of a debt rescue deal with banks.
Credit: Louisa Gouliamaki
Share

BERLIN, Germany — As the country is crippled by a 24-hour strike, the government in Greece is edging toward a deal to secure the bailout it needs to avoid default.

Athens is reported to be preparing a document which lists the austerity measures and reforms to be implemented as part of the deal to secure the 130 billion euro ($172 billion) rescue fund.

Prime Minister Lucas Papademos negotiated into the early hours of Tuesday morning with Greece’s international creditors over the terms of the deal.

He will present the document to political party leaders in the early evening for approval. With elections due in April, Papademos needs the backing of all the political leaders before Greece can secure the funds from the troika.

Athens also needs a deal with the private creditors to slash 100 billion euros off the Greek debt they hold. The lenders have so far indicated they will accept a loss of more than 70 percent in a debt swap deal but they won’t conclude the talks until the bailout is also secured.

The pressure is on Greece to sign up quickly to a string of harsh reforms, including wage and spending cuts, in order to access the bailout ahead of a 14.5 billion euro debt repayment due on March 20.

However, ordinary Greeks are weary of shouldering cuts and reforms that seem to have done little to lift the economy out of the doldrums.

On Tuesday there were scuffles between strikers and riot police after around 10,000 people marched to the parliament on a day of industrial action designed to protest the austerity measures. The action closed ports and tourist sites and disrupted public transport.

Meanwhile, the head of the Eurogroup of euro zone finance ministers, Jean-Claude Juncker has said he backs a plan proposed by the German and French leaders to create a special escrow account into which Greece would pay the interest on the debts in incurs.

Chancellor Angela Merkel brought up the idea on Monday, following her meeting with French President Nicolas Sarkozy in Paris.

"I support, as the French president has, the idea that the necessary interest payments for the debt be paid into a separate account to make sure that Greece then consistently makes this money available," Merkel told a joint news conference.

Germany’s previous proposal to impose external surveillance on Athens in the form of a commissioner was roundly condemned in Greece and rejected by much of the rest of the European Union.

Yet an escrow account would likely give the troika strong control over the way Greece’s used the bailout funds.

If a deal is not reached Greece would likely default and possibly exit the euro zone, which it is feared would trigger contagion, pushing up the borrowing costs of other struggling countries, such as Portugal.

However, on Tuesday, the EU’s commissioner for digital issues, Neelie Kroes, argued that a Greek exit would not be a disaster.

"It's always said: if you let one nation go, or ask one to leave, the entire structure will collapse,” Kroes told Dutch newspaper De Volkskrant. “But that is just not true."

Kroes was critical of Greece’s reform efforts so far. "This is why the troika is back in Greece again, reporting for the umpteenth time that Greece is not living up to its promises: too few savings, too few reforms," she said. "It's becoming a Greek mantra: 'We cannot. We won't'!"

However EU Commission President Jose Manuel Barroso seemed to be of a different opinion about the risks posed by a Greek default.