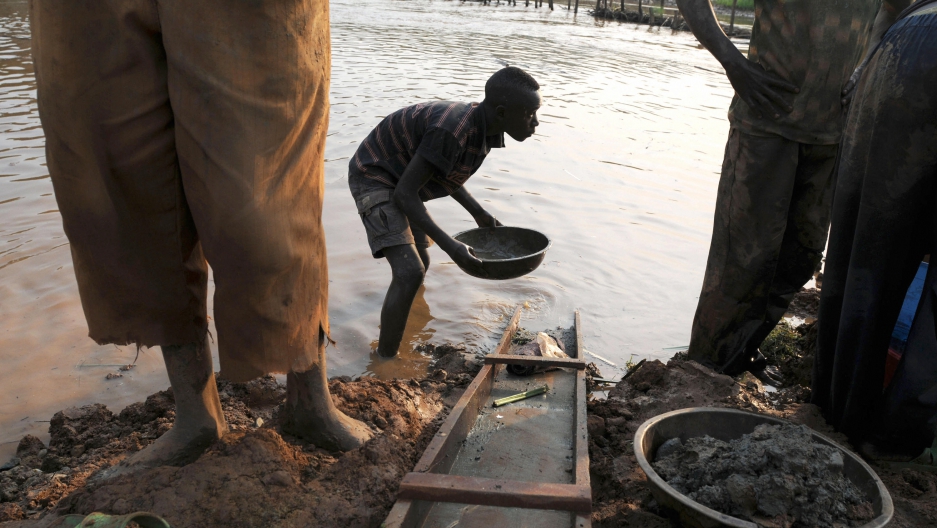 A boy pans for gold in a river on February 16, 2009 in Iga Barriere, 25 kms north of Bunia, north eastern Congo. DR Congo is rich in precious minerals such as diamonds and gold - but its people have gained little from this wealth because of conflict and bad government.
Credit: Lionel Healing
Share

NAIROBI — GlobalPost's Denis Fitzgerald is reporting the detail of a gold scam that involved a motley crew including Houston oil tycoon Kase Lawal, who is also an advisor to President Obama, along with former NBA star Dikembe Mutombo, U.S. diamond dealer Carlos St. Mary, and a Congolese warlord.

It's a brilliant, only-in-Congo tale, but it is also just the latest chapter in a story that we first reported back in March last year, and about which there will surely be more to come.

In short, Kase Lawal lost $30 million dollars in a botched deal which attempted to illegally smuggle 1,000 pounds of gold out of the DRC.

In a United Nations Security Council report, it is said the group expected to make a $10 million dollar profit off of the gold deal.

The report is 392-pages long and, being written by experts, it's also really only for experts, but luckily Jason Stearns, who once led the Group and now writes on his CongoSiasa blog.

In his blog he summarizes:

"The gold trade is booming and helps finance armed groups and criminal networks within the FARDC. It has not been affected thus far by the limited international efforts to promote due diligence in supply chains, as nearly all the gold trade goes unrecorded. We believe close to three tons of Congolese gold likely to have been smuggled out of Uganda to Dubai alone during 2010."

Here is his interview with former colleagues that helpfully summarizes the latest report and its key findings.