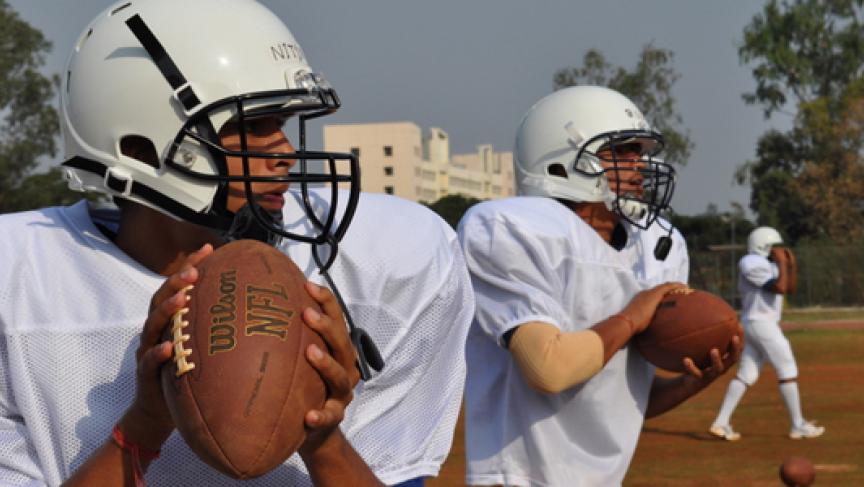 About 150 men dressed in T-shirts emblazoned with team names like the Vipers, the Blacktigers and the Gladiators gather in a field at the Balewadi sports complex in Pune.

The league has a lot of work to do before the official kick-off in November. For one thing, most of the players and coaches have to learn the sport. Some had never even heard of American football before showing up.

On the field, coach JJ Lawson tells the aspiring players that guards have to be big, strong, and fast. Lawson is a big man, who coached high school football in Louisiana for 15 years. Now he is here training Indian players and coaches. Lawson said that to play high level football, you need great athletes — and that requires a large population.

“India is such a large country that I just feel like it’s a great place for it,” Lawson said.

So far, about 400 players have been recruited from all over India. They come to Pune for boot camp. They look more like high school players than their beefy NFL counterparts. But they all have an athletic background.

Rajeev Dev Goel, head coach of the Pune Blacktigers, helped with the recruiting.

“We went to boxing clubs, we went to wrestlers, we went to judo places,” Goel said. “We even went to volleyball and basketball because we need some tall boys to collect the ball as wide receivers.”

Goel learned about football when he lived in the United States, and that’s true for some of the players as well. Sameer Tejani studied at Temple University in Philadelphia and became an avid fan.

“I’ve always been passionate for sports. But I never really got an opportunity to play a sport or represent a city or a country or even a club,” Tejani said. “So I thought, let me just give it a shot with American football.”

Tejani usually helps run his family’s business; he’s taking a break from that. But most of the players come from poor villages where few people have seen football.

For Dinesh, who plays for the Chennai Swarm, the chance to try a new sport wasn’t his only motivation.

He said he’s making enough to send home 12,000 rupees a month, about $230 dollars. The money will help pay for his sister’s wedding.

Dinesh showed his family some football on YouTube, and he said it scared them at first, but they’re excited now. He said he’s sure other Indians will want to watch football on TV.

That’s what Kevin Dieball, in Arizona, wants to hear. As one of the league’s investors, he said India’s booming economy means football has huge potential in here — even though cricket has been India’s sport of choice since the British Raj.

“I just think [football’s] more of a thrilling game and the physical aspect of it is really big,” Dieball said. “As the culture shifts towards that, I think that’s how we can be as successful, or more successful, than cricket in that country.”

Dieball and his fellow investors ultimately hope to sell the teams to companies and wealthy individuals in India. They’re banking on the players becoming superstars, like Bollywood actors and cricketers.

That could take some time. For now, Ashutosh Rathod, the quarterback for the Mumbai Gladiators, said when he puts on the uniform, he feels transformed.

“It feels really good because it’s new, and if somewhere history will be written, our names will be there,” Rathod said, “because we started it.”