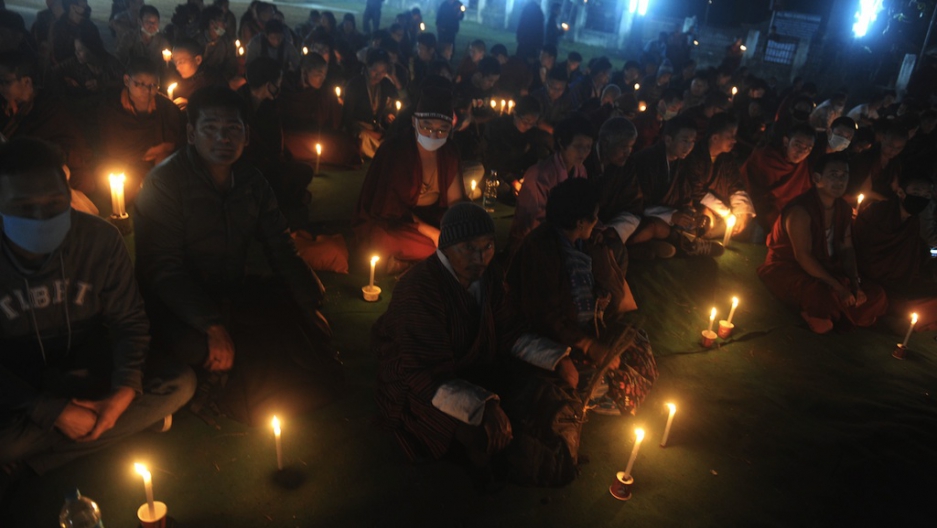 Buddhists attend a candle vigil by the Tibetan Community in memory of self immolations in Tibet during the eighth day of the Kalachakra Festival in Bodhgaya on January 8, 2012. Kalachakra 2012, a festival of teachings and meditations will take place from January 1, 2012 for ten days in the northern Indian state of Bihar and will be attended by Tibetan Spiritual Leader The Dalai Lama.
Credit: Diptendu Dutta
Share

In the wake of three more Tibetans reportedly immolating themselves over the weekend, Tibet's government-in-exile has asked for international assistance in negotiating with China.

In a webcast press conference on Monday, an official with the exiled government in Dharamsala said Tibetans worldwide would hold a vigil on Feb. 8 to draw further international attention to the situation in greater Tibet, which includes the Tibetan autonomous region in China and parts of other provinces.

In the past few months there have been 19 reported cases of Tibetans self-immolating in protest over Chinese rule of the region. The protests are believed to stem from China's tight control on Tibetans' religious practices and their calls to be allowed to recognize the Dalai Lama as a spiritual leader.

Radio Free Asia, one of the only international media organizations able to track events in the area because of tight controls on foreign journalists by China, reported that over the weekend, three Tibetan herders set themselves on fire in a Tibetan part of Sichuan province.

The region is not likely to cool down any time soon. In addition to plans for the vigil on Feb. 8, Tibetan New Year is coming up at the end of February, while March 10 marks the anniversary of a Chinese crackdown in Tibet. That date touched off violent protests in Lhasa and other parts of Tibet in 2008.