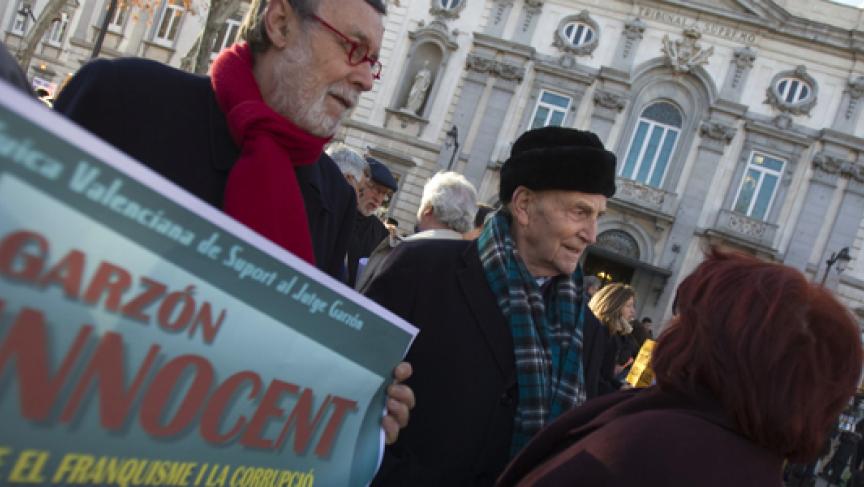 Share
This week in Spain judges have been hearing for the first time testimony from victims of the country's Franco-era violence. General Francisco Franco came to power in 1939 after a three-year civil war. During the war and after, more than 100, 000 civilians were killed or disappeared. A Spanish law that made investigating those crimes illegal is now being questioned. 81-year-old Maria Martin Lopez told Supreme Court judges how when she was six, Franco supporters came to her house and took her mother away. "They shot her," Martin said. "My father had me go with him to try to find her body. Later, we found her. They'd stripped her naked, and thrown her clothes in the brambles." Martin said they tried to complain to authorities but were told to drop the matter. "If not, they said, we'd end up just like my mother." Spaniards like Martin have long been barred from testifying in court by Spain's Franco-era amnesty law, passed in 1977. But a few years ago Spanish investigative judge Baltazar Garzon challenged the law and began to investigate. He argues that the killings were crimes against humanity. Garzon used the same principal to have the late Chilean dictator Augosto Pinochet arrested in 1998, despite Chile's own amnesty law. For trying the same thing at home, Garzon is now in the docket. Among victims, there is outrage that it is Garzon under investigation and not the crimes themselves. 75-year-old Pino Sosa Sosa, from the Canary Islands told judges that her father's whereabouts are still a mystery. "We're here for justice," she said. "They took my father from the house, beat him, threw him in jail. They took the sustenance of our house from us, because my mother fell sick afterward. She never could find him." Defenders of Spain's 1977 amnesty law say it remains the only way for Spain to move forward. Digging in the past, they say, could lead to political instability. But during testimony Maria Martin displayed a hand-drawn map of where she says her mother's remains lay. "Here, where the stream passes," she said, anxiously pointing to her scrap of paper. "There, right up next to the bridge." Garzon's prosecutors cut Martin's and others' testimony short, arguing the same point that has stunned international human rights groups: That this trial is about whether judge Garzon broke the law, not about who was killed by whom, more than half a century ago.