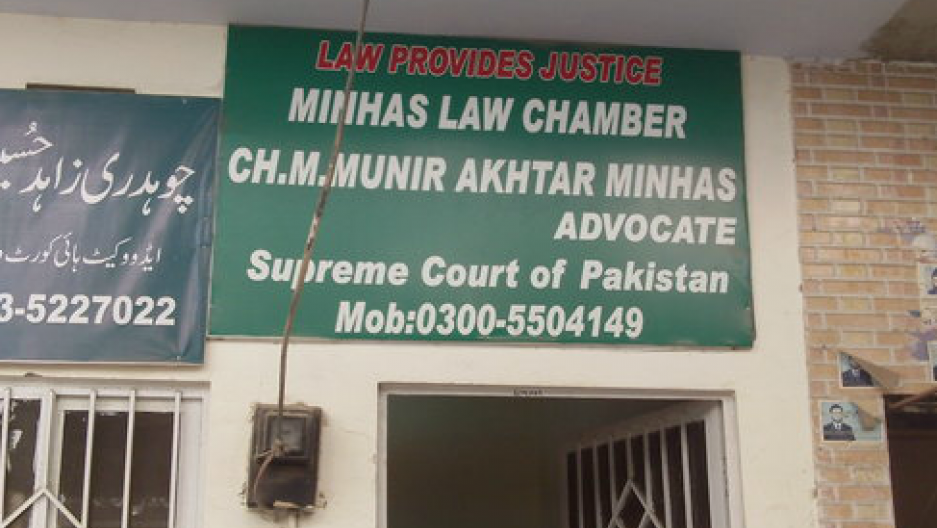 A sign outside a lawyer's office at the Rawalpindi District Court precinct advertises judicial services. (Photo by Laura Lynch.)

The Pakistani Supreme Court is charging Prime Minister Yousuf Raza Gilani with contempt of court after Gilani refused to obey a court order to reopen a corruption case against Pakistan’s president.

The court’s actions have raised the stakes at a time when the government has also faced pressure from the military. And it’s raising questions about whether the court is overstepping its boundaries and threatening the country’s stability.

The district court in the city of Rawalpindi looks more like a bazaar. There are lots of crowds and outdoor stalls. But the merchants here are selling legal services – a man taking affidavits, another copying documents for files. In this chaotic maze of buildings and alleyways, to find the actual courtrooms, look for the lines — long lines. Safraz Mahmoud is here, waiting for his day in court. And he said he’s been waiting for a very long time.

“The court system is really slow. Five, six year I am coming here. That case (should take) maybe one, but here it take five or six years,” he said.

Mahmoud said he’s come to court hundreds of times to try to resolve a dispute with his nephew over a parcel of land. He must travel far to get here and it costs him time and money.

Down another lane, lawyer Imran Abbasi went over a file with a client in his one-man office. No grandeur here, just a single desk, a few chairs and a lawyer who is fed up with overloaded courts that he said are leading to injustice.

Abbasi cited one of his clients, charged with murder more than two years ago and still far from knowing even when he’ll have his trial. Abbasi can list an endless string of reasons the case keeps being continued.

“One day one advocate is not present, the other day the other opponent advocate counsel is not present. One day the police did not bring the accused from the jail. One day we learned the judge has been on leave.”

He said he could go on and on. Then there’s the court that deals only with anti-corruption cases. He said he can’t get anything done there without paying bribes.

“This is disastrous for our lower courts. Corruption is at peak in that court,” Abbasi said.

For Abbasi, there’s not only frustration. There’s an acute sense of disappointment and betrayal. In 2009, he was one of hundreds of lawyers arrested for demanding the reinstatement of sacked Supreme Court Justice Iftikhar Chaudhry.

Chaudhry got his job back. But critics say he is now so focused on fighting battles with the government, he’s ignoring the problems he should be addressing within the justice system. Others, like lawyer Anis Jilani, blame the government.

“Frankly speaking, the system and democracy cannot function if the institutions continue to clash like this,” Jilani said.

Jilani has watched as the Chief Justice steered the court into unfamiliar territory, protecting the little guy. Chaudrhy’s court has intervened in cases involving discrimination and municipal planning decisions. Just a few days ago, the court announced it was demanding answers surrounding the deaths of more than a hundred people given tainted heart medicine. Jilani said that Chaudhry is only doing what needs to be done to hold government to account.

“Where he feels things are going out of control and the government is unable to handle the situation, he intervenes,” Jilani said. “He has this knack of grabbing and realizing the right opportunity. You can say, he has his hand on peoples’ pulse and he knows what people want.”

But it’s rulings like today’s contempt notice against the Prime Minister that are setting the court on a collision course with the government.

In conspiracy-rich Pakistan, some believe the court is doing the military’s bidding, a military that has had its own clashes with the government. Jilani discounted that, along with critics who say unelected judges are overstepping their authority.

“Someone has to intervene,” he said, “and I think it’s much better for the courts to intervene than the armed forces.”