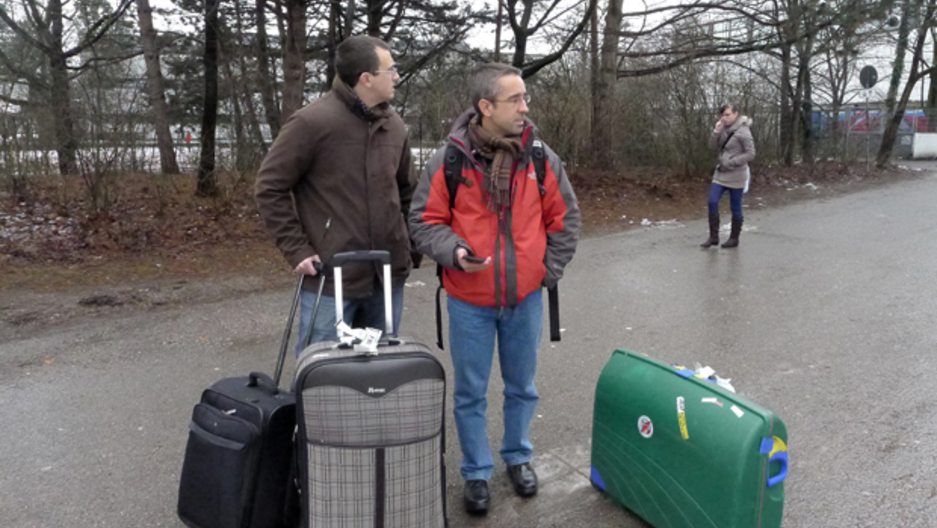 Spaniards Juan Alberto Fuente and Jose Sandino search for their new home — a youth hostel in Munich, Germany. They've just arrived in search of work. Both are experienced industrial engineers but Spain's economic crisis cost them their jobs. (Ph

Spain is home to more than 5 million unemployed people, according to the latest government statistics.

That’s about 23 percent overall — the highest rate since 1994. For the young, the jobless rate is nearly 50 percent. Now, a generation of desperate Spaniards is seeking work abroad. It isn’t the first time poverty has driven Spaniards from home, but in the past, unskilled laborers have led the exodus. This time, more of Spain’s most educated are leading the way.

Munich’s airport shuttle stopped downtown on a recent morning to let off arriving passengers. Among those getting off on the freezing sidewalk were Spaniards Jose Sandino and Juan Alberto Fuente.

Sandino and Fuente are 30-something industrial engineers, from Malaga, in southern Spain. Each has more than a decade of experience. But Spain’s economic crisis has left them jobless. And turned them into immigrants.

The two clean-cut, shivering men make their way to an information desk at Munich’s main train station, and try out their beginner’s German. After a long subway ride, and getting lost a couple of times on the street, Sandino and Fuente find their new, temporary home. It’s a giant youth hostel, filled mostly with young backpackers.

Their room is small and bare, with two wooden beds, a desk and a closet. It’s hard to believe now, Sandino says, but not long ago his construction consulting firm back home was netting him a six-figure salary. Then the housing sector collapsed and so did his business. Sitting on his bed, he said he can’t believe that just this morning he was saying goodbye to his girlfriend and family.

“This move has been complicated, he said, “because my girlfriend is pregnant, and alone now. Our baby is due in July, then they’ll come join me here, where we don’t know anything or anyone.”

Sandino and Fuente met during an intensive German language course this fall in Malaga, and decided to take the plunge together.

Fuente said he could have gone on indefinitely living with his parents, knowing he’d be taken care of. That's not his goal in life.

“If you send out tons of resumes and no one even calls you for an interview,” he said, “you have to go out and find work. You can’t just sit on your hands for years and years.

It’s not about the money, he said, but about feeling useful.

Spain’s nearly 23 percent unemployment rate is driving highly educated people like Fuente and Sandino abroad by the tens of thousands. This year more people left Spain than moved there for the first time in more than a generation. And Germany’s a principal destination. Here, unemployment is below 4%. But coming north is hardly a waltz through the edelweiss, said Cristina Rico, a long-time Spanish resident of Munich. The unprepared, she said, usually fail.

Having tea in a Munich café, Rico said a lot of Spaniards heard German Chancellor Merkel last year call for workers to come to Germany, and misinterpreted it.

“Spaniards have a distorted idea of finding work in Germany,” she said. “That it’s easier than it is. I’ve seen people come here and turn around and go straight back home. They had diplomas but didn’t speak English or German.”

And thus they had no way to communicate.

Cristina said that over the last year she was bombarded with so many emails from unemployed Spaniards curious about Germany that she started a Facebook page, called Spaniards in Munich. Every day people log on with questions about jobs, housing, healthcare, German courses — and diplomas. In Germany, with its strong vocational schooling, even so-called unskilled jobs require a certificate of study. For example, even to work in a pet-store you have to show you’ve been trained for it.

That’s what’s been frustrating 20-year-old Spaniard Ana Abad for more than a year. Abad came to Munich from Madrid without first finishing her university studies in communications. Now, she needs that diploma.

“I tried to find internships but it was impossible,” she said. “So I took this babysitting and housecleaning job in order to have money for my German language studies. I hope to finish my communications degree via long-distance by June."

And then hopefully find a job.

Several Spaniards said if you have a diploma and a decent comprehension of German you can usually find a job quickly. Economist Marten Olsen, with the IESE business school in New York, said one reason jobs are easier to find in Germany is because hiring is less costly and risky. He said the cost of hiring in Spain has risen 24 percent in recent years, because of wage and benefits increases.

At the same time, he said, productivity has stayed nearly flat. In Germany, he said, it’s been the opposite.

In other words, he said, it’s become cheaper to hire people in Germany than in Spain.

In the old days, Olsen said, Spain could have devalued its currency, the peseta, to stay competitive. That would help stem the exodus of workers in today’s crisis. But with the euro, that option is out.

Fuente says he's not optimistic about Spain’s future. He said he saw something that shocked him on his way from the Munich airport, and underscored the current difference between his home and here.

“The first thing I noticed was that there are tons of trucks on the German highways,” he said. “In Spain there are virtually none.”

Truck traffic is a major indicator of how productive your economy is, he said.

With young educated men like Fuente and Sandino leaving, there’s a growing concern that Spain may be undergoing an authentic brain drain. The government has played that down. And Spaniards here in Germany said even if it is true, it’s only temporary.

Most said they’ll go back to Spain better educated, with real-world experience and real money in their pockets.

But that’s likely to be years from now.