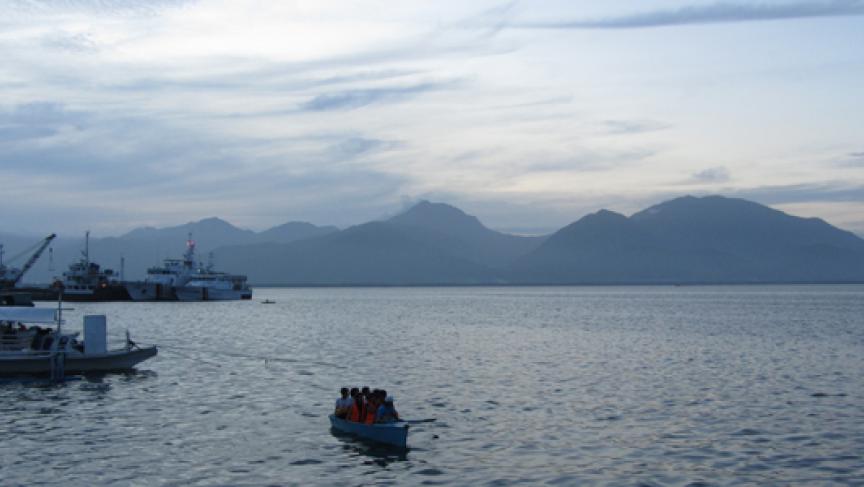 Palawan Bay in the Philippines is an important part of the country's claim to part of the South China Sea. (Photo: Mary Kay Magistad)

China’s got a big appetite for energy, and it's expected to double over the next quarter-century.

It already imports more than half of its oil and natural gas, and it’s looking to the resource-rich South China Sea as a source of supply. It claims nearly the entire thing as its own. But Vietnam, Brunei, Malaysia, Taiwan and the Philippines also have claims that conflict with China's. See a map of all of the nations' claims at TheWorld.org.

Sarah Osorio, bubbly and beautiful, 18, is enjoying her reign this year as both Miss Palawan and Miss Kalayaan — the name of a contested chain of islands in the South China Sea. Osorio joined the pageant to make a serious point — about the Kalayaan Islands.

“China’s claiming Kalayaan as its own,” she said. “The Philippines don’t have any capability to fight China. China is very big, compared to Philippines.”

Osorio grew up spending a month each summer on Kalayaan’s biggest island. It’s just a tenth of a square mile.

“We’re a small island — no activities, no entertainments,” she said.

There’s no electricity so after 6 p.m. so there’s nothing to do but sleep. So why do people even live there?

“To show that it’s ours, that we have that island for the Philippines," she said.

Osorio’s parents are among the 60 civilians who claim residence on Kalayaan’s main island, Pag-asu. The idea is just to have a presence — and Osorio’s family is doing its part. Her dad’s a local legislator. Her uncle lives there, too. He’s a fisherman. According to Osorio, he’s had problems with Chinese boats near the island.

It’s mostly shouting matches, she said. But there’s been more physical contact than that, in the broader South China Sea.

Over the past year or so, China has become increasingly aggressive about asserting its claim to almost the entire South China Sea, and the oil and gas reserves its seabed may contain.

When ExxonMobil announced in October that it had found what looked like a sizable natural gas field near the Vietnamese city of Danang, China warned that foreign companies shouldn’t proceed in waters that China claims.

The Philippines has had its own challenges. General Juancho Sabban, who heads the Western Command of the Philippine Armed Force, shows off what he calls a “Chinese donation” to his marine patrol boats — a confiscated Chinese fishing boat.

“They had GPS, they had radios. They had air compressors, for deep sea diving,” Sabban said, pointing out, you normally wouldn’t find much of that equipment on a fishing boat.

Sabban thinks this boat was doing surveillance. It tried to ram a smaller Philippine patrol boat, so, he said, the patrol had to shoot to disable the engine.

Similar boats have left construction materials near islands the Philippines claims. Sabban has promptly cleared them, because when this happened on Mischief Reef in 1995, the Chinese erected a structure almost overnight, and now have a permanent presence there. It’s just 130 nautical miles from the Philippines, but more than 600 from China.

According to the International Law of the Sea, a country’s Exclusive Economic Zone extends 200 miles from its shores. But China maintains it has a historical claim to islands even farther away, because it found them and named them first.

He pointed out that the Philippines can also cite historical records of its fishermen who went to China.

“So are we also legalized to claim the South China Sea?” he asked.

Sabban sees China’s assertiveness in the South China Sea as being less about protecting questionable historical claims and more about the fact that the Philippines and Vietnam are both opening up waters they claim to foreign companies. Shell and Chevron are already active in the Philippines, and the country is soliciting bids for 15 more offshore exploration blocks.

“This year, there will be more drilling in the West Philippine Sea, and we expect that by the end of this year, more rigs will be in place,” Sabban said.

Protecting an oil rig will be one of the military exercises the Philippines does with the U.S. military this spring. A Philippines delegation was just in Washington last week to talk about enhanced U.S. military support. Admiral Jonathan Greenert, Chief of Naval Operations, addressed U.S. interests in the area at the Center for a New American Security in Washington last month.

“This area is vital to the United States,” Greenert said. “It’s been an area vital to our navy and our focus for decades, because of our economy, our trade routes.”

Greenert said the challenge is to keep those trade routes open, while keeping belligerence to a minimum.

“How do you have a conversation with someone who is insistent that you’re in the wrong place? You either stop talking, or you keep talking, and you watch how you ratchet up the rhetoric,” he said.

China’s view is that the United States should mind its own business and stay out of the South China Sea. In November, Chinese Foreign Ministry spokesman Liu Weimin said, disputes in the South China Sea should be resolved through consultation between involved sovereign states. He added that any interference from outside forces would only “complicate matters.”

China would rather point out, one-on-one, to the Philippines that the $30 billion in trade it has with China could double in a couple of years. On the other hand, China could punish it, as the Communist Party-owned newspaper The Global Times has suggested, for turning to the U.S. for more military muscle to counter China’s claims. The Global Times also suggested that the “little countries” in the region should stop challenging China’s interests, or they’ll "hear the roar of cannon fire."

“The Chinese shouldn’t be telling us to get used to that,” Sabban said. “We have been hearing the sound of cannons for 40 years.”

Sabban cited the Vietnam War as an example of a small country can holding out against a superpower, when its core interests are at stake. It can hold out even better — when another superpower stands ready to come to its aid.