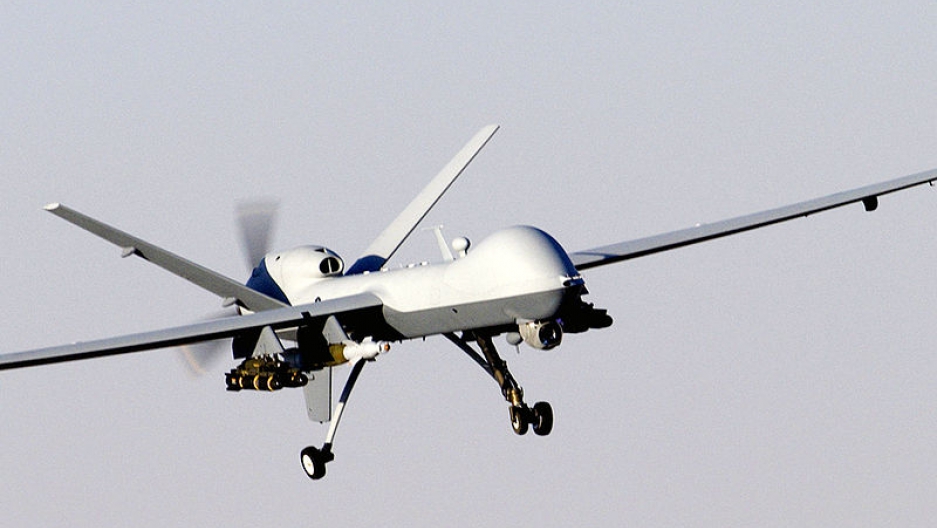 U.S. unmanned aerial vehicles, like the MQ-9 Reaper pictured here, have been used to attack terrorist targets in various countries in and around the Middle East. President Barack Obama discussed the program Monday. (Photo by Staff Sgt. Brian Ferguson via

The unmanned aerial vehicle program that the U.S. military uses in Pakistan, Yemen, Somalia, Afghanistan and had previously used in Iraq, among other countries, is one of the most well-known, least-talked about aspects of the American War on Terror.

But Monday night, President Barack Obama waded into the debate over the program during a "Hangout" he held with selected Americans on the Google social network, Google+. When asked about why more drone strikes had been used under his leadership than any other president, Obama gave an impassioned defense of the program and said there is a "tight leash" on the program.

"It's not a bunch of folks in a room somewhere just making decision," Obama said in the one-hour conversation, that was also streamed live on YouTube. "It is also part and parcel of our overall authority when it comes to battling Al Qaeda. There's this perception somehow that we're just sending in a whole bunch of strikes willy-nilly. This is a targeted, focused effort at people who are on a list of active terrorists who are trying to go in and harm Americans."

Some 130,000 questions were submitted for the event and just a small sample were answered by the president, in addition to the questions asked by the live audience. But that particular statement, relatively short, is drawing considerable attention both domestically and abroad.

Ilyias Khan, Islamabad reporter the BBC, said the story received major coverage in Pakistan on TV and the Internet.

"It goes without saying in the Pakistani context," Khan said. "Generally, people think it's only a technical point, which President Obama has made. Everybody knew these strikes were coming from the Americans."

Khan said Pakistanis don't necessarily agree with Obama's statement that the strikes are targeted. There have been many reports of civilian casualties from collateral damage from on-target drone strikes.

And sometimes, the wrong target is hit, he said.

"But for the most part, the collateral damage has mostly remained confined to women and children or unconcerned people being present in the same compound as the legitimate target," Khan said. "Mostly, the perception is the drone strikes have been precise."

"Generally, the outcry has come from organized religious groups, mostly based in the Punjab province of Pakistan," Khan said. "This is where mostly the Pakistani military comes from. I think at some point, it became a suitable policy option for the Pakistani security establishment, to prop up some kind of voice that would oppose these strikes."