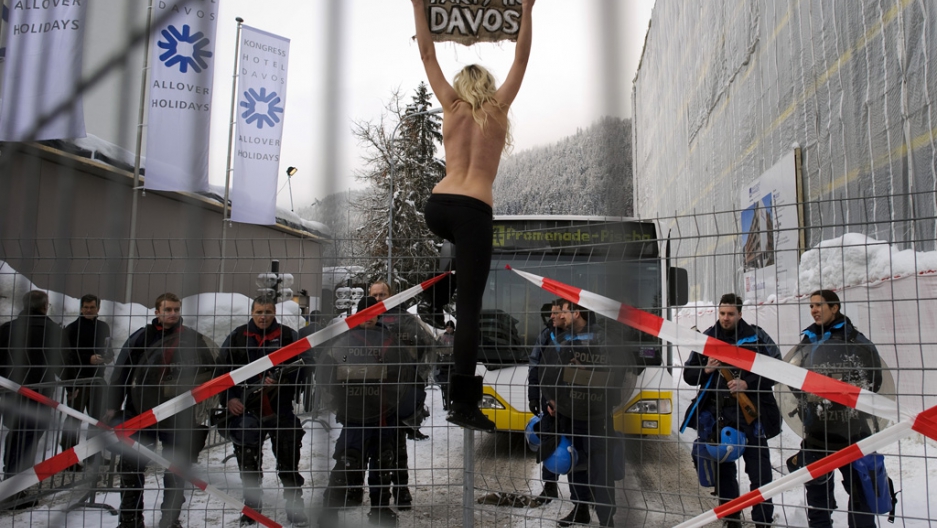 An activist from the Ukrainian group FEMEN shouts slogans during a topless protest at the World Economic Forum in the Swiss resort of Davos on Jan. 28, 2012.
Credit: FABRICE COFFRINI
Share

Police detained and later released three topless protesters today after they stripped to the waist outside a World Economic Forum event in Davos, Switzerland.

The trio, from the Ukrainian group FEMEN, carried banners that read “Gangsters party in Davos” and “Crisis made in Davos” while shouting “Poor because of you.”

Police stopped them at the gates of a complex as world economic and business leaders met inside.

"We came here to Switzerland to Davos to explain the position of all poor people of the world, to explain that we are poor because of these rich people who now sit in the building," FEMEN representative Inna Schewcenko told the Associated Press.

Police detained them only after the attempted to climb a fence into the compound.

FEMEN is quickly gaining notoriety for staging PETA-like protests with topless women drawing attention to political causes. They have appeared outside the trial for former Ukraine Prime Minister Yulia Tymoshenko, The Telegraph said, and railed against sex tourism and women’s rights in the Middle East.

FEMEN has also protested at the home of former IMF chief Dominique Strauss-Kahn in Paris and at St. Peter’s Basilica after Pope Benedict delivered a November service, Agence France-Presse reported.

Temperatures in Davos hovered around the freezing mark.

"In this building now there are a lot of men but only a few women, the same way as in each parliament and in each congress," Shevchenko told reporters, the Telegraph said. "In Ukraine, we have a cabinet of ministers only for men. There are no women. We are coming there to scream, using women's voices, women's bodies to explain that women need to decide also."

FEMEN protests happened as the Occupy movement ramped up its profile there.

About 40 protesters also marched and chanted slogans, but didn’t garner nearly as much attention as the three topless Ukrainians.