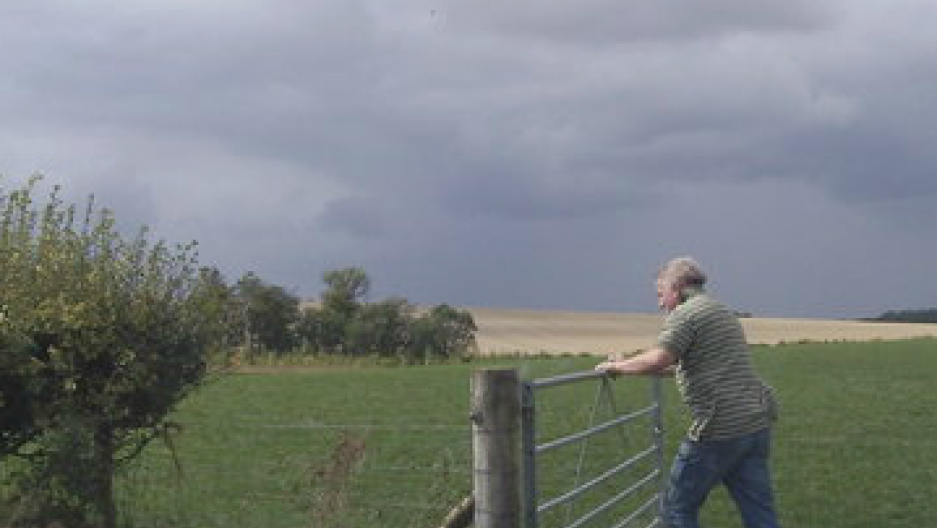 Robert Low is trying to make his farm in Royston, U.K., more efficient in the way it uses nitrogen-based fertilizers. (Photo by Laura Lynch.)

Robert Law raises sheep and grows sugar beets, wheat, barley oats and rye on his farm about an hour north of London.

It’s a big operation set on nearly 4,000 acres of rolling hills near the town of Royston. One key ingredient makes it all flourish — nitrogen fertilizer. Law said he uses it for almost all his crops, because his land is inherently very low in naturally-available nitrogen, which plants need to thrive./p>

Law is hardly alone. The invention of nitrogen-based fertilizer in 1909 helped fuel a global agricultural boom, and it’s been crucial in feeding a growing population ever since.

But a growing number of scientists say that boon to our food supply has come at a big cost — massive, nitrogen-based pollution.

Mark Sutton, of the Center for Ecology and Hydrology in the United Kingdom, said the threat to the environment is large

“We’ve known for many years that using nitrogen for fertilizer is a great thing for farming to increase productivity,” Sutton said. “But there’s a whole range of threats resulting from this nitrogen leaking into the environment."

Nitrogen is an inert gas that’s necessary for life. But we’re changing it into forms that are harmful, overloading the environment with it, and throwing the natural nitrogen cycle out of whack, Sutton said. Nitrogen compounds running off farmland have led to water pollution around the world, while nitrogen emissions from industry, agriculture and vehicles make a big contribution to air pollution.

Sutton said the cost is immense. Last year he was part of a team of 200 scientists from 21 countries who studied the problem in the European Union. They calculated the dollar value of the damage from nitrogen pollution at between $90 billion and $400 billion per year.

The cost comes to both the environment and human health. For instance, Sutton said, particulate air pollution caused in part by nitrogen shortens the lives of many Europeans by more than a year. Overall, the EU report estimated that the cost of nitrogen pollution in the EU is more than double the value that nitrogen fertilizers add to European farm income.

“So these are significant issues,” Sutton said.

The EU study is the first to calculate these costs in Europe. But Alan Townsend, an ecologist at the University of Colorado, insists nitrogen pollution is “unquestionably” a global problem.

The U.S. is also a major hotspot, and big problems are emerging in China, Southeast Asia and Latin America. The impacts of nitrogen pollution can be hard to recognize. Big environmental disasters like oil spills tend to grab all the attention, Townsend said, but “there is essentially a nitrogen spill everyday.”

The irony is that in the right places and chemical forms, nitrogen is valuable stuff. Every ounce of fertilizer that runs off a field into a river is a waste of resources and money. But Townsend said it’s a problem that shouldn’t be that hard to solve.

“This is not one of those problems where we sit around scratching our heads and say, ‘Man this is going to be a disaster, how are we going to deal with it, there’s nothing we can do,’” he said. “A lot of the solutions are right in front of us. It’s just about moving down that path.”

That path includes increasing the use of technology to cut nitrogen pollutants from power plants and vehicles, which is already widely used in the U.S. and Europe.

Cutting nitrogen pollution from food production is a more complicated challenge, but Townsend says on the farm field itself, it comes down to a simple principle: use fertilizer more efficiently.

“We have to approach it as an efficiency problem,” he said. “How do we maximize the benefits that we’re going to get from this stuff and minimize the unwanted consequences?”

Law is trying to rise to that challenge. He prides himself on running a farm that’s not only productive, but environmentally sensitive.

His tractor now sports a small computer console that his farmhands use to ensure each field gets only the exact amount of fertilizer it needs, depending on the crop, the season and the weather.

“We just program each individual field as we come to it,” said farm worker Mark Moule. ”Just press start and finish and one minute you’ll be putting 50 kilos on per hectare, next minute it’s 150.”

That kind of precision helps reduce the amount of nitrogen that runs off farm fields into nearby streams. It can also help save money on fertilizer.

But this kind of technology is expensive, and many smaller farms can’t afford it.

For his part, Law is willing to look for even more efficient ways to use fertilizer. But he warns that Britain and the rest of the world face a growing challenge when it comes to feeding a growing population.

It’s a global trend — less farmland and more mouths to feed. And that will only add to the challenge of getting rid of the excess nitrogen we’ve been putting into the environment.