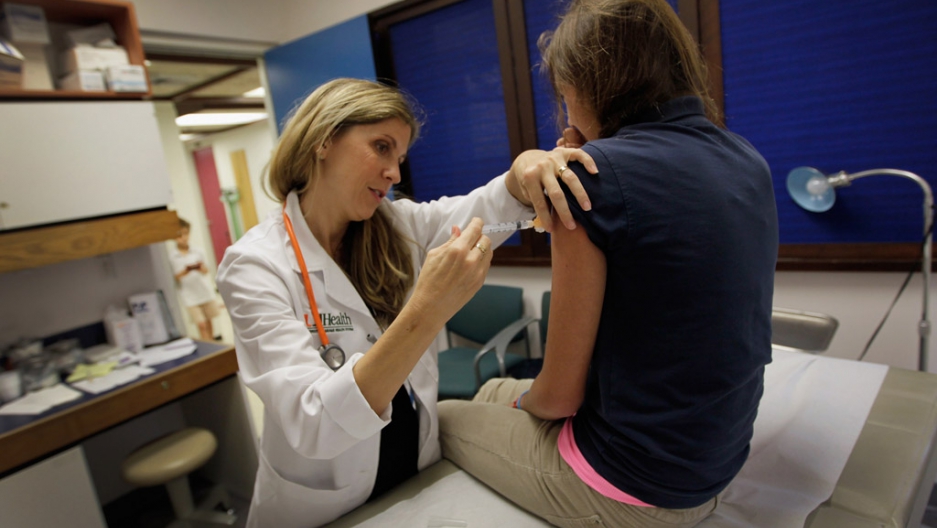 University of Miami pediatrician Judith L. Schaechter gives an HPV vaccination to a 13-year-old girl. The vaccine for human papillomavirus, or HPV, is given to prevent a sexually transmitted infection that can cause cancer.
Credit: Joe Raedle
Share

A study released by the American Society of Clinical Oncology in the January 26 issue of the Journal of the American Medical Association has found that 10.1 percent of men were infected with HPV of one type or another, compared with just 3.6 percent of women. The disease affects 16 million Americans a year.

The reason for the higher rate among men was unclear, though the men in the study tended to have higher numbers of sexual partners than the women. However, those statistics only accounted for 16 percent of the difference in virus prevalence between sexes, The New York Times reported. One theory is that hormonal differences in women may play a protective role; another speculation is that oral sex on women causes a greater rate of transmission, according to the Times.

As part of the new study, researchers tested nearly 6,000 men and women ages 14 to 69 at mobile examination centers. Scientists took oral samples and used DNA testing to identify the HPV types they carried. They also asked questions about the subjects' lifestyles, drug and alcohol use, and sexual behaviors, according to the New York Times.

HPV is extremely common in America: it affects up to 80 percent of men and women at some point in their lives, according to the Los Angeles Times. The disease is transmitted to the mouth area by intimate contact, including oral sex.

A three-step vaccine that prevents HPV has long been recommended only for girls as a way to prevent cervical cancer. However, a federal advisory committee recommended expanding routine use of the vaccine to adolescent boys and men at high risk in October. The finding that infections affect men more than women may give more substance to that recommendation, The New York Times wrote:

“I think pediatricians might find that helpful information in talking about vaccination with the parents of boys,” Dr. Maura Gillison, the lead author and a researcher at Ohio State University, told reporters. “I think there’s a lot of information here that can further stimulate research into prevention.”

However, the study "provides us some reassurance" that most people with oral HPV will not get oral cancer, Dr. Gillison told CBS News. Fewer than 15,000 Americans get HPV-linked oral cancer each year, CBS reported.